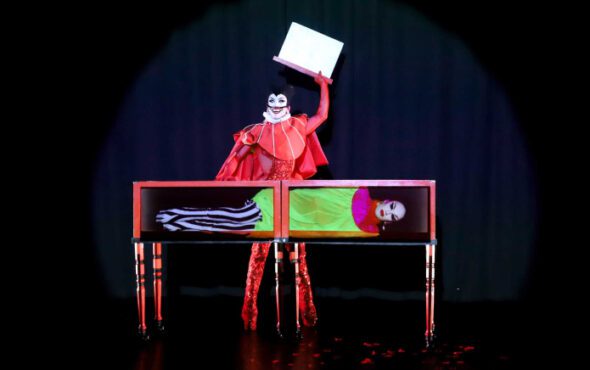 We’re sure Sasha Velour needs little in the way of introduction by now – having won the ninth season of RuPaul’s Drag Race she’s gone on to tour the world with her critically-acclaimed show Smoke & Mirrors, which she previously brought to the London Palladium prior to the pandemic. We caught the revival of the show this week at the Eventim Apollo; she’s about to take the tour over to mainland Europe before returning to the UK in April for dates in Plymouth, Bath, Edinburgh, Newcastle, Glasgow and Liverpool.

And what a show it is – a cerebral high-concept drag experience, full of imagination and stunning set-pieces. This is not what you might think of as a ‘conventional’ drag show – there’s no singing, there’s no comedy routine (although Sasha’s patter at various intervals is witty), and the choreography, while effective, is limited and hardly the star of the show. Instead we’re presented with two hours of intriguing and unusual ideas, and a selection of sickening looks. It’s a real variety show, with segments inspired by high-art, musicals, circus and a whole host more besides.

What makes this so impressive is the smart use of technology throughout. Following on from early drag shows, in bars which didn’t have spotlights but did have projectors, Sasha has clearly honed her skills at using the resources at her disposal – the video content isn’t just there to look nice (although it really does look great) but it genuinely augments the on-stage action. The way Sasha interacts with the projections, or the way they’re used to introduce or set up certain segments of the show – it all really works extremely effectively. Of course there are some more traditional elements – as expected, she does perform a lip sync to Whitney’s So Emotional. Are rose petals involved? Absolutely. Are we expecting it? Of course we are – but it doesn’t matter. It still looks great and is greeted with rapturous applause. It speaks volumes that this is arguably not the highlight of the evening – it’s a wonderful moment, but this is a show full of them. Well worth picking up a ticket when it returns to the UK later this spring.