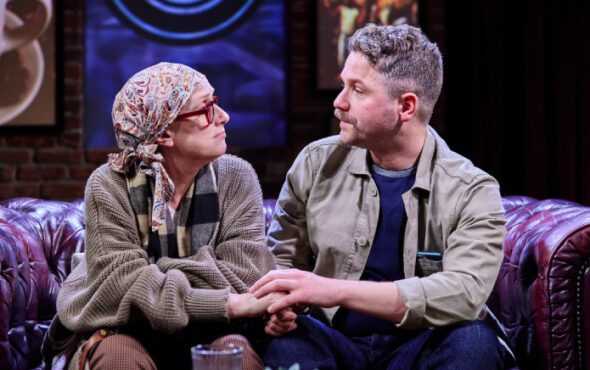 Photo: The Other Richard

Earlier this week we caught the European premier of queer play Steve, written by Mark Gerrard and directed by Andrew Keates, which debuted off-Broadway in 2015 and earned itself a Critic’s Choice from the New York Times. Towards the end of the evening, our protagonist, the titular Steve (David Ames) started to ponder philosophically whether just enough is ever actually really quite enough. We came away from the 7 Dials Playhouse wondering the same – there’s plenty in the show that we enjoyed, but did it give us everything we wanted?

A little context – this is the first play to open at the 7 Dials Playhouse, formerly the Actor’s Centre in Covent Garden, and it’s a new 100-seat studio space. We loved the venue as soon we walked in – decked out to resemble the Joe Allen restaurant in New York, there are attentive waiting staff at the counter and a pianist on-stage as we arrived, really creating the ambience of being in a restaurant. There are even tables on the stage that audience members can book for a more immersive experience. It all sets the scene perfectly.

Steve focuses on a group of middle-aged gay men and their lesbian friend, and explores a number of queer issues including relationships – both romantic and platonic – as well as themes like getting older and monogamy. Given the title of the play it’s not surprising that there are countless timely Stephen Sondheim references – in fact, the press night performance was dedicated to the legendary late Broadway composer. There’s a poster in the restaurant for Merrily We Roll Along; the pianist tinkles away on Sunday; the text is dripping with Sondheim references, from Getting Married Today to Being Alive. There are also nods to iconic musicals from other composers, including an amusing gay joke about You’re The Top from Anything Goes.

It gets a lot right. As mentioned, the venue itself looks gorgeous – we couldn’t fault the set or staging. The restaurant atmosphere is perfect, the other scenes are created simply but effectively, and there are a handful of other elements, such as projecting text – for example, when a conversation is being conducted in Spanish, or when characters are texting on their phones. We have a selection of solid acting performances, too – David Ames shines in the lead role, and we’re already big fans of Jenna Russell who brings a real authenticity and honesty to her character Carrie, who has won recognition for her cancer blog. Having said this – it feels like there’s something missing. This is a comedy and while it’s fairly amusing throughout, there are only a handful of big laughs – the zingers are few and far between. Don’t get us wrong, it’s enjoyable enough to watch, it’s entertaining, but we felt like it was going to give us something more. Similarly, it explores some interesting ideas and opens conversations that we’ve certainly been having over the last few years – around equal marriage, how much value members of the queer community attach to heteronormative ideals, whether we should aspire to society’s conventions when we have a plethora of options at our disposal – but it doesn’t really shed any new light on these concepts, nor does it draw particularly satisfying conclusions.

So what we’re left with is a show with plenty going for it, but doesn’t quite come together as we’d have liked: lots of individually enjoyable elements which sadly don’t add up to more than the sum of their parts. It’s perfectly pleasant to watch and 90 minutes pass quickly enough, and while it undoubtedly gives just enough, we left wanting a bit more.