A Letter To My Younger Queer Self, by Tim Nelson from Cub Sport 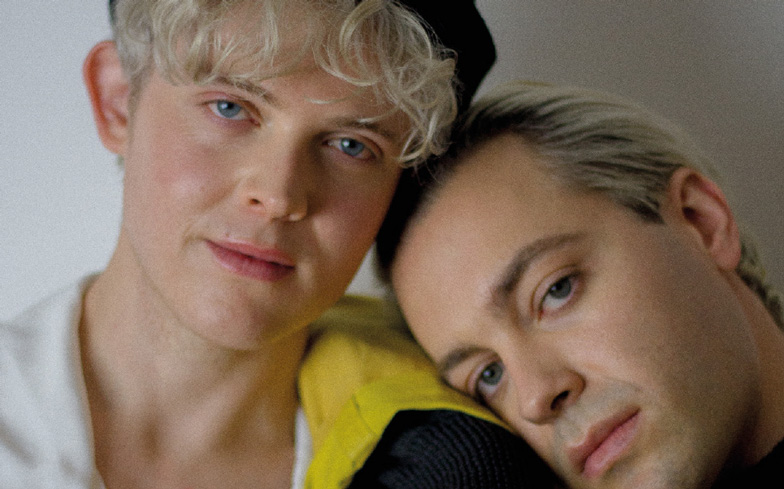 Tim Nelson reflects on the journey to his truth – joined by fiancée (and fellow band member) Sam Netterfield.

My family moved from New Zealand to Australia in the 1990s shortly after I was born. Homosexuality had just been officially decriminalised nation-wide in Australia which, in retrospect, might seem like progression, a step forward, but it also illustrates the long shadow of homophobia that is cast throughout the country. It wasn’t until decades after homosexuality was decriminalised that I felt comfortable enough to come out and it would be another two years until the Australian government would allow me to marry the man I love. My sexuality is, of course, only one facet of my identity, but the journey to reconciling and accepting this facet has been long and arduous.

Growing up, I felt stifled by the idea that there were traits and interests I should or shouldn’t have, just because I’m a male. While my family always encouraged me to pursue music and art, it became apparent at an early age that these were far outside the purview of the quintessential Aussie bloke. It’s possible that had I been attending school a few decades on, my experience might have been different. Instead I found myself strung between two immense forces of equal gravity; my true self, and the person I thought I should be. For many reasons, school for me did little to aid my self-acceptance, this is to put it lightly. As was my tendency, I gravitated towards girls socially; we had far more shared interests and it was a lot more fun, but I was well-aware of the fact that this marred me as ‘different’. I felt embarrassed and ashamed.

At the time, I saw the ideal Australian man as athletic, outspoken and ‘tough’ – qualities that did not come naturally to me. Creativity and emotional expression were considered girly and to engage in that type of thing made you a wuss. These insults are, of course, code for something far more shameful, and this implication was never lost on me. As a result, I always felt like the closer I could be to a strong, masc, straight male the better my life would be – those were the types of guys who were popular and celebrated, and so that became my benchmark for masculinity and acceptance.

Related: Dr Ranj Singh Gaysians cover interview: “As queer Asians, we have so much to offer ourselves and to the wider world”

The path that my journey has taken has been punctuated by a series of steps forward and backwards, and though I’m now at a place where I’m incredibly proud of my queer identity, I’m in no way immune to the residual insecurities brought on by the cis male gender norms that dominated my formative years. Take the music videos we’ve made so far on the BATS campaign, for example. They’ve all had strong queer signalling, which I’m super proud of – I’ve followed my creative vision more fearlessly than ever before, and critically the reception has been positive. Each time, however, at some point between shooting the video and releasing it, I’ve found myself feeling anxious that perhaps the outfits and makeup, or the intimacy between my fiancé Sam and I, might make people feel uncomfortable, or that I could encounter the same sort of destructive comments that kept me in the closet for so long. In these times of doubt, I always try to remind myself that I have the opportunity to provide the queer representation I needed when I was younger and that I still need today.

I wouldn’t change anything about the path my life has taken, nor change the lessons I’ve learned at the times I’ve learned them – it’s all brought me to where I am. But there are things I’m in the process of unravelling and understanding that would have been great for my younger self to hear (and things that I still need to remind myself):

1 Don’t let people make you feel ashamed because you’re not as ‘masculine’ as some of the guys around you.
2 It’s cool that your favourite music is Britney Spears – never be ashamed of that.
3 It’s okay that you don’t really like sport.
4 Art is cool.
5 Music is cool.
6 Pink and purple are seriously great colours, and you don’t have to pretend that your favourite colour is blue.
7 It’s good to be gentle.
8 It’s good to care about peoples’ feelings.
9 There isn’t a specific way that you should speak, speak with the voice that comes naturally to you.
10 Don’t feel ashamed of your feminine traits! Women are strong and beautiful – being compared to a woman is something to be proud of.
11 You don’t have to pretend to be attracted to girls and try convince yourself that you are; it’s not gonna happen.
12 Don’t be afraid of what the people around you think – the good ones will stick around.
13 Your parents aren’t going to be ashamed of you for being yourself, even if it’s not necessarily what they were expecting.
14 You’re exactly how you’re meant to be and you’re perfect – don’t focus your existence on trying to be ‘normal’.
15 You don’t need to feel embarrassed about wanting a Barbie.

To be honest, I feel like I’m still in the process of letting go of the confusion and shame that surrounded my childhood and early adulthood – it’s going to take time. As I embrace my true self more and more, my perspective keeps changing and it’s becoming easier to truly release myself from the internalised homophobia that has followed me for most of my life. I’m sure that in another year I’ll have a bunch more things to add to the list above – I’m just not far enough out of it to look back and reflect with total clarity.

Fortunately, the social and political landscape in which I now find myself is evolving. I feel like there has already been a considerable societal shift here in Australia since same-sex marriage was legalised late last year and it will only keep getting better as we see more queer athletes, politicians, musicians, actors, writers etc around the world standing proud and representing a community who, for so long, have been made to feel like they should be hidden. Some of the most powerful players in the game right now are queer – from artists like Troye Sivan, Frank Ocean, Kaytranada and Romy from The XX to the new Speaker of NYC Council, Corey Johnson, who is openly HIV-positive and was a pioneer in LGBTQ rights.

There’s a long way to go, but the world is becoming a kinder, more empowering place for individuals who don’t necessarily ‘fit the mould’ and I’m determined to do everything in my power to contribute towards that change.

More information on Cub Sport can be found here.