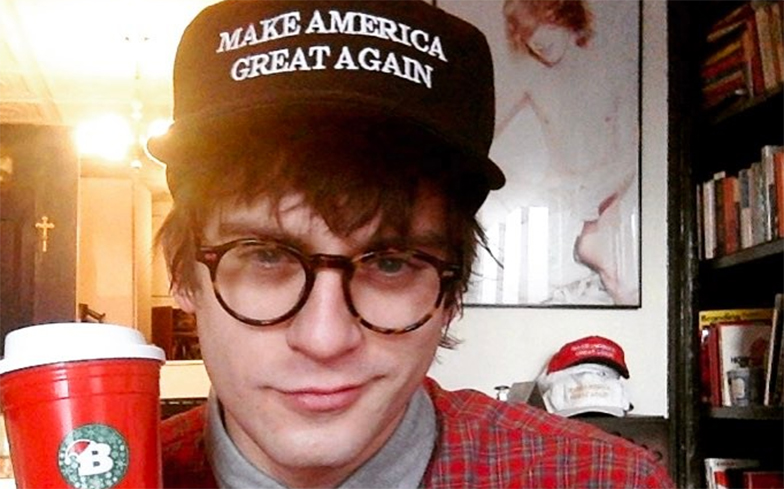 A gay White House correspondent has been arrested during an altercation at a university speech.

Lucian Wintrich, who works for far-right website Gateway Pundit, started the Twinks For Trump movement ahead of the 2016 presidential election in an attempt to garner support for Donald Trump.

The 29-year-old made an appearance at the University of Connecticut on Tuesday night to deliver a speech titled “It’s Okay To Be White”, which unsurprisingly received a frosty response from the crowd of around 350 students.

When a woman took Wintrich’s speech off his podium and walked away with it, he ran after and physically grabbed her, which is when the altercation occurred and he was arrested by UConn police.

BREAKING: @lucianwintrich appears to attack a @UCONN student during speech after she took something off podium. pic.twitter.com/WAcNYAak7c

#BREAKING @UConn cops just arrested @lucianwintrich for assaulting a student during his "It's ok to be White" speech. Cops have cleared the lecture hall. @WTNH #CTnews pic.twitter.com/ZRmNT0SOo4

Winterish was held for an hour as students continued to protest outside, and was charged with breach of peace and released on $1,000 bail.

A student was also arrested for breaking a window.

“This was a very disappointing evening,” UConn’s president Susan Herbst said in a statement.

“Thoughtful, civil discourse should be a hallmark of democratic societies and American universities, and this evening fell well short of that.”

Wintrich later took to Twitter to comment on the situation, saying he was “disappointed” with the response to his speech.

“It’s really unfortunate that some of the kids felt the need to be violent and disruptive during a speech that focused on how the leftist media is turning Americans against each other,” he said.

It's really unfortunate that some of the kids at @UConn felt the need to be violent and disruptive during a speech that focused on how the leftist media is turning Americans against each other. Tonight proved my point.