Trans influencers savagely beaten by homophobes as onlookers did nothing 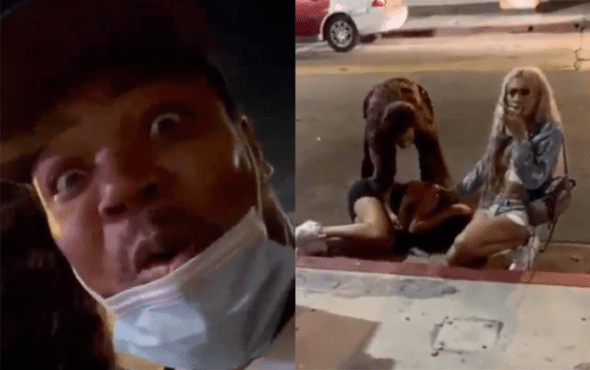 Eden the Doll, Jaslene White Rose and Joslyn Flawless were beaten, robbed and mocked by a group of men in Hollywood Boulevard, while onlookers – including the police – did nothing to intervene. One of the men recorded the entire altercation and posted it to social media.

Following the incident, Eden tracked down his Instagram handle and reposted it to her story, telling followers that her phone was stolen by one of the gang as they waited for an Uber. When she attempted to retrieve her phone, they threw rocks and stole Joslyn’s bag.

In the video, the men can be heard laughing as Joslyn, who recently underwent hip surgery, falls to the ground.

One man can also be seen throwing a scooter at Jaslene, before another “bashes” her head open, leaving her unconscious on the side of the road. When Eden asked the men to call an ambulance, they laughed once again and joked that Jaslene was “dead”.

“They mock me as I cry for help,” Eden wrote in her story. “This is the scariest moment of my life. I hear sirens and pray that we finally get saved. The cops stopped, looked and kept driving… my heart sank I thought this was it.”

She continued: “More people kept walking past us. No one is stopping no one is helping no matter how much I begged.”

Jaslene said: “This was the most traumatic thing that ever happened to me. Not just the fact that I was hit by a grown man, but because there were so many men watching this happen to me and my friends. And we begged for someone to call the police, but they were too busy recording and laughing.”

Joslyn also revealed that one of the men “held a crowbar to my face and threatened to kill me unless I stripped my shoes off and gave him my jewellery and possessions,” adding: “He said if i was trans he would kill me. He then forced me to hold his hand while he looks for my friends to kill them for being trans.

“Meanwhile men and WOMEN screaming that I’m a man and telling him to beat me. Please help us find them. PLEASE.”

Eden, Jaslene and Joslyn’s followers have since reported the Instagram account, username ‘yoodavion’, which has since been deleted. If you know any details about the attack, make sure to contact the Los Angeles Police Department.

Transgender people – particularly Black trans women – face disproportionate levels of violence and discrimination around the world. In the United States, the number of trans individuals murdered has surpassed the total for all of 2019, and we’re just seven months into the year.