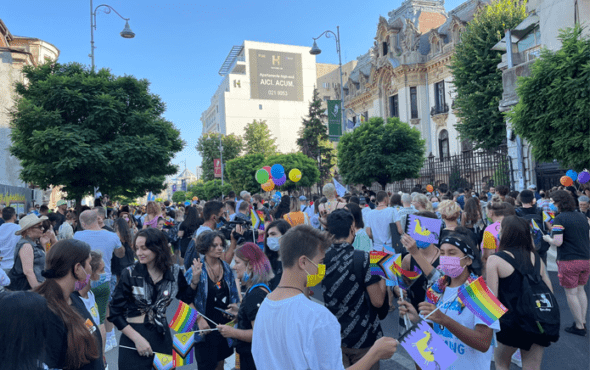 Several thousands of people marched through the Romanian capital of Bucharest to show solidarity with the LGBTQ+ community.

On August 14, around 2000 people showed support for the LGBTQ+ community in a Pride march by waving flags and wearing Pride-themed clothing.

The Bucharest Pride march has been an annual event running since 2004.

However, Ion-Rotaru expressed the need for greater state protections as rights and security as the community still feel unsafe.

An opinion poll run by Eurobarometer, in 2019, found that 38 per cent of Romanians agree that gay, lesbian, and bisexual people should have the same rights as heterosexuals, while just over 50 per cent disagreed.

This year’s Pride march in Bucharest is particularly significant as this year marks the 20-year anniversary of when Romania decriminalised homosexuality for more than 19 million people.

Homosexuality was decriminalised in Romania in 2001, however, the conservative country bans marriage and civil partnerships for same-sex couples.

The spirit of Pride was shared online by attendees of the parade, fellow LGBTQ+ supports and Romanian political figures.

“Today the Bucharest Pride is happening. We had to fight for it to take place in the city centre, but it’s here and I am proud to represent a country with European values. Lots to do still, but we will get there!” Romanian politician Nicu Ștefănuță shared online.

“Happy Pride to all the participants in the Bucharest Pride March today! We hope you have a wonderful celebration of our shared love and diversity,” the Embassy of Ireland to Romania, Republic of Moldova and North Macedonia posted on Twitter.

Happy to be part of #bucharestpride with a Swedish collague today! #HumanRights belong to all! #Pride2021 #ComeOut #SpeakOut #LGBTQ pic.twitter.com/mjywBV0SNP