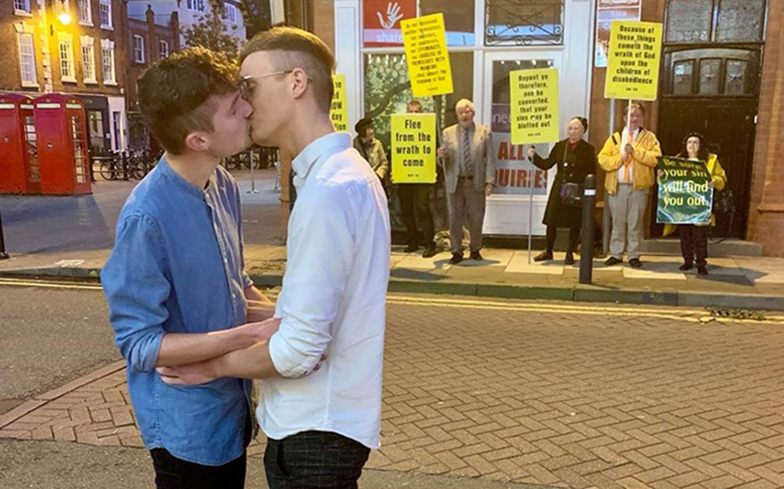 A gay couple from Chester have gone viral after sharing a kiss.

Joe Fergus and Robert Brookes had been to see a production of queer favourite The Rocky Horror Show at the city’s Storyhouse Theatre earlier this month, but were met with anti-LGBTQ protesters when they left the show.

The small group of homophobes, who are reportedly representatives of the Zion Tabernacle Protestant Evangelical Church in Chester, held yellow signs with various religious verses on them in protest of the LGBTQ community and the show.

But that wasn’t going to stop the couple enjoying their night, and they had the perfect response to the protesters – a kiss.

“When haters be hating, the best thing to do is spread the love,” said Joe.

A photo of the moment was shared by Chester Pride, and received a great response from Facebook users, with one calling it “the best photo I will see in a long time”, and another adding: “This needs to go viral. This is iconic. All you need is love.”

Another person wrote: “I live in the US. My feed is usually chock full of what horrifying thing Trump has done this hour. It’s all pretty awful. This photo and story did my heart good. It’s beautiful.”

Storyhouse Theatre, who are displaying rainbow flags at the venue and on their social media profiles, also voiced their support for the couple and the wider LGBTQ community.

“To everyone coming to The Rocky Horror Show tonight and this week: Storyhouse is and always will be a safe space. We celebrate and support LGBTQ+ communities – always. Let’s have a FABULOUS night and week,” they wrote on Twitter.

“To those who are protesting: #LETSDOTHETIMEWARPAGAIN”

“When we arrived, there was lots of shouting between the protesters and audience members waiting outside the theatre. The problem with that is you can’t fight hate with hate, which is why we decided to spread some love,” Joe told PinkNews of the kiss.

One protester allegedly shouted “You’re an abomination” at the couple, but audience members who had been to see The Rocky Horror Show cheered in support of them.

“We wanted to stand up for our rights and our community and I strongly encourage others to do the same,” Joe continued.

“I respect everyone is entitled to their opinion, however, I am also entitled to kiss my boyfriend wherever I want without judgment, and that’s what we are fighting for.”