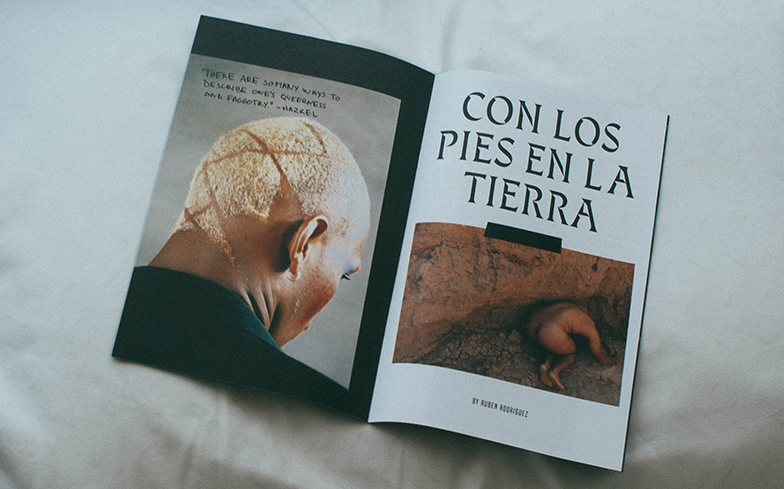 BRUNCH CLUB is an NYC based zine aiming to connect, uplift and celebrate queer people – especially those of colour.

In the age of Tr*mp and as our hard-fought liberties seem to be slipping from our grasp all over the world, there’s never been a more important time for LGBTQ people to unite. With many in the community feeling increasingly overlooked or erased from mainstream media, there’s been a resurgence of zines – a DIY publication of curated content aimed at a specific audience. BRUNCH CLUB is one such zine.

Founded by Colby Anderson, the zine was endorsed early on by Hello Mr and then received queer attention from all over the world. As BRUNCH CLUB prepares to create their second issue, we caught up with Colby to discuss the power of reclamation, queer media’s evolution, and LGBTQ people’s affinity with poetry. Why does the world need zines like BRUNCH CLUB?
A friend and I launched BRUNCH CLUB in 2017 through Hello Mr.’s residency program called ‘The Issues’. The residency gave us the opportunity to learn the ins and outs of creating a magazine, and allowed the first issue of BRUNCH CLUB to be printed and live within Hello Mr issue 09! As both of us are queer people of colour, we decided to use our new platform, and make it our mission to help elevate the voices of people who look like us. We’re inspired by these young queer creatives who have a lot to say. We want to listen and share our platform.

Queer media is often whitewashed and homogenised – do you think that representation is getting better?
I do think that representation is getting better. I grew up hardly ever seeing people who look like me on magazine covers; much less on tv. I think back to when I was growing up, how many people of colour were hosting their own talk show? The only person who quickly came to mind was the most obvious, Oprah. Now there’s people like Lilly Singh- the first woman of Indian-origin to host a late night show in the United States – she’s also bisexual! – and RuPaul who just announced his upcoming talk show. Representation in the media is changing, but we still have a long way to go.

What is it about the DIY, zine format that speaks to marginalised people?
I think zines feel more accessible to people and make them feel closer to a community. They’re personal and are able to say things / bring about change without being these big fancy publications.

When so many people can find words like ‘faggotry’ offensive, how are you reclaiming it and what does it mean to you?
I moved to New York three years ago from Texas. Being called a ‘faggot’ in the south, is not something that is usually celebrated – ha! I’ve sort of evolved since living in New York, and have gotten to know myself a bit better. It’s amazing what reclaiming words that are usually used to hurt can do to a person. It’s very powerful. Since moving to New York I’ve realised that being a faggot means to be confident. It means having a core queer community that you spend your time with, and not being afraid to show your feminine side in public.

Poetry can sometimes be seen as an ‘old-world’ art-form and yet so many queer people have a close affinity with it. Why do you think this is, and why was it important for you to feature it in BRUNCH CLUB?
I think a lot of queer people use poetry as a way to come into themselves. A lot of us grow up reading works from Audré Lorde and James Baldwin, two notable queer people of colour. Maybe poetry is the language of the community?

In your next issue, you’re exploring what it means to be queer in 2019 – what does it mean to you?
Being unapologetically yourself is what being queer means to me in 2019, this is something I work to achieve everyday. I also believe having a core queer community that you spend your time with adds so much to a person’s queerness.

Finally, when is your next issue out, and how can people help you?
Our goal is to have the next issue printed in June, just in time for pride 2019! Anyone can help support us by donating to the Kickstarter campaign, or just sharing the campaign with family and friends. We’re so grateful for the support we’ve received so far and absolutely cannot wait to share this issue with everyone- it’s a total fantasy.

You can donate to BRUNCH CLUB’s Kickstarter here, and follow them here.