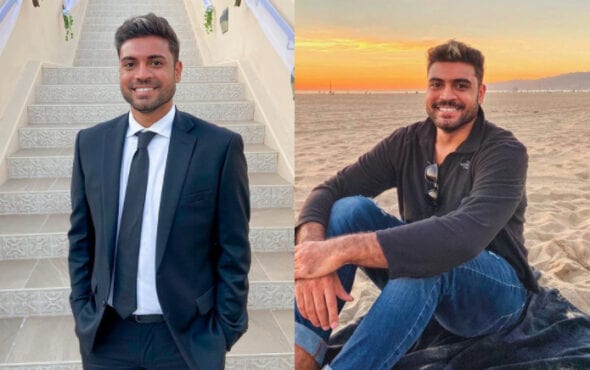 “I would rather you guys hear this from me than a news article. Mat was killed in a hit and run last night”, she wrote.

“I don’t really have any words right now, I wish I could contact everybody who knows him personally but the news is already out and I just can’t do it right now.”

According to a report from CBS Los Angeles, a white BMW hit George in the Beverly Grove community at around 2:20 am. The paramedics pronounced his death at the scene.

The Los Angeles Police Department is currently investigating the incident and asking for the public’s help in identifying the suspect.

“Thank you to everybody who’s reached out, I’m really sorry but I probably won’t respond for awhile even if we are close,” she said.

“And thank you so much to everybody telling stories and sharing how he impacted you. Whenever you think of him in the future, please do talk about him.”

Thank you to everybody who’s reached out, I’m really sorry but I probably won’t respond for awhile even if we are close. And thank you so much to everybody telling stories and sharing how he impacted you. Whenever you think of him in the future, please do talk about him

Okland went on to reveal via the She Rates Dogs Twitter that the two had recorded a new episode of their podcast before George’s passing, but has postponed its release.

George’s co-host also said that his fans meant the world to him, stating: “He’d shed tears when people told him he had helped them through issues (especially LGBT+ related).”

Over the last year and a half, George had cultivated a dedicated following for his work on the podcast and his social media profiles.

The 26-year-old generated thousands of likes for his relatable and often humorous content surrounding pop culture and LGBTQ+ topics.

In a 2020 interview with Shoutout Arizona, George said he hoped his endeavours would help LGBTQ+ people feel “like they’re not alone.”

“Growing up and being in the closet, I never knew anyone or heard about anyone who had similar experiences and fears that I had,” he said.

“The most rewarding moments are when members of the LGBTQ+ community reach out to me and tell me what a difference I’ve made in their lives.”

helped them through issues (especially LGBT+ related). He referenced DMs from you all the time and how much it made his week & fueled his joy. You really did know him. He shared so much because he felt the people who listened to him were his friends.