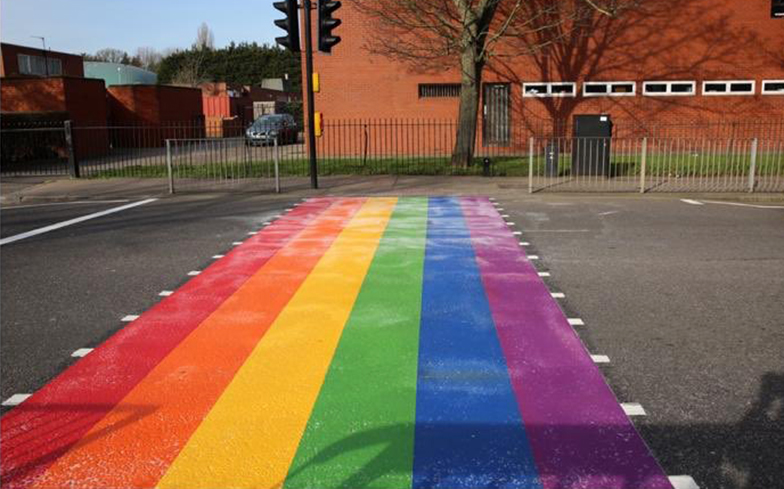 A school in London says it has received abusive messages over a rainbow crossing.

Woodside High School in Wood Green painted the rainbow crossing outside its building last week in honour of LGBT History Month, which is celebrated through February. It’s believed to be the first UK school to have a rainbow crossing.

While the installation has received plenty of praise from parents and from people on social media, the school also revealed that it’s received over 200 abusive messages in just four days.

“This may seem shocking to some, but for the LGBTQI+ community, threats, aggression and hate is a regular occurrence,” the school wrote on Twitter.

A spokesperson for the school confirmed that the abusive messages did not come from parents or anyone connected to the school.

Gerry Robinson, head of Woodside High School, said the hate “only encourages us further” to promote inclusivity and acceptance of the LGBTQ community.

“This rainbow crossing stands for our commitment to championing equality, for our children’s rights to be respected and able to thrive as themselves, in school and beyond,” she said.

“The hundreds of abusive messages regarding Woodside’s work on equality will not deter us from continuing our work. In fact, it only encourages us further for we do not want our students to go out into the world and face such hate.”

She added: “Never has there been a more important time to stand up to hate in all its forms and education is a key part of that.”

Woodside High School was awarded the Stonewall School Champion Gold award in 2017 for its commitment to tackling homophobic, biphobic and transphobic bullying.

The rainbow crossing was funded by Haringey Council, who said the school’s commitment to diversity, equality and inclusion is “something we should all celebrate”.