Ruth Hunt: “Our movement is not dimmed until every LGBTQ person is accepted without exception” 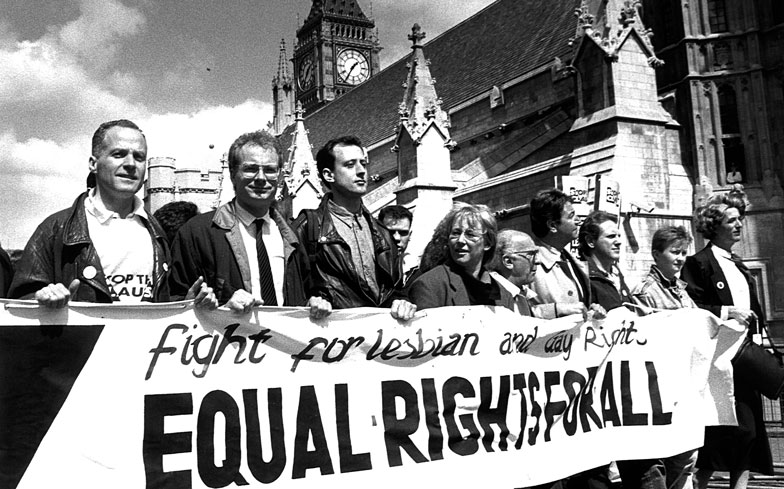 Pride season is the highlight of the LGBTQ calendar every year for many in our community. Up and down Britain, from Cardiff to Manchester, Lincoln to Aberdeen, thousands of people come together and celebrate the progress made towards equality for all LGBTQ people.

When I was 15, knowing that lesbian, gay, bi and trans people were getting together to show how proud they were of who they are was hugely exciting and inspiring. Every year we see more and more people showing their pride in their own hometowns. Every year, Stonewall helps more young people attend their first ever Pride. Being together, celebrating our community is what makes Pride season so important. But Pride should also be a time to reflect on how much more we have left to do.

Without a doubt, we have made tremendous progress as a movement. We have same-sex marriage and equal parenting rights. We have an openly gay leader of a political party who is now expecting their first child. But for many LGBTQ people these legal changes have not translated into true equality. The number of reported LGBTQ hate crimes is on the rise in Britain. Since 2013, the number of lesbian, gay and bi people who have experienced a hate crime has increased by a staggering 78 percent. In the past year, one in five lesbian, gay and bi people (21 percent) – and two in five trans people (41 percent) – have experienced a hate crime or incident because of their sexual orientation and/or gender identity.

Only a few months ago, Bermuda became the first country in the world to legalise and then repeal same-sex marriage legislation. This devastating and alarming news is a stark reminder of just how fragile our hard-won rights are and that progress is not necessarily permanent.

This year also marks the 30th anniversary of the introduction of Section 28. This was a nasty piece of legislation that banned local authorities from ‘promoting homosexuality’ and effectively stopped teachers from talking about LGBTQ issues, or properly supporting LGBTQ pupils. It was only repealed in Scotland in 2000 and the rest of the UK in 2003. The homophobia and biphobia it encouraged is shockingly recent history. Our research shows that nearly half of LGBTQ pupils (45 percent) – including 64 percent of trans students – are still being bullied for being LGBTQ. What these statistics and stories make clear is that the fight for equality is far from over. Anti-LGBTQ discrimination continues to affect many people’s ability to feel comfortable in being who they are in our society.

Just look at the vicious attacks we see against trans and non-binary people in our media almost every day. Debates about whether trans experiences are valid, and deeply misleading headlines of young people being ‘turned trans’ echo the way lesbian, gay and bi people were targeted under Section 28. This vitriolic opposition to trans equality from a small but loud minority of voices from both outside of and within our own community is a reaction to the government’s commitment to reform the Gender Recognition Act and simplify the process of getting a Gender Recognition Certificate. Reforming a system that is currently bureaucratic, demeaning and deeply intrusive for trans people is one of the major pieces of legislative change that still needs to happen to advance equality.

History is repeating itself, and it’s trans people at the centre of an onslaught of hate. It’s naïve for anyone to think that the struggles of our trans friends will not be extended to the wider LGB community. The camp lad and the butch dyke will inevitably be caught up in this new policing of ‘what is man enough’ and ‘what is woman enough’. Their fight is our fight and it’s our collective responsibility to stand together with and in support of trans and non-binary people.

Pride started as marches against  discrimination and abuse and that spirit of protest and solidarity is still very much needed. We cannot be complacent. It’s time to get active. We have to guard against going backwards in our legislative and social gains. Legal equality is not enough. We need to change hearts and minds across Britain and make LGBTQ rights and equality something that matters to everyone. This is why Pride is such a crucial opportunity for LGBTQ people and allies to stand together and come out in support of LGBTQ equality. There are more than 120 Pride events taking place across the UK this year. Some will be happening for the first time, like Grampian Pride in Scotland. This means there’s more opportunity than ever to come together and celebrate our diverse LGBTQ communities. However, we should also reflect on the challenges international LGBTQ people are facing. What happened in Bermuda also shows the difficulties we face as a global family in advancing global LGBTQ rights. Overseas many Prides take place under armed guard or not at all. 72 countries still criminalise same-sex relationships and in more than half of the world, LGBTQ people may not be protected from discrimination by workplace law.

This doesn’t mean we can’t be proud of what we have achieved or discouraged about the challenges that lie ahead. It means we need to work harder to bring in, learn from, and amplify the voices and experiences of diverse LGBTQ people who haven’t traditionally been heard. True equality doesn’t exist unless it is shared by everyone. Extending equality to others doesn’t take away from anyone else. This is a lesson history has taught us time and time again.

I’ve been doing this work for a long time and I’m very optimistic about what we can accomplish. The LGBTQ community is one of the strongest groups out there. If we could watch each other’s backs a little more, the world would be a much better place. We should never forget that we are a force to be reckoned with, especially when we are organised and remain committed to the cause. We are stronger as a united community.

Let’s ensure that the defiant spirit that inspired our movement is not dimmed until every LGBTQ person is accepted without exception. That is the meaning of Pride. And it is something we can all be proud of.

More information on Stonewall UK can be found here.