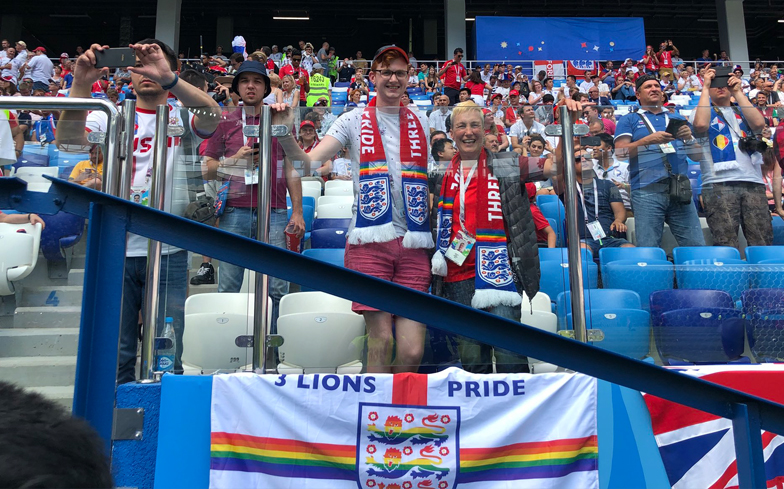 A gay England fan was told to take down his rainbow-themed flag during a World Cup match in Russia over the weekend.

Joe White was at England’s fixture against Panama on Sunday and held up a Three Lions Pride flag adorned with the rainbow colours.

However, when a steward saw what he was holding, he asked him to take down the flag before the match had started.

“One of the supervisors has gone and taken [the flag] down and taken it away. They said ‘oh you’re not allowed those colours in here’, meaning the rainbow flag so that’s obviously an issue. It was a touch and go situation but it got put back up in time for the game,” Joe explained.

“I think for me I started getting really annoyed and angry because we had these reassurances.

“We’ve come over not just to support England, which is obviously a huge part of why we’re here, we’re here because we are England fans but also to show solidarity with LGBT Russians.

“It was frustrating more than anything else. It did start to tarnish it a little bit.”

Joe and his fellow Three Lions Pride supporters immediately flagged the issue with FIFA and the Football Supporters’ Federation, who intervened and overruled the steward’s decision.

The flag was then caught on screen during the broadcast of the match, which saw England win 6-1 against Panama.

The Three LIons Pride flag has been approved by the Football Association, who has pledged their full support.

“We have been building links with LGBT+ fan groups by using England home games as a focal point,” a spokesperson for the FA said.

“We continue to support their good work, and back their use of a Three Lions rainbow crest at the England games at the FIFA 2018 World Cup.”

During the country’s recent Presidential election, an advert ran which warned people that they would have to live with a gay person if they didn’t vote. And a recent poll found that 83% of Russians consider gay sex to be “reprehensible.”

In 2013, Vladimir Putin signed into effect a gay propaganda rule, which banned the promotion of “non-traditional” sexual orientations to minors