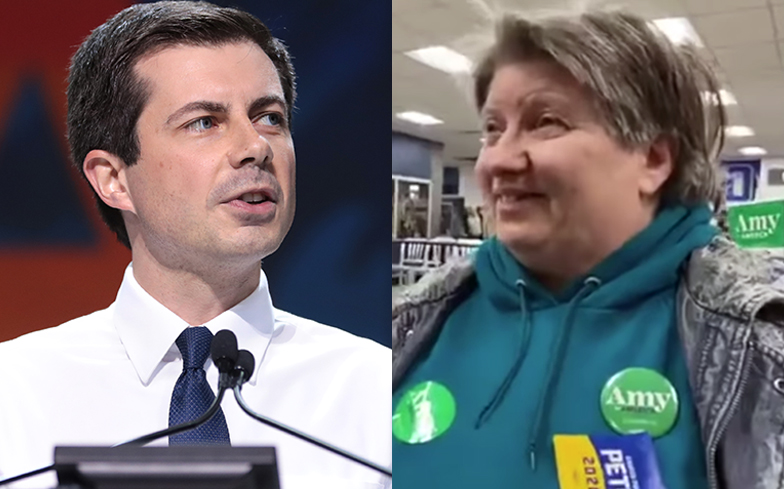 “I don’t want anybody like that in the White House.”

A woman who initially voted for Pete Buttigieg in the Iowa caucus asked to change her vote after learning that the presidential hopeful is gay.

Buttigieg, a former mayor of South Bend, came out to the public in 2015 and married his partner Chasten three years later. His sexuality has become a major talking point, as he’s the first openly gay Democratic candidate to run for president.

But this unnamed supporter seemed to miss the memo, as footage shared to social media shows her shocked reaction after discovering Buttigieg is married to another man, even asking for her voting card back.

“Are you saying he has a same-sex partner?” the woman asks a polling station representative. “Are you kidding me? I don’t want anybody like that in the White House. So can I have my card back?”

Staff member Nikki van den Heever says she’s unsure whether the vote can be rescinded as it’s been signed and submitted, but asks the woman to reconsider, saying: “He’s a human being, just like you and me, and it shouldn’t really matter.”

The anonymous voter asks, “How come this has never been brought out before?” to which Heever replies, “It’s common knowledge.”

Attempting to change her mind, Heever says: “I guess what I would like you to do is just think deep inside, should it matter if it’s a woman or a man, or if they’re heterosexual or homosexual, if you believe in what they say? That’s my question.”

“It all just went right down the toilet, that’s where it went,” replies the voter, adding: “You must not believe [the Bible] then if you think it’s okay for somebody to marry a same-sex person.”

The video ends with Heever – who remains remarkably calm throughout – explaining that she’s a Christian too, but that her God “wants me to love everybody” regardless of their sexual orientation.

“What I teach my son is that love is love and we’re all human beings,” she adds.

Watch the moment here or below.