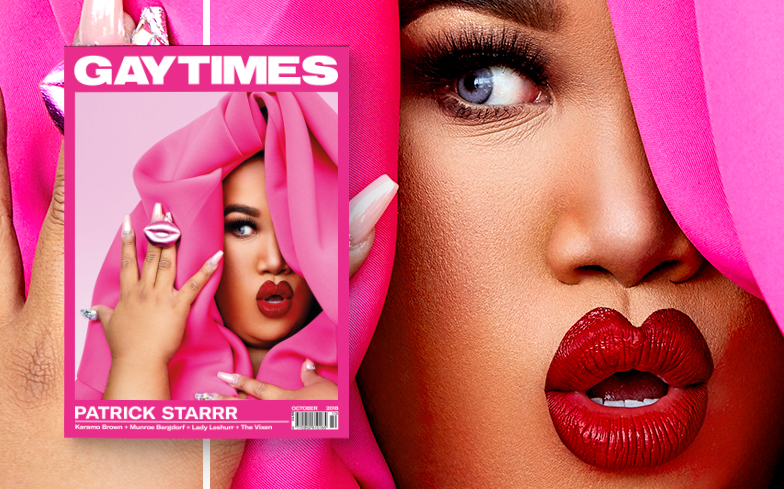 Patrick Starrr has opened up about his journey to becoming one of the world’s most successful male makeup artists.

With over four million adoring subscribers on YouTube, and a host of A-list fans including Katy Perry, Paris Hilton and Tyra Banks, this trailblazing YouTube star is leading the revolution of men embracing the transformative power of makeup.

But while the beauty world has accepted male makeup artists with open arms, the gay community still struggles with its own barriers of internalised homophobia and femme-shaming, and though Patrick may (for the most part) have escaped the first-hand effects of this prejudice, it’s still a concern for him – especially when it comes to looking for a relationship.

“I wouldn’t say that I’ve experienced it personally, but I do know that it’s out there, and that’s definitely one of my insecurities about being someone in makeup,” he tells Gay Times as he covers our October issue.

“But I don’t wake up with lashes and contour, looking plastic, y’know? I’m a man at the end of the day, and I want love and I want a husband. But I feel like there is discrimination, and it’s a little disheartening for a community within the community to have that divide.”

He continues: “Us men in makeup who wear a full face, we’re not requiring men to step out in the same way, but I think it’s just a movement to say it’s OK for men to wear a little bit of makeup, and to take care of themselves and look presentable. There’s nothing wrong with that.” Having such a prominent platform gives Patrick an enormous sense of responsibility in spreading love and positivity among his followers – and it’s one he doesn’t take lightly – but it’s also given him the chance to work with some of the biggest names in the world, including the Kardashians.

“Kim was just beyond compare, and for her mother, I just slid into her DMs like, ‘Hey Kris, do you wanna do a video?’ and she was like, ‘Let me ask Kylie… sure, Kylie loves that idea!’ I was like, ‘Holy shit, this is crazy!’ I had so much fun with Kris, and for me to have two of the Kardashians on my channel is incredible,” he laughs.

“Katy was so sweet too, and I even got to do her makeup again after that experience, and with Tyra I got to be on America’s Next Top Model after that. So for me to create those amazing relationships, and for them to trust a mere mortal like me, it says a lot.

“When Tyra asked me to be on her show, America’s Next Top Model, I was shook. That was just amazing.”

Elsewhere in our cover interview, Patrick opens up about the hate he receives online for being a man in makeup, the importance of using his platform to spread positivity, and his dreams of launching his own range of cosmetics.