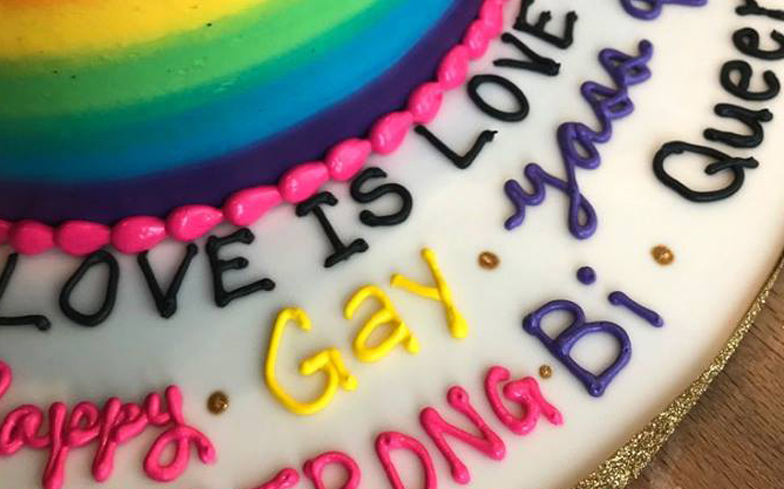 With the US Supreme Court poised to decide on the long-running lawsuit involving a gay wedding cake and a bakery’s refusal to make it based on religious beliefs, over in Canada things are looking much more colourful.

Creative director Chris Farias wanted to get his fiancé Jared a cake to celebrate one of year of engagement, but he didn’t want any old creation.

In fact, Chris specifically asked for “the GAYEST cake they could make” when he called up the Cake and Loaf Bakery.

“Without hesitation, and with much excitement, they said ‘We’ll do it!!!'” Chris said.

And boy did they deliver. Not only was the cake created with rainbow layers, but it was also covered with brightly-coloured swirls, words like ‘gay’, ‘queer’, ‘strong’ and ‘love is love’, and to top it all off, a giant golden unicorn horn.

“This is what I got. I am in tears right now I’m so happy,” Chris wrote on Facebook.

“Being part of the LGBTQ+ community isn’t easy for many. And that’s an huge understatement. But I am proud of who I am, and how far WE have come.

“I am proud to be a gay Canadian who can order a cake and not get turned down because of who I love. I love this country, and I love my community.”

He added: “If you believe that #LoveIsLove, please share, and show our neighbours to the south that we support them. That we empathise with their struggles. That Canada is loud and proud and will make them any cake their heart desires.”

The baker who created the cake, Quinn Pallister, revealed that she has two mothers.

“I never got to make them a wedding cake, so this was like making something for everybody that’s part of the community,” she told BuzzFeed.

Cake and Loaf Bakery owner Nicole Miller added that she made a gay wedding cake a few years back for a couple who had been refused elsewhere.

“We really want to embody a positive, all-inclusive safe space for all of our employees and customers,” she said.