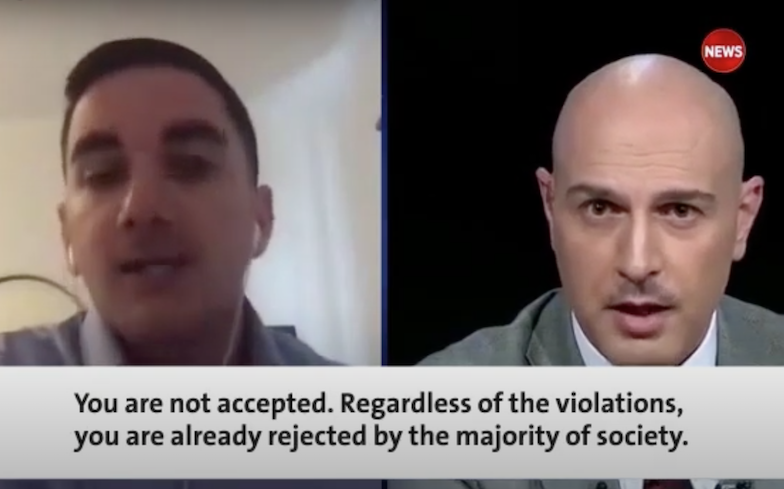 Al Sharqiya TV, a national television channel in Iraq, have removed an interview highlighting the disproportionate amount of violence against LGBTQ+ people in the country.

It was broadcast live on Friday (22 May) but was deleted from the channel’s online platforms shortly after.

In the interview, activist Amir Ashour demands justice for the deaths of LGBTQ+ Iraqis, only to be told by the host that queer people are “rejected by society” and are therefore “the ones who need to be punished and held accountable.”

After reminding him that religion states that “all human life is sacred and that it needs to be preserved and protected” and that Iraq are obliged to protect its LGBTQ+ citizens, the interview came to an abrupt finish.

Amir, who is the founder and executive director of Iraq’s first LGBTQ+ charity IraQueer, said its disappearance from online platforms is evidence of Iraqi politicians “violating” and overlooking crimes committed against the community.

“They are also actively trying to silence us and stop the public from hearing our side of the story,” he said.

“This fight is far from over. LGBTQ+ Iraqis have been receiving an increased amount of threats since 17 May. We have even documented six killings of people who are or perceived to be LGBTQ+.”

Amir says government representatives and those with political connections need to “pressure” Iraq into publicly supporting and acknowledging the “importance of the right to life for all citizens including LGBTQ+ people.”

He also says funders need to “keep in mind that while combating COVID19 is an immediate threat facing the world including LGBTQ+ people, the threat against LGBTQ+ Iraqis did not start with COVID19, and will not end when we have a vaccine.”

He continued: “If you work at a media organization, please reach out. We want to make as much noise as possible about Iraqi media’s attacks on LGBT+ citizens, and oppression of LGBT+ voices in the rare occasions they host us.

“Iraqi media must be held accountable for their role in promoting anti-LGBT+ discrimination.”

Amir has since uploaded the entire interview in full on IraQueer’s YouTube page, which you can view here or below.

IraQueer celebrated its fifth anniversary earlier this year. The charity has transformed from an online platform to a registered human rights organisation that’s recognised internationally and relied upon by thousands of LGBTQ+ people in Iraq.

Over the last five years, they’ve trained more than 100 activists, social workers and journalists to help the cause, and spoke on some of the biggest world stages including the UN’s Human Rights Council, the General Assembly and One Young World.

The work of IraQueer has reached one million people online and offline, and the organisation has met with world leaders, raised awareness about LGBTQ identities in Iraq, campaigned on the streets of Bagdad, and lobbied decision makers.

If you would like to support the vital work IraQueer do, you can donate here.

In a mission and movement that reflects GAY TIMES’ activism and vital community roots, Amplifund supports micro and small media and activist based organisations around the world, who provide vital sources of information to LGBTQ people facing prejudice, persecution and discrimination from government, the mainstream media and society.