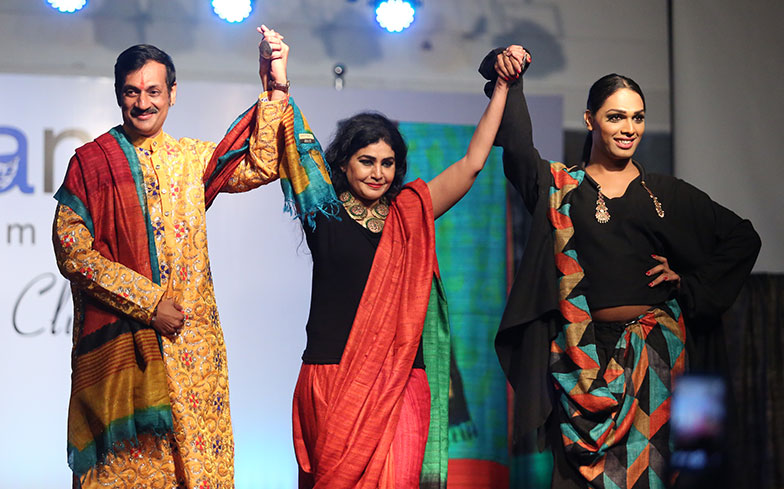 When Manvendra Singh Gohil came out to the world in 2006, he made history by becoming the first and only openly gay royal in India. While his journey since has seen him meet with world leaders, establish HIV prevention charity Lakshya Trust, and land appearances on The Oprah Show – not once, but three times – and Keeping Up With The Kardashians, things weren’t always rainbow-coloured for the Prince of Rajpipla.

For most queer people, puberty is a confusing time. Whether you’re becoming aware of your same-sex attraction, your body’s undergoing transformations that don’t align with your gender identity, or you just don’t fit in with the people around you, it’s a moment in life when education and positive role models are needed most. Complement that confusion with a complete lack of exposure to the outside world – as is the case for a member of a royal family – and the chances are you won’t even know how to describe the way you feel.

“I knew I was different from the age of 13,” Manvendra recalls. “I had a lot of girlfriends in school, but I sympathised with them rather than having an attraction towards them – I didn’t like the way boys used to treat them and tease them. So in that way I was different. But I didn’t know until I was around 28 years old that this kind of behaviour is called being gay.

“Growing up in a royal family is different from other families. It’s a very protected, regulated and conservative lifestyle. I was raised by a nanny, so there was very little communication between me and my parents. Our relationship was very formal. There are certain etiquettes like when to smile, when not to smile, and how to behave in public. It’s quite similar to the way the British royal family works.”

With a culture that promotes honour and tradition among the family name, it didn’t take long for him to be offered the chance to enter an arranged marriage and provide an heir to his throne. Unsurprisingly, the marriage – to a princess of Jhabua State in Madhya Pradesh – was a failure, and they divorced little more than a year after they wed, although Manvendra stresses that entering the marriage was entirely his own choice to make.

“Most gay men and women in India are forced into marriage by their parents, but I wasn’t forced because I wasn’t even aware of my own sexuality,” he explains. “So I got married, and of course it wasn’t a love marriage it was an arranged marriage, but it was my choice to get married to a woman. Of course the marriage didn’t last for long – 15 months to be exact – and it ended with divorce due to non-consummation of marriage, which means we didn’t have sexual intercourse. That’s a very valid reason for divorce in India.”

Following a nervous breakdown (and resulting hospitalisation) which stemmed from living in the closet for 37 years, Manvendra was outed to his parents by his psychiatrist in 2002.

“Their initial reaction was that of denial,” he says. “In their minds, they had taken all the steps to groom me as was expected from a member of the royal family. They also knew I had a lot of girlfriends in school, so they didn’t understand how I could be gay. When they tried to accept the situation, they thought it was a disease or a mental disorder and I should be cured of it using electric shock therapy. I was taken to religious leaders for them to advise me to change my behaviour or to become straight.”

Of course, the conversion ‘therapy’ pushed onto him by his parents was unsuccessful, and their negative response to his sexuality only encouraged him to be himself even more. After four years of financial disempowerment and blackmail from his parents, who threatened to out him to his extended family and friends if he didn’t find a wife, Manvendra came out to the world during a press interview in 2006.

“I was told if I was not going to get married then I was to become a saint and renounce the world, or become transgender,” he explains. “You can’t live in this society as a single male, you have to get married, even if you’re gay. Because for my family, being gay was something that could be converted into being straight. They didn’t see it as an orientation, they saw it as a behaviour.

“There was also a lot of pressure to get married from the people in my kingdom, who wanted to see the next heir to the throne. A lot of people in my friendship circles, those who were straight and supported me, used to say, ‘If you really want the gay movement to be strong in India, then somebody needs to be a sacrifice’. So they were indirectly trying to hint that I should come out.”

Within three months of coming out to the world, Manvendra’s parents had publicly disowned and disinherited him. In his home state of Rajpipla, effigies of the prince were burned and his people called for him to be ostracised. At one point, he even feared for his life.

“I may be the first member of the royal family to come out publicly, but I’m certainly not the only one,” he says. “I hinted that there were other people who I knew were gay but in the closet, so they were feeling scared, and they were the ones who instigated my parents to disown me. They were trying to shut my mouth. There was a chance I could have been killed, because in royal families especially – and this is around the world, not just in India – it is very easy to kill somebody.”

While homosexuality was decriminalised in India back in 2009, that ruling was overturned in 2013 by the country’s Supreme Court. The colonial-era law known as Section 377, which outlaws sex that doesn’t result in procreation, is a direct result of Britain’s rule of India which ended in 1947. Manvendra believes that the UK has a “huge responsibility” to encourage progressive laws and attitudes in countries they once dominated.

Since his family and people disowned him, Manvendra has forged his own path and found himself promoting awareness of the situation in India around the world, discussing LGBTQ rights with politicians and appearing on popular TV shows. Earlier this year, he opened up his pink palace to homeless LGBTQ people who were also cast out by their family, and he continues to raise money to help people with HIV and AIDS. His success has even put him back in contact with most of his family.

“I have reached a compromise with everyone except my mother. She still believes that one day she’ll manage to convert me and that I’ll get married, so we don’t communicate at all,” he explains. “On the contrary, now that I’ve been on The Oprah Show three times, I’ve become very popular with the rest of the royal family. If you achieve something or you become successful in life, those same people who shunned you want to connect with you because they see value in you.”

And meeting Oprah? It’s one of his favourite memories. “She told me that she has interviewed so many people but she found me to be the most honest and truthful person she has ever met,” he recalls. “That is the biggest compliment I have ever received in my life.”

You can find out more about LGBTQ and HIV/AIDS awareness charity Lakshya Trust here.