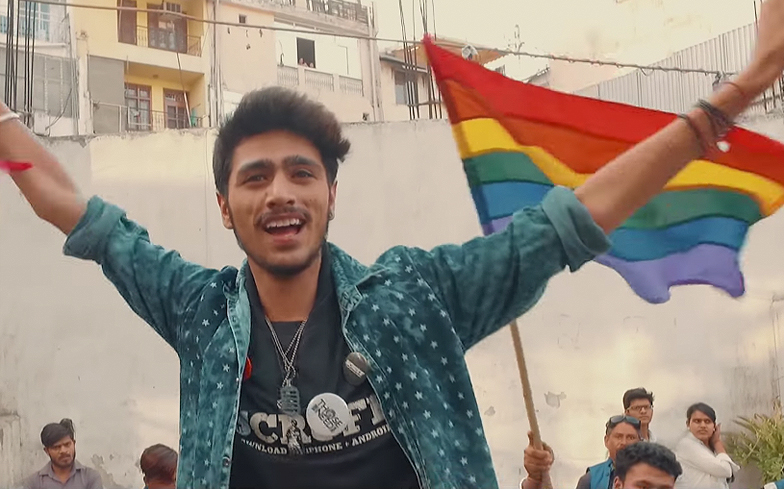 Gay rights activists and supporters came out in force this past weekend in New Delhi, to mark the 10th annual Pride parade in the city.

Homosexual acts remain punishable by up to ten years in prison in India, but those marching on Sunday were hopeful the law would change soon.

Hundreds took to the streets in colourful outfits, chanting in defiance of the country’s anti-LGBT laws.

“I don’t understand why they criminalized love,” Tish Anand told ABC News at the parade. “Duh. They are jerks.”

New Delhi Pride organiser, Manak Matiyani, admitted that his education and wealth meant that he has been allowed to live as a gay man in India, but it’s not that easy for those less fortunate.

“We’re fighting for the right of everybody in this country to live as an equal citizen, which means that everybody should be able to live their life the way they want to,” he said.

Matiyani added that the anti-LGBT law is often used by the police and members of the public to threaten and extort money out of those living in fear of being openly gay.

Ahead of the weekend, organiser Alexander Fernandes said he hoped the event will help change attitudes towards LGBT+ people in the region where it is estimated 80% of the LGBT+ community is still in the closet.

“It is happening for the first time in Goa. We want to create awareness about the rights of the LGBT community,” Fernandes told the Indian Express.

“There are several wrong notions about the community, which need to be addressed through this event.”

Meanwhile, India is currently deciding whether to go forward with a new proposed plan for a Uniform Civil Code.

The idea is to bring together the country’s many different religious groups and create a common public law for them all to follow.

The Uniform Civil Code would affect laws around marriage, divorce, inheritance and parenting, and would be a massive overhaul for India’s legal system.

India’s Law Commission asked a group of citizens to research and put together a draft for the proposed code last year.

They have now come to state that current laws are “not always equitable and fair and do discriminate on the grounds of sex, gender and sexuality”.

To rectify this issue, they have proposed with this new civil code that citizens should have “equal rights in marriage, divorce, child custody, guardianship, inheritance and succession… irrespective of their gender, sex and sexuality, religious or cultural traditions or beliefs”.

If it’s successful, it could see the country legalise same-sex marriages.

Hopefully, this is also a step in the right direction for India to re-decriminalise same-sex activities as they did in 2009, but it was revoked in 2013 with 95% of people supporting the decriminalisation of same-sex relations.

Related: Almost 14% of those arrested under India’s anti-gay law last year were minors