We live in a period of intense change, which is why Pride still matters 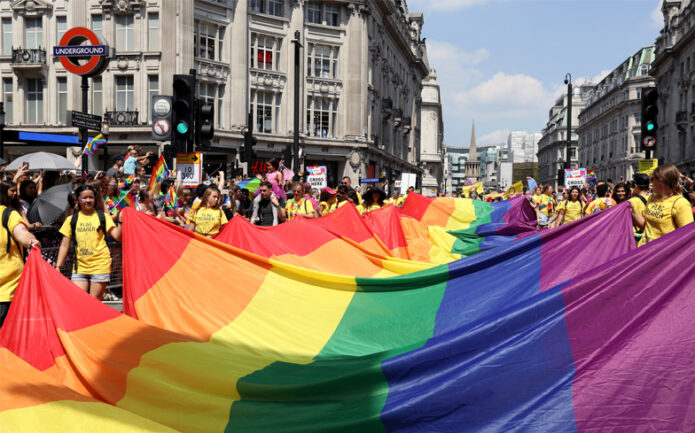 2012. What a year. The London Olympics (Yaaaas Tom Daley). The Queen’s Diamond Jubilee (Yaaas Queen). I was still in the closet (Yaa…oh).

After the regular dosage of experimentation, courage and an amazing set of friends things changed for me – and it was in 2015 that everything went into overdrive. I remember reading an article in BuzzFeed called ‘Meet the Gay Muslims Living in Straight Marriages’ and feeling a sense of outrage that only someone in their mid-to-late 20s can feel. For me it was irresponsible journalism that didn’t offer a route out for so many who were like me.

That feeling was made a thousand times worse after reading only negative stories about gay Muslims or Asians in the media. There was Shrien Dewani who allegedly killed his wife due to his sexuality and Nazim Mahmood who committed suicide after coming out to his family. It felt like ‘people like me’ were either destined for sham marriages, prison or the grave.

Fast forward a few years and it’s hard to believe then, that aged 30, I would now call myself Director of Communications for Pride in London. Given that I struggled to say the words ‘I’m a gay Muslim and I am proud’, how I am able to carry this off is not something I take lightly. It’s part internalised shame, part imposter syndrome and part #millennialproblems.

Paying for portaloos.
What I find hardest about the title is that it can sometimes feel make-believe. Like almost all people who ‘work’ for Pride in London, I am a volunteer. We fit this in in our spare time – busy beavering away on e-mails, WhatsApp groups, Slack channels and Trello boards. We take part in order to do things our day jobs would never allow, to make a change in the world and importantly, to meet like minded people. In 2016, when I was struggling to make sense of things I found a community in Pride in London I never knew existed. It’s a group that helps in ways that often go untold, which is sacrilege for a communications director to write. When I started the ‘Big Gay Iftar’ – an event to bring together the LGBTQ and Muslim communities to open fast together following the tragic shootings in Orlando – we ran into a problem: money. We needed to pay for ingredients. The cooking was all done out of the kindness of Asma Khan from Darjeeling Express’ heart, but we needed a small amount of cash.

Pride in London stepped in and without that donation the Big Gay Iftar would never have seen the light of day. For all the cries of corporatisation it faces, the money Pride in London raises from fundraising and brand partners is put to good use. It goes towards ensuring the event is free for all who want to come and watch, to helping with community events during the now-month-long Pride Festival or unglamorous things like the portaloos that line the side streets of Regent Street during the parade (talk about pissing it away)…

So what does Pride mean?
It’s unquestionable that the LGBTQ community is bigger than Pride in London. And it’s a divided one given it encapsulates four letters and a broad ‘+’ at the end. In my opinion, it is a shame to see fractions appear within a group that is just 2% of the general population. One of my first tasks after joining the board was managing our response following claims that Pride in London lacked diversity. A point was being made, but I felt a sense of absurdity, irony and despair that I put down to a lack of sleep, a busy day job and what I now term my ‘gay job’.

I have come to see that this is something all organisations are struggling with – how do they really reflect British society today? This is a bigger issue about structural problems within UK society. Islam has taught me that we are all flawed – it’s about how we make changes and have the right intention in the things we do.

Shortly afterwards we launched a survey called a ‘Matter of Pride.’ We went out and asked people, “What does Pride mean to you?” We asked straight people by running the survey on YouGov’s national omnibus. We also asked it in debates with Peter Tatchell, through social media, to the cast of Queer Eye (no, I cannot believe!). The question was also answered by over 2,000 LGBTQ people after we put a call out through our social media channels, which have a phenomenal reach. While the overwhelming majority (78%) told us Pride means a celebration, an element of protest (24%) remains. When we break down the data through the lens of minority groups such as asexuals, polysexuals, bisexuals and those who are black, asian or from other ethnicities, we see more of a skew towards activism over party. It makes sense given how much more marginalised communities have to fight for acceptance not just externally, but within.

Does Pride Matter?
That’s probably why for me, Pride is about activism. As a native Londoner I grew up in a suburb that so many of my straight friends and colleagues now long for. I remember sneaking into town on the Metropolitan line and watching the throngs of people at Pride marching through the streets in defiance. I remember, aged 18, parking my red Ford Fiesta outside the Astoria – all so my friends could go clubbing at the Ghetto (little did I protest). This city, for me, shouts defiance, not least because we have a Muslim Mayor leading the parade once again.

We are now seeing many organisations turning their attention to Prides around the country and rightly so. With Brexit looming, we all have a responsibility to burst our filter bubbles. We have a fascinating dataset as a result of our survey and if any data analysts out there want to help analyse the difference in the views and experiences for LGBTQ people in and out of London then I want to hear from you.

It isn’t all about Pride in London (again, sacrilege for me to say) and unless we undergo a stark rebrand, our primary mandate remains to shape how we celebrate and protest being LGBTQ for all colours and creeds in the capital city. With our ‘Pride Matters’ report we’ve surfaced the views of the community and we’re comparing them to the mainstream. What we see is that we may have rights, there is still a long way to go for true equality – especially for minorities within our already small minority.

The fact is, we live in a period of intense change. We must remain defiant and continue to challenge views. However, let’s remember to take some time, even if it’s just five minutes, to take stock of how far we’ve come both as a collective and as individuals. That’s what I’ll be doing this Pride season.