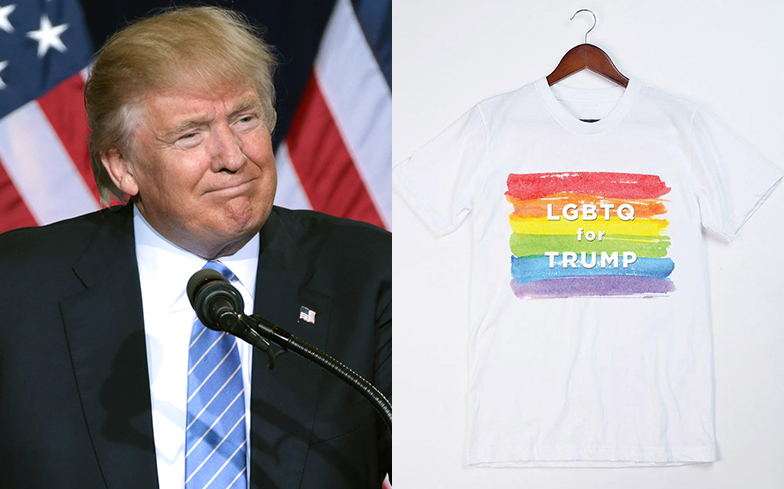 This might be the most ridiculous Pride merchandise we’ve ever seen.

Donald Trump, whose cabinet has a terrible record on LGBTQ rights (including banning trans people from serving in the military), has launched a new ‘LGBTQ for Trump’ t-shirt just in time for Pride Month on his official online store.

“Show your pride and your support for Trump with this exclusive equality tee,” reads the t-shirt’s description, which also promises that it was “proudly made in the US” and is sold alongside Make America Great Again hats and clothing.

Unsurprisingly, there’s no sign that any profits will go to LGBTQ charities, but if for some bizarre reason you still want to purchase one of these monstrosities, they’re currently reduced to $24 from $30 (we won’t be linking to Trump’s store here).

LGBTQ charity GLAAD have denounced the sales of the t-shirts, calling on the President of the United States to instead publicly recognise June as Pride Month – which he’s never done – and stop attacking the very community he’s trying to cash in on.

“The Trump Administration is trying to pull yet another con job on LGBTQ Americans, but like their other desperate ploys, this idea will fall flat,” said GLAAD Chief Programs Officer Zeke Stokes.

“Trump should hold the sales pitch and try issuing a statement honouring June as National Pride Month and the countless of LGBTQ Americans who fought tooth and nail for the level of acceptance our nation sees today.”

If you’re still not convinced that the t-shirts are a bad idea, GLAAD have currently counted 108 attacks against the LGBTQ community from Trump’s administration – you can read all about them in the charity’s Trump Accountability Project.