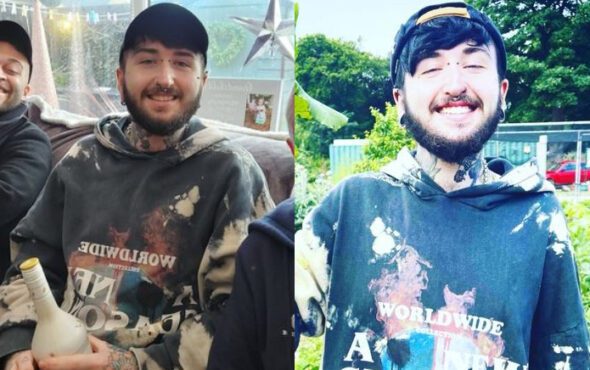 A gay man was hospitalised after he experienced a violent homophobic attack in Manchester.

In the early hours of 10 April, Morgan Fevre was on his way home after a night out with friends.

While walking on Charlotte Street, the 22-year-old was approached by an unidentified man – who was asking for a cigarette. The individual then proceeded to spew insults about his jacket and sexuality before he physically assaulted him.

The horrific attack left Morgan with a bleed on the brain, three broken teeth, and a fractured cheekbone and eye socket. He has since undergone surgery for his injuries, including a life-saving craniotomy.

In an interview with the Evening Standard, Morgan’s father, Paul Fevre, gave further insight into the aftermath of his son’s attack.

“We saw Morgan laid there it was absolutely heartbreaking – tubes everywhere, wires everywhere. And then when Morgan saw us, he started crying,” he revealed.

“The first thing he did is say, ‘I’ve obviously done something wrong for this to happen,’ instantly blaming himself and apologising that we had to come drive to Manchester and things like that.

“And that’s probably what hurts the most, in all fairness, that the first thing that ran through his mind is he deserved those kinds of injuries.”

In an additional interview with Manchester Evening News, Fevre revealed that Morgan initially moved to the area due to its LGBTQ+ inclusivity.

“Morgan has gone to Manchester thinking it’s great – you can come out and be who you are. Then this happens. This has knocked him back, but we are all here for him,” he said.

“Without a shadow of a doubt, one of the reasons he came to Manchester was because of the city’s inclusiveness.”

“In a country of progression and in a city which has somewhere called the Gay Village, that this can happen and these words said, is baffling and upsetting,” he told Manchester Evening News.

“Morgan is doing well, but this will leave lasting scars both physically and mentally. He is on the way to recovery, but has only just become himself in the last couple of days.”

Since the incident occurred, Manchester authorities have ruled the attack as an anti-LGBTQ+ assault.

“It is believed the male victim was punched by another man and required hospital treatment for face and head injuries,” the Greater Manchester Police said in a statement.

“The incident is being treated as a homophobically aggravated assault and is being investigated by GMP’s City of Manchester Criminal Investigation Department.”

Alongside Morgan’s recovery, his family has created a GoFundMe account to help with his expenses while he works through his PTSD.

“Morgan is 22 years old and is a support worker for adults with learning difficulties. Due to possible volatile situations, he won’t be able to return to work,” his father wrote. “Money won’t change this but will help him manage with expenses as he gets back to some sort of normality.”