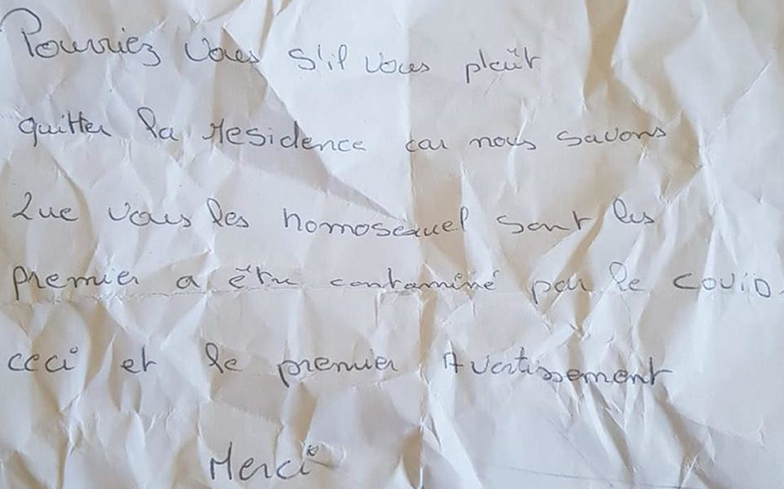 “This is the first warning.”

A gay couple living in a quiet neighbourhood in Marseilles – which is on lockdown due to the coronavirus pandemic – have received a threatening letter asking them to leave their apartment building.

David, a 33-year-old caregiver, shared the note in a post on Facebook after his partner, an UberEats delivery man, found it attached to the windshield of his car on Thursday 26 March.

“Could you please leave the residence because we know that you homosexuals are the first to be contaminated by COVID-19,” the note read. “This is the first warning. Thank you.”

David told TÊTU he believes the letter was from a neighbour living in their building, who had previously filed a complaint against Muslim neighbours who had just married and played “oriental music”.

“I think he is a person without intelligence and education. I think this person is certainly religious and that he truly believes in what he says,” David said. “To mark bullshit like that, you have to believe it.”

The two men say they went to their local police station to report the letter, but were told it was “not a threat but a warning” and were encouraged to file a police complaint, which would have no repercussions.

David shared the story to Facebook, where he received a “wave of support” and was eventually contacted by the LGBT team from Bordeaux Police, who said they would try to recover DNA or analyse the writing on the letter.

But David says he is feeling more vulnerable as a result of the letter.

“I look a little more behind me,” he explained. “My spouse has a strong character, he is rather hot-headed. I’m pretty calm. I wonder what it will be next time. Are they going to smash my car? Are they going to wait for me downstairs?”

He added: “I can understand that, psychologically, it is hard to be locked up at home, I think there are some who ‘crack’ a little, the bullshit comes out.

“Personally, I did not expect to receive a word like that about my sexuality. I had never faced homophobia in my life, I had never had the slightest thought.”

The story comes as some bigoted, conservative preachers around the world have blamed the coronavirus pandemic on the LGBTQ community and same-sex marriage.