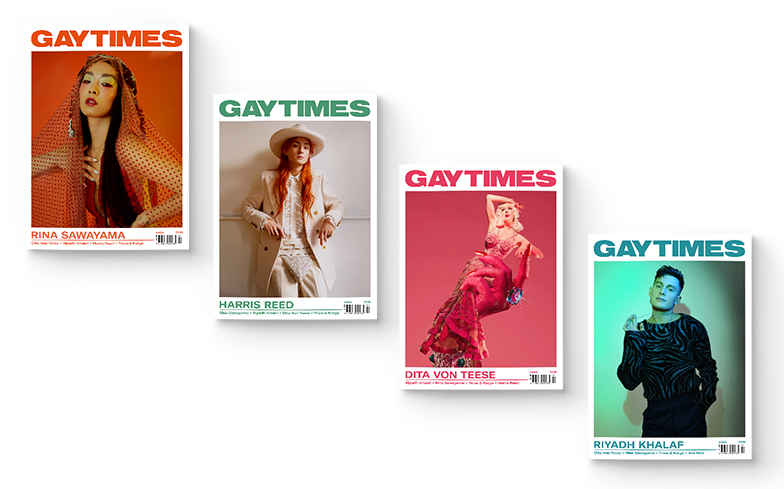 Say hello to our superb line-up of emerging LGBTQ talent and a long-standing ally and icon for the covers of Gay Times Magazine Issue 494.

Our final instalment is titled Vibrance, which sees our covers louder and brighter than ever before. The future of pop? You’re looking at her. Rina Sawayama is changing the music industry with her individual, unapologetic and unique approach to songwriting.

When she isn’t writing certified bangerz or posing for some of the most prominent fashion houses in the world, the Japanese-British pop icon is raising awareness on LGBTQ and gender politics. This pansexual princess should definitely be on your radar. Starting his career behind the lens of YouTube, Riyadh Khalaf has developed into a fierce broadcaster, film maker and now author with an impressive following.

His new book was written as a substitute for what he himself wishes he had when contemplating coming out as a teenager. With heartwarming stories from his family and celebrity contributions from the likes of Stephen Fry and Courtney Act, the book is a how-to-guide for LGBTQ youth embarking on their coming out journey. Harris Reed is the gender fluid designer you need to stan. With an impressive arsenal of celebrity models including Harry Styles, Ezra Miller, Troye Sivan and Solange, Harris’ pieces serve not only as artistic expression, but as pivotal moments that spark conversation on the relationship between gender and fashion.

In issue 494, Harris pens their Fluid Manifesto: an exploration into societal progression, representation in the LGBTQ community and the responsibility that fashion and the arts have to educate and inform the wider population. LGBTQ people have always idolised strong, independent women and when it comes to Dita Von Teese, there’s no doubting her status as a living legend. A staunch ally of the queer community, the burlesque performer has toured the world spreading her message of empowerment and sex positivity. In our latest issue, Dita speaks on the #MeToo movement, living without labels and how baffling it is that homophobia is still running rampant even within her own industry.

You can get your hands on Issue 494 first by ordering through the GAY TIMES store here. For the best deal, check out our subscription packages here.

Our new issue – which is packed full of even more queer brilliance on the inside – will be available in stores on 29 March.