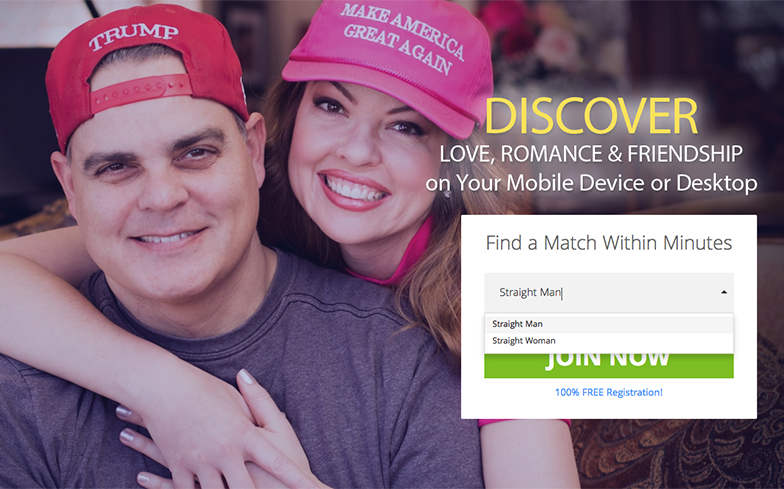 Trump.dating – which is owned by Friends Worldwide Inc. – takes a leaf out of the President of the United State’s book as it promises to “make dating great again” and create a safe place for Trump supporters to meet each other.

“While searching for a potential partner on other dating sites, it’s not uncommon to see messages like No Trump Supporters or Proud Liberal,” the website says.

“We’re wrecking the dating game and giving like-minded Americans a chance to meet without the awkwardness that comes with the first conversation about politics.

“Wouldn’t it be refreshing to already know that your date roots for the same team?”

But curious users have found that a dropdown box asking about their identity provides them with only two answers: “Straight man” or “Straight woman”, with no option for gay, bisexual or other identities.

There is a website called https://t.co/W3oGk7I9zc, and you have to be straight to use it: pic.twitter.com/hZGiZihHYE

While the website is not affiliated with Trump, nor has he acknowledged its existence, social media users have expressed their outrage at the decision to exclude gay and bisexual people from signing up – although we can’t imagine many would want to.

Is this the poster for the new Purge movie? https://t.co/BN8OOEmvVI

https://t.co/5vSKGZXmZX: “when you’re straight & full of hate, but want to find love” pic.twitter.com/WZmF1DXWI8

Why would anyone call a dating site "Trump Dating" when "OK Stupid" was right there for the taking? https://t.co/3M2IrsUqiB

One user pointed out the hypocrisy of the website excluding gay and bisexual people, but allowing ‘unhappily married’ people to sign up, suggesting support for infidelity – although when we checked this option had been removed.

They let you join if you are happily married, just like the man himself! pic.twitter.com/NlhYRCIBql

Others took to mocking the website’s logo, which features a recreation of Trump’s infamous ‘hair’.

I love the wig on the logo. pic.twitter.com/3GHeWtr6m8