An empty bus has just entered the Brighton Pride parade, and here’s why 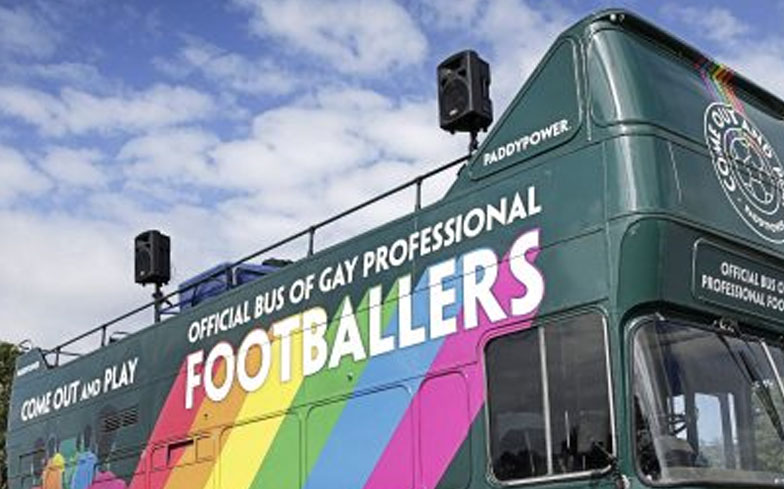 “This stunt intends to highlight the ‘statistical anomaly’ that none of the 500 or so players registered in the Premier League is openly gay.”

Brighton Pride celebrations kicked off with an absolute bang today, playing host to over – wait for it – 300,000 people.

Due to the appearance of megastar Britney Spears later on this evening, this year’s festival has become the most hyped and anticipated in its history, and has featured some of the most sickening floats ever.

However, the bus from Paddy Power – which is one of the most flamboyant and proud buses today – has captured the most attention of Pride-goers due to the fact that it’s, well, empty.

Designed by Officer and Gentleman, the float is aiming to highlight the lack of LGBTQ representation in football and across all UK sports.

While there are out-and-proud sports stars in the industry – such as Tom Daley, Gareth Thomas and Nicole Adams – it’s a rarity across sport (especially Premiere League football – to which there are no out players) to come out as part of the LGBTQ community. Isn’t it curious that out of the hundreds of footballers in the Premiere League and Championship, not a single one of them is openly gay?

A spokesperson for Paddy Power told us: “We’ve been working on this campaign with the Madrid-based Officer and Gentleman agency for several months. The bus is the centrepiece of our campaign – an (empty) open-top tour celebrating gay Premier League players during an otherwise-raucous Pride parade should catch people’s attention.

“But an empty bus that’s fully equipped with flamboyant props and loud music is even more striking. Like a birthday party with a cake and decorations that no one shows up to, it’s at once both sad and thought-provoking. Which is just the message we’re trying to get across.

“This stunt intends to highlight the ‘statistical anomaly’ that none of the 500 or so players registered in the Premier League is openly gay. We think an out gay Premier League footballer would have an extraordinary effect not just on the LGBTQ community, but society in general. They would spearhead profound change and, club colours aside, that’s something we support more than anything else.”

In 1990, Justin Fashanu became the first professional footballer to come out as gay. Eight years later, he committed suicide after being accused of sexual assault, fearing he would not get a fair trial because of his homosexuality.

Paddy Power wants to encourage our national heroes to come out and become queer role models, not just for themselves, but for the millions of LGBTQ fans and athletes worldwide that need a role model.

The empty bus follows their series of posters seen over the last 24 hours with similar statements of encouragement.