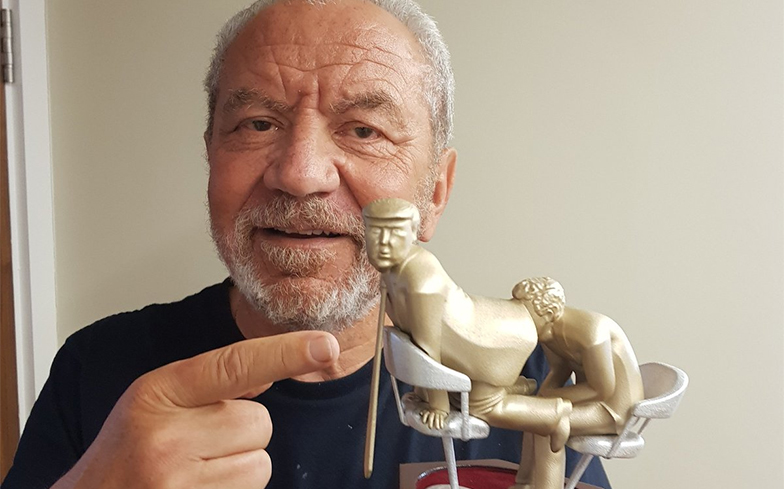 Piers Morgan won’t be happy about this…

Earlier this year, the Good Morning Britain host and professional controversy-courter hit out at the BBC for airing a cartoon of him performing anilingus with US President Donald Trump on satirical news show The Mash Report.

“The BBC thinks this is OK to broadcast. But if it depicted high profile women, there would be outrage. Why the double standard?” he ranted, before adding that he believed the drawing was ‘homophobic’.

While many agreed that the concept of laughing at two men engaging in sexual relations could be interpreted as homophobic, one person who couldn’t get enough of the cartoon was Lord Alan Sugar.

In fact, the businessman and Apprentice host loved the image so much that he decided to get it turned into a golden paperweight.

“This paper weight will take pole position on my desk,” he tweeted.

This paper wieght will take pole position on my desk. pic.twitter.com/9TpQgWYTGP

A closer look at my paper weight pic.twitter.com/zZLvXX0aZx

During an interview with Huffington Post, comedian Rachel Parris, who fronted the segment and used the cartoon on The Mash Report, gave the perfect response to Piers’ accusations of discrimination.

“And if there was a strange feeling about those two women, if they enjoyed the same position of immense social and financial privilege that those two men do, then yes I think we would have drawn the cartoon.

“Personally, I’d be very happy to be seen in the same position. Say if I interviewed Oprah Winfrey, I would definitely kiss her ass. Feel free to draw that, that’s fine.”