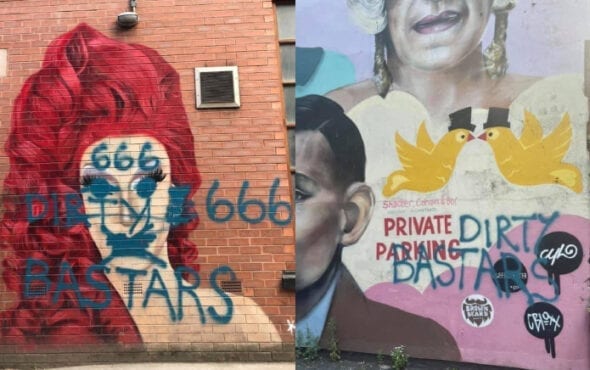 A man has been arrested in connection with the recent defacing of two murals in Manchester’s Gay Village.

According to a report from the BBC, the man has since been bailed out and is currently pending further questioning.

At the end of June, a mural of Drag Race UK star Divina de Campo was targeted, as well as one with World War II code breaker Alan Turning and drag legend Foo Foo Lammar.

The taggers wrote “666” and “dirty bastards” on the acclaimed pieces of artwork.

Chief inspector Adam Wignall touched on the arrest and hate crimes in a statement.

“We take crimes of this nature very seriously. People should be able to go about their daily lives free from hate and abuse,” he said.

“This type of behaviour will absolutely not be tolerated in our communities. This is believed to be an isolated incident with no wider threat to the community.”

In an interview with Manchester Evening News, Divina opened up the situation and stated that she didn’t take the vandalism to heart.

“Of course when I first heard it happened, I felt some kind of way but is it an attack on me personally? No, it’s not,” she said.

“It’s bigger and more important than that. They don’t know who I am so it’s not an attack on me personally, but it is an attack on LGBT+ people.

“For me, it just re-energises that argument for why there is still a need for Pride. People will often go on about how we don’t need Pride anymore or ask why isn’t there a straight pride but, it’s actually things like this that highlight there’s still a need for it.”

The mural’s original artists, The Nomad Clan, have already repainted the LGBTQ+ artwork and removed the offensive words.