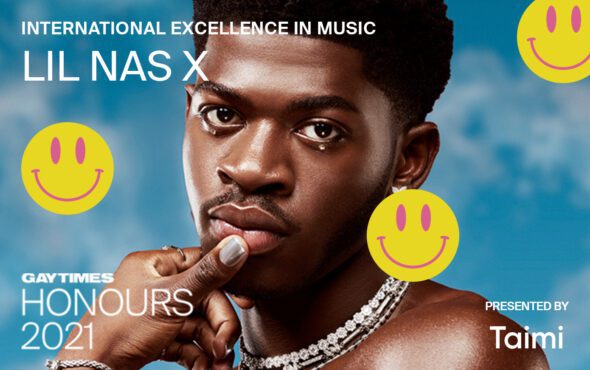 Lil Nas X has been named the recipient of this year’s GAY TIMES Honour for International Excellence in Music presented by Taimi.

Lil Nas X’s win was celebrated by an audience full of LGBTQ+ community members and allies on 19 November at Magazine London in the heart of the capital.

From releasing one of the year’s most critically acclaimed albums to an endless stream of global hits, there’s no denying that Lil Nas X is the definition of International Excellence in Music.

The artist has consistently used his platform to champion LGBTQ+ rights and music videos for songs like Montero (Call Me By Your Name), Industry Baby and That’s What I Want all bring queer storytelling and representation to the forefront.

The GAY TIMES Honour for International Excellence in Music was presented by Taimi.

Jake Vygnan, the company’s COO & Co-Founder, said: “Taimi is extremely glad to be a part of GAY TIMES Honours for the third year in a row. GAY TIMES Honours recognise the best in LGBTQ+ talent, activism and culture.

“So, it is a perfect fit for Taimi which is a global company to present this GAY TIMES Honour to Lil Nas X. Taimi provides the best space for LGBTQ+ people to be their authentic self. Lil Nas X embodies authenticity. His unique style crosses cultural and language barriers.

“Lil Nas X is a groundbreaker. He is not only one of the most influential artists in the world but a true inspiration to us all.”