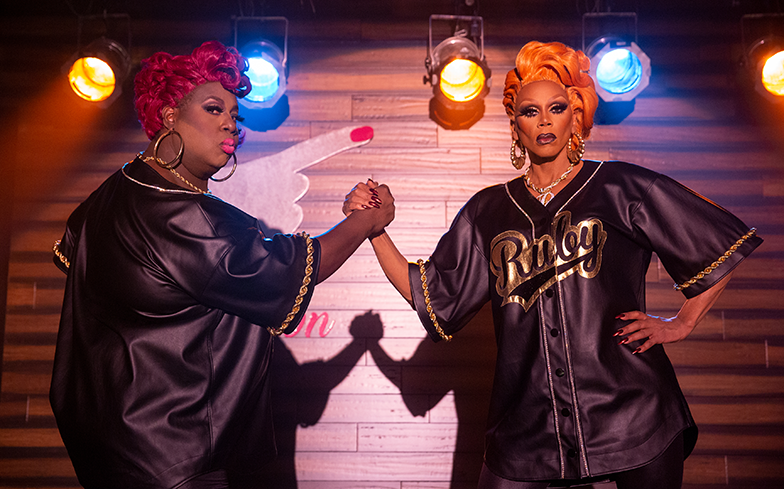 “Cher’s not white, Cher is everything!”

Whew honey, this is going to be RuPaul’s year isn’t it? Not only is the six-time Emmy Award-winner serving us a new season of Drag Race and All Stars, but we’ll be receiving another instalment of Drag Race UK later this year.

But first of all, Mama Ru is reminding us why she’s the most iconic drag queen in HERstory by flaunting her acting chops (both dramatic and comedic) with a starring role in the new Netflix Original series, AJ and the Queen.

The series follows the drag icon as Ruby Red, a bigger-than-life but down-on-her-luck drag queen who travels across America in a rundown RV from the 90s, accompanied by a wise-cracking 11-year-old orphan called AJ (played by Izzy G).

It’s fun, hilarious and without-a-doubt the most queer television series ever commissioned by Netflix, so it didn’t take us long to binge all 10 episodes. We rounded up five of the most sickening moments from the series – get your jush below.

“Cher’s not white, Cher is everything!”

After AJ stows away in Ruby’s RV, the two travel to their first drag club destination in Pittsburgh, where they cross paths with Ruby’s longtime frenemy and fellow drag performer, Alma Joy (played by Sex and the City star Mario Cantone). A flashback reveals the two had a falling out of epic proportions when they showed up to the same gig in Tina Turner drag. “How are you the better Tina Turner bitch? You’re white!” we witness Ruby shout at Alma, to which he responds, “That doesn’t mean shit! You do Cher!” RuPaul’s delivery of the next line is, in the words of Laganja Estranja, “TOO FUCKING MUCH!” She screams: “Cher’s not white, CHER IS EVERYTHING!” It was perfection. Two middle-aged drag queens arguing over Tina Turner and Cher? This is what we signed up for.

Thanks to several faults with the RV that total $2000 in damages, Ruby is forced to enter a wet t-shirt competition to pay off the mechanic. To the beat of Pretty Poison’s legendary 1987 dance-pop anthem Catch Me (I’m Falling), Ruby sashays into the (very heterosexual) bar, and with the help of her enormous breastplate, fools the customers into thinking she’s a cisgender woman. Seeing RuPaul perform on stage is rare these days, so it left us gooped and mothertucking gagged, especially because she gave it everything she had. Oh, and the malfunction at the end? LORDT! We ain’t saying shit, so… get watching!

This is, hands down, our favourite moment from the series. In Mississippi, Ruby reunites with her best squirrel friend Fabergé Legs, played by season four, All Stars 1 and All Stars 4 alum Latrice Royale. When explaining their relationship to Fabergé’s posse, the audience are blessed with a flashback of the two performing Salt N Pepa’s classic hip-hop anthem, Push It. Life! Was! Given!

In the sixth episode, Ruby and AJ make a stop at an RV park and meet three eccentric, heterosexual ladies who are preparing for their annual production of Grease. They ask Ruby if she’ll help them spice up the show, to which she politely declines, but later accepts after seeing its lack of… pizzazz. After a couple of arguments about Ruby’s bossiness, the show is soon underway with AJ in the role of Danny and the son of a conservative, heteronormative family as Sandy. His father soon drags him off stage, resulting in Ruby giving him a much-needed pep talk about how he needs to accept his son – otherwise he’ll lose him. He then emerges from his room in a dress, shotgun in hand and confidently tells his father: “Daddy… I’m wearing this dress.” Guns can sashay away, but the attitude on this little queer person? SHANTAY YOU STAY.

One of the most sickening parts of AJ and the Queen was seeing RuPaul provide a massive platform to so many legendary queens throughout Drag Race HERstory. Although a select few were given more screen time than others, every queen got a chance to showcase their charisma, uniqueness, nerve and talent (and in some cases, synergy). Latrice as Fabergé Legs is an obvious standout, as well as Monique Heart, who left us slain every time she hit the stage as Miss Terri Tory. It was also a gag to see queens who we never we thought would share the screen together, such as Kennedy Davenport, Jade Jolie, Mariah Balenciaga, Trinity the Tuck and Jujubee. Here’s hoping season two comes around for even more cameos – our fingers are crossed for Bebe Zahara Benet and Tammie Brown.

The first season of AJ and the Queen is available to stream worldwide on Netflix – watch the trailer below.