Zolita on why she incorporates witchcraft into her music 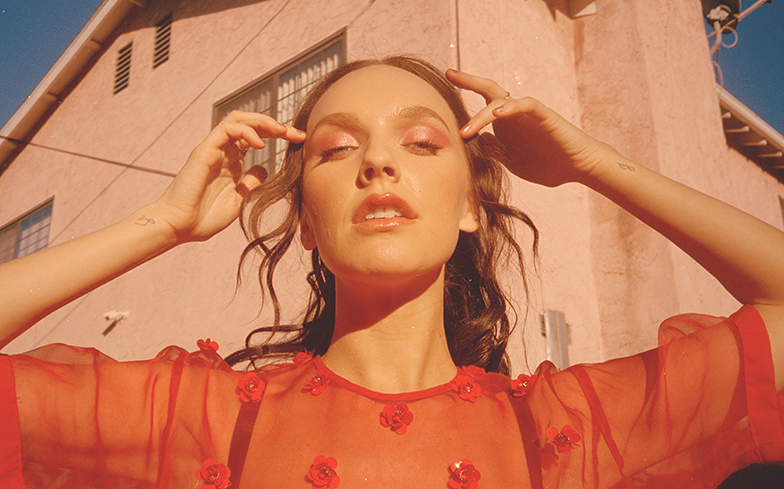 The self-described “practicing witch” on why it’s important to explore female sexuality and feminism in her music.

Zolita first made her mark on the queer music scene in 2015 with the release of her lesbian dark-pop anthem, Explosion.

Since then, the American singer-songwriter has added several biographical LGBTQ bops to her ever-expanding discography, which will soon be followed by her sophomore EP later this year.

When we caught up with the self-described “feminist lesbian woman”, she told us it’s important for her to be out-and-proud in order to “fill that void and be that person” she needed growing up – and she does this by including female pronouns within her music. “Pronouns are so important because it normalises the queer experience and makes people feel valid,” she explained.

We also spoke to Zolita about her brand new banger Truth Tea, the challenges she faces as a new queer artist in the music industry, and how she uses witchcraft as a form of self-empowerment.

You describe your music as witch-pop. How did that come about?
I’m a practicing witch and I practice magic in my daily life as a form of self-empowerment. I definitely incorporate my experience with that into my music. I love witch-pop or witch-trap as an aesthetic and sonic sub-genre! As for my practice, everyday is different. I do kundalini yoga and channel with tarot cards regularly. And then I use new and full moons as an opportunity to do longer spells. The spells can be as specific as needing a certain amount of funding for a music video, or they can be more general spells for success, positivity, etc. This year I want to work on more heart strengthening spells. I’ve been in a super dark and angry phase and that’s not really my default personality, so I would love to bring back a little bit of my softness and heart openness. Were you in a dark phase for your Truth Tea video?
Yeah. Truth Tea is one of my darkest and angriest videos and songs, which was new for me to tap into, because I’m such a vulnerable person and I usually write from a place of sadness and hurt. This was the first time where I was like, ‘I’m gonna fight back and make something from a place of anger.’ It was important for me to feel that.

What’s the story behind the song?
I was set to release Black Magic as my next single but then something traumatic happened in my life. I found out my ex had been cheating on me with a lot of men throughout our two year relationship. I needed to process my pain and anger, so I made Truth Tea. Thematically, Truth Tea is about being served the truth you don’t necessarily want to hear. The song is a dance bop though which I love! I love how lighthearted the beat and production is in contrast to the darkness of the lyrics. Can we expect an EP or album later this year?
Right now, I have enough material to release another EP. It all ties together nicely as a full story, so I’d love to put out that dark period of material and then move on. Black Magic will be the second single off of this EP.

As a new queer artist breaking through the industry, what is the biggest challenge you face?
I think the biggest challenge I face as a queer independent artist is finding funding to make the work that I do. I have so many ideas and I have such an incredible team, so I have all the things I need to make the video, except the funding. Cliche independent artist problem!

You can’t really tell by watching your videos because they are so well done.
I’ve set a really high bar for myself with my visuals and aesthetic, and that level of production value is what I’m known for. Sometimes I have people on my team or other people in my life say, ‘Oh can’t you do an easy low budget video for once? Just shoot something with a DSLR!’ And I can’t! I think that the essence of my project is the videos, more-so than the music. I can’t downgrade now. I’d rather wait it out a little bit and get a budget that can carry out my vision. If you can do these videos with no budget, then I can’t wait to see what you can with money…
Yas! That’s what my team and I always say. We pull some crazy shit for next to no money, imagine if we had a budget? How next level everything could be?

What do you think are the main challenges LGBTQ artists face in the industry right now?
I think some LGBTQ artists feel like they’re pigeon holed into just that category, gay music, queer music. For now, I personally don’t mind being categorized like that, because as long as heterosexuality is the assumed norm, we need these categories for young people to find them, and for people to understand them. But I can understand why some artists might be annoyed and feel limited by that label.

You identify as a proud feminist lesbian woman. How important was it for you to be open about your sexuality from the start of your career?
Super important, because I grew up without any proud, femme lesbians in pop music. From the very beginning, I wanted to fill that void and be that person that I didn’t have growing up. It was never a question whether or not I’d be openly and authentically myself as an artist. There’s still a few artists who are openly gay, but don’t use pronouns in their music, whereas you do.
That’s always been so important to me. Some artists are like, ‘I want everyone to be able to relate to it,’ but I’ve been listening to quote on quote straight music my whole life, and I’ve been able to project myself onto and relate to those stories. So it shouldn’t be a problem for straight people to listen to a girl sing a song with female pronouns and not be able to find themselves in it. That’s still a bit of internalized homophobia. Pronouns are so important because it normalizes the queer experience and makes people feel valid.

How important is queer visibility for LGBTQ youth in the media?
It’s everything. Having queer stories in the mainstream media, whether it’s in film or music or TV shows, validates queer people’s experiences and makes them okay, especially for young people who are questioning or are unsure. Seeing these stories are gateways to feeling more certain about yourself. There’s more visibility than ever before, but I think there needs to be more variety in the types of queer stories being told. You’ve been outspoken in the past in regards to female sexuality and feminism. How important are these topics for you to explore as an artist?
I think my desire to make art is motivated by wanting to explore these topics. Female sexuality is an underrepresented topic in pop music, and I think it’s incredibly important for there to be a diverse range of authentic experiences and perspectives for young girls to identify with. My sexuality and identity as a feminist affects every moment of my life, and the stories I tell in my work are always very personal, so naturally most of my work incorporates my queerness in some way.