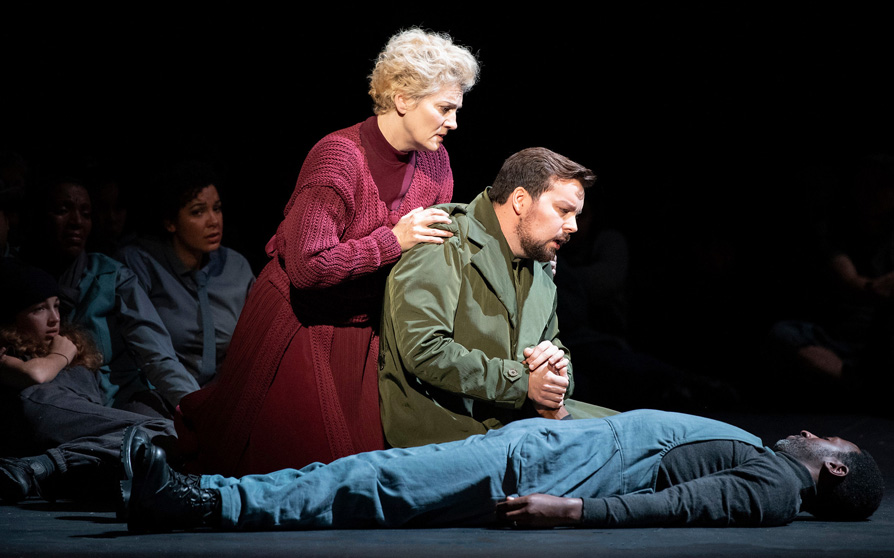 First commissioned for the consecration of the new Coventry Cathedral in 1962, following the destruction of the original 14th-century structure during a 1940 bombing raid, War Requiem became an immediate success and is now a staple of choral repertoire. This new staging by Daniel Kramer, with accompanying photography by Wolfgang Tillmans, is being performed to mark the centenary of the end of the first world war.

We weren’t always completely sold on the visual elements – the six movements were staged with varying degrees of success. Some of the photographs and accompanying text were quite powerful, and the lighting of a sudden snowfall to resemble a mushroom cloud was particularly visually arresting.

However, for much of the show we felt the staging didn’t really add anything to the music, and there were a handful of unsubtle moments which were a little distracting. Most of the staging was rather simplistic, the set comprising of three screens and the ensemble moving around the stage to create a series of tableaux.

Of course the main attraction here is the music and Martyn Brabbins beautifully conducts a sizeable ensemble, including the 80-strong chorus and a children’s choir of 40 singers, accompanied by the full ENO orchestra. The soloists are superb throughout, too; Roderick Williams and David Butt Philip turn in commendable performances and Emma Bell brings a tangible desperation to proceedings. Performed in the beautiful, vast space that is the Coliseum, it all adds up to a rather lavish audio treat.

We’re aware that a night at the opera might not appeal to everyone, but we were pleasantly surprised with War Requiem. Weighing in at little over 90 minutes, with some contemporary staging and superb music throughout, it proves to be a very accessible and enjoyable evening at the opera. Well worth checking out.