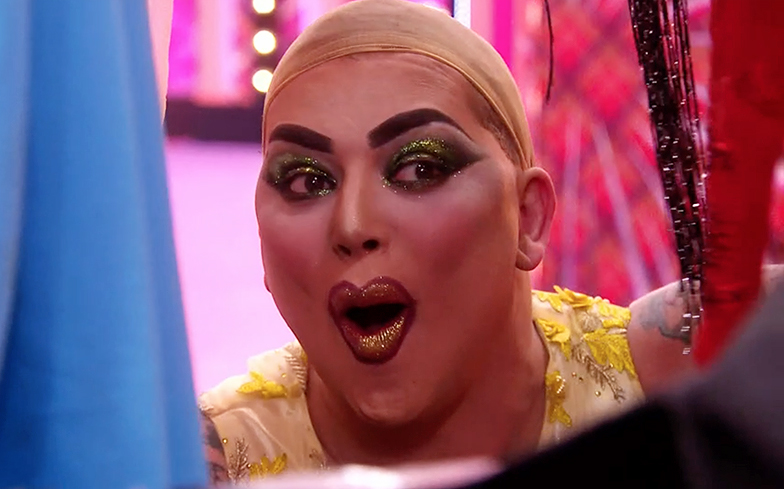 Cheryl wasn’t lying when she told us to expect “drama and conflama”.

Throughout the first five episodes of RuPaul’s Drag Race UK, there’s been subtle shade amongst the contestants and a few digs here and there, which was to be expected because newsflash: drag queens are shady. It’s part of their culture.

But overall, it really does feel like it’s been the first season of – in the words of Lashauwn Beyond – RuPaul’s Best Friend Race. This week however, the “drama and conflama” was amped up a notch between two contestants. In the episode’s opening scene, the five remaining competitors – Baga Chipz, Blu Hydrangea, Cheryl Hole, Divina De Campo and The Vivienne – sashay back into the werkroom and discuss the previous challenge.

Just to rehash your memory: the queens competed in two opposing girl bands and recorded the MNEK-produced pop anthem Break Up Bye Bye. Baga, Divina and Blu comprised the first team, Frock Destroyers, while Cheryl, Crystal and The Vivienne formed Filth Harmony. Crystal was ultimately told to sashay away and The Vivienne landed in the bottom two for the first time.

The Vivienne – feeling rattled after lip-syncing for her life – tells the others that if she could’ve chosen her team, she would’ve picked Cheryl first. This offends Divina. “I’ve spent the past 15 years choreographing shit, directing stuff, writing music,” she says after an awkward pause. “None of you seem to know that I do this fucking stuff. Wake the fuck up.”

The Vivienne riles her feathers even further by claiming Cheryl’s choreography skills are more “fresh”. Divina later expresses her frustration to Cheryl and Blu, before The Vivienne sashays over to clear the air. It didn’t go too smoothly…

“You clearly don’t value what I do as a drag queen,” states Divina, to which The Vivienne responds: “I’ll be honest with you, now that I’ve seen you here, you are 20 times the drag queen you are in the outside world. Because for the past ten years, I’ve seen Divina in a red wig and a silver dress.” Divina calls “bullshit” and lists her qualifications to The Vivienne, who is visibly baffled.

Later, when asked about the friction between her and The Vivienne, Divina recounts their argument to RuPaul. The Vivienne then confronts her about it and they bury the hatchet. While it wasn’t as explosive as Phi Phi vs Sharon, Eureka vs The Vixen and Tyra vs everybody, it feels like an indication of what’s to come. Will it be Divina vs The Vivienne in the final showdown?

Drag Race UK airs every Thursday on BBC Three. The first five episodes are now available to stream on BBC iPlayer. Next week, the top four queens will give their loved ones a drag makeover. Chewing Gum star Michaela Coel will make her judging panel debut, while Alan Carr will return after a two-week absence.