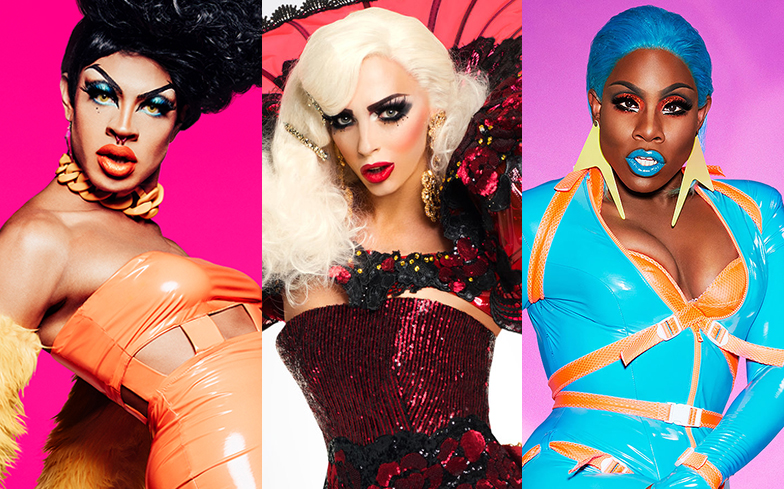 NEWSFLASH HENNIES: this season of All Stars will be unlike any other in Drag Race HERstory.

Premiering this Friday on VH1 (5 June), the fifth season of the acclaimed series will yet again see the ruturn of 10 legendary competitors who will battle for a cash prize of $100,000 doollahz and a spot in the Drag Race Hall of Fame.

Unlike past seasons, which saw the top two queens lip sync for their legacy, there will only be one winner of the maxi-challenge. Twist is: they will be lip syncing against another past competitor revered for their stage prowess.

If they win, same rules apply: they win a tip of $10,000 doollahz and the power to chop one of the bottom queens.

But if the lip-sync assassin wins, the eliminated queen will be determined after a majority vote from the rest of All Stars 5 cast, and the $10,000 will roll over until the next competitor wins a lip-sync. “Sickening, no?”

Since the twist was ruvealed last month, fans have been speculating over which legendary queens will make a comeback. Thankfully, drag detectives on Reddit have some rusearch and they’re convinced they gots the T.

How many lip syncs? 5

But how many has she won? 4

Who we want her to lip sync against: Alexis Mateo, India Ferrah, Shea Couleé

Fact: Alyssa Edwards is one of the greatest performers in Drag Race HERstory with four lip sync wins to her name. Her first against Roxxxy Andrews to Whip My Hair is RuPaul’s all-time favourite, and her showdown with Tatianna on All Stars 2 is widely regarded as the most jaw-dropping lip sync the show has ever witnessed. (We even ranked it at number one on our list – see here.) Alyssa has only lost once, and that was to her sworn rival (at the time) Coco Montrese; even then, it could’ve gone either way.

How many lip syncs? 6

But how many has she won? 3

Who we want her to lip sync against: Jujubee, Mayhem Miller, Miz Cracker

While many queens on this list boast terrific lip syncs, not many boast iconic lip syncs. Manila Luzon’s lip sync to MacArthur against fellow Heather member Delta Work will live in infamy as one of the most intense, batshit-crazy performances on the main stage. After losing lip syncs to Raja and Jujubee in season three and All Stars 1, Manila didn’t win another until she channelled the late Whitney Houston (and Alyssa Edwards) against Trinity the Tuck in All Stars 4. Later, she lost for the last time to Monique Heart and tied with Monét X Change, bringing her to a total of three wins.

How many lip syncs? 7

But how many has she won? 4

Who we want her to lip sync against: Mariah, Miz Cracker, Shea Couleé

Like Manila Luzon’s MacArthur Park and Roxxxy Andrews’ wig ruveal, Monét X Change’s fake jump split has been immortalised by Drag Race fans. In our lip sync ranking, we wrote: “If we had access to Harry Potter’s resurrection stone, we’d revive Leonardo Da Vinci and force him to paint a portrait of Monét mid-jump so it could be hung in the Louvre for all eternity.” And yes, we will stand by that until the day we die. Monét’s six other lip syncs were also gag-worthy, especially her controversial loss to Kameron Michaels, but never quite reached the same heights. Neverthe-mothertucking-less, we can’t wait to see what other splits, flips and tricks the All Stars 4 champ has up her sleeve – or underneath her wig.

How many lip syncs? 2

But how many has she won? 1

Who we want her to lip sync against: Jujubee, Ongina, Mayhem Miller

We’re huge Morgan McMichaels stans, but her placement here feels strange. Although her season two lip sync to Sonique for Queen of Hearts left fans slain – Ru said it was one of the “tightest” up until that point – Morgan has only won one lip sync in total, which wouldn’t technically qualify her as an assassin. However, there’s no denying she’s an accomplished and skilled performer because the lip sync she did lose – against the late Sahara Davenport – could’ve been declared a double shantay. We were pissed when Morgan didn’t lip sync on All Stars 3, so if this is true, we are – in the words of Monique Heart – “gooped”. It’s time for the rudemption of Morgan Michaels.

How many lip syncs? 2

Who we want her to lip sync against: Alexis Mateo, Blair St. Clair, Shea Couleé

Roxxxy Andrews may not have delivered in the maxi-challenges on her most recent Drag Race run, but there is one department she’s never failed in: lip syncing. Although she only has two to her name, Roxxxy boasts a perfect track record with zero wins. Her first, to the beat of Whip My Hair against Alyssa Edwards, changed the mothertucking game for the franchise when she unveiled a wig underneath her wig, setting the stage for Sasha Velour’s iconic rose petal-extravaganza and the ‘Wigs on Wigs on Wigs’ runway theme in All Stars 3. Will she keep her perfect record?

How many lip syncs? 4

Who we want her to lip sync against: Derrick Barry ONLY (but Blair St. Clair could be cute)

Yes, Derrick Barry only. Britney vs Britney? Ooh La La. As we mentioned above, Tatianna boasts one of the most legendary lip syncs in Drag Race’s groundbreaking 11-year run to her name. This is a queen who gave Alyssa Edwards, the Dancing Queen (stream now on Netflix for a more enjoyable existence), a run for her money in her black, 72-inch thigh-high boots. We saw how much Tatianna improved as an entertainter since her stint on season two – imagine how much of a lip sync powerhouse she is now? Chills, honestly. If the rumours are true and she sashays down that runway one more time, then Tatianna: THANK YOU. Thank you. Really, thank you.

How many lip syncs? 4

Who we want her to lip sync against: Alexis Mateo ONLY

Vanessa Vanjie Mateo is the only Drag Race queen to achieve iconic status after losing a premiere lip sync. In season 10, the formidable performer became a viral sensation after reciting her middle name several times as she sashayed away. Spider-Man himself came out as a Vanjie fan, as well as Mama Ru; wearing a ‘Miss Vanjie’ necklace on Time 100’s Gala Red Carpet. She got her rudemption arc in the following season, triumphing over Plastique Tiara and Shuga Cain, before getting the boot once again by her lover, Brooke Lynn Hytes. Like Tatianna, we only want Vanjie to lip sync against one All Stars 5 contestant: Alexis Mateo, aka her drag mother. We’ve witnessed hundreds of lip syncs over the years, but never a mother-daughter battle. Give it to us Ru!

How many lip syncs? 3

But how many has she won? 3

Who we want her to lip sync against: Alexis Mateo, Jujubee, Shea Couleé

April 18, 2019. Remember that date? An earthquake, which was unconfirmed by scientists and straights, shattered the globe after gays across the world let out a collective “YAAAAAAS!” when Brooke Lynn Hytes and Yvie Oddly embraced their inner Cirque de Soleil in a sickening display of acrobatics and ruveals for Demi Lovato’s Sorry Not Sorry. Unsurprisingly, it resulted in one of Drag Race’s rare double shantays, and Yvie would go on to win another lip sync against A’Keria C. Davenport and Brooke; the latter of which earned her the title of America’s Next Drag Superstar. If Yvie stomps down that runway for All Stars 5, it’d be best for Ru to have some safety measures in place because it’ll be Earthquake: The Shequel.