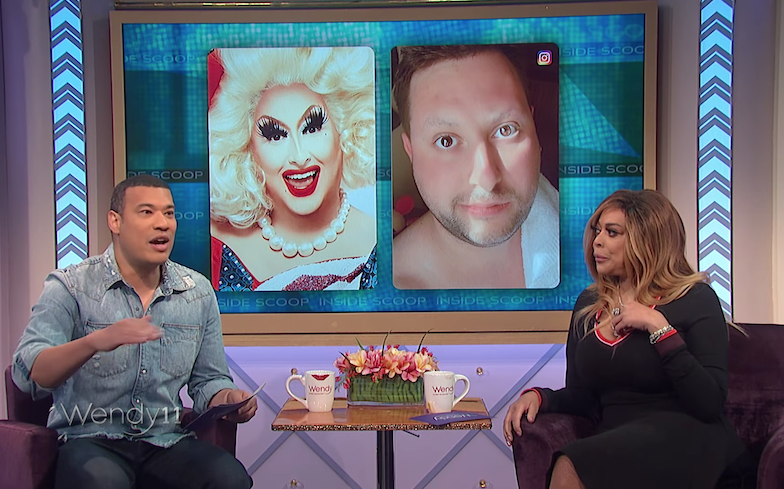 On 9 March, the television host invited comedian and personality Michael Yo to discuss the Sherry Pie catfishing scandal.

Earlier this month, it was announced that Sherry – birth name Joey Gugliemelli – had been disqualified from RuPaul’s Drag Race season 12 following allegations from five aspiring actors that they’d been catfished by the performer.

Sherry reportedly posed as a fake casting director called Alison Mossey from HBO, and tricked several men into performing sexual acts on camera for high profile acting opportunities, such as a film called Bulk, that never came to fruition.

During their segment, Yo and Williams couldn’t contain their laughter at the incident, with the former going as far to victim-blame by saying the men affected by Sherrie’s actions should “do research if someone reaches out to you like that.”

Ben Shimkus, one of Sherry’s victims, later called out the show for mocking him on national television and because his “story was told incorrectly, people laughed at me, and the conclusion at the end of the piece was dismissive and vapid.”

Writing for Gay Cities, Shimkus said he “immediately became angry” when Yo made the audience laugh at his story.

He continued: “With time to reflect, I am attempting to maintain moral integrity while not becoming bitter about this situation that has put me on national television. I’ve found other ways to interpret this moment.”

Since Sherry’s actions have come to light, she has been heavily edited out of Drag Race season 12, with no screentime for confessionals; only her performance in the challenge and her runway has been aired.

In a statement, Sherry apologised to her “sisters of season 12 and honestly the whole network and production company” and explained that she’s been seeking help and receiving treatment since returning to New York City.