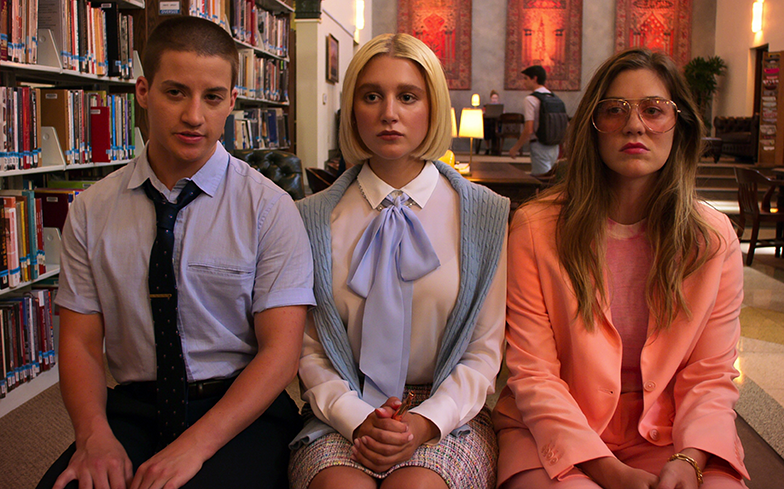 “How do we help everyone? How do we give everyone an opportunity? Ultimately, that’s the message of this show.”

After months of anticipation and hundreds of hilarious memes of Jessica Lange’s character summing up the gay agenda, this week finally sees the premiere of Ryan Murphy’s satirical comedy-drama, The Politician.

The series stars Ben Platt as Payton Hobart, a wealthy student from California who is determined to become the President of the United States. First, he has to navigate “the most treacherous political landscape of all: Saint Sebastian High School”.

Ahead of its Netflix debut this Friday, we spoke with Laura – who plays Payton’s right-hand woman McAfee – about how the show represents the “future of politics” and the importance of characters not being defined by their queer identity.

I’ll start off with the most important question: Do gays just munch butts and celebrate Halloween?
Oh yeah, it’s the perfect way to describe them. It’s the best line of the whole show! It’s brilliant. I can see it on every meme, every shirt, it’s the gay Pride slogan of 2020, probably, so I’m very excited. She’s not wrong!

What drew you to the role of McAfee?
I think her intelligence is what is so exciting for me and I think that she’s really cool. She makes being smart cool, and she’s thought of every possible avenue for every scenario, so it’s really fun to play someone who’s calculated, but also feels and has empathy and wants the world to be a better place. She sees him Payton as a winner, and she sees the future being a better place with him leading. So that’s really exciting and fun to play.

Why do you think McAfee is so dedicated to Payton?
She has this amazing moment later in the series, which I think I can say because it’s not spoiling anything, where she says, “I don’t know what makes him tick, but every single day he wakes up and thinks about how he’s going to make the world a better place.” I love that that’s why she loves him and that’s why she’s so behind him, because she just believes in him and his ability to want to make the world better.

If you had to compare McAfee to any political figure, who would it be?
I’ve thought about this a lot! I see her as a young Gloria Steinem, even the way she dresses – she probably has posters of Gloria Steinem in her room [laughs]. She’s such a feminist, but she’s a new-wave Gloria Steinem. She’s young and has these ideas, and obviously living in our century at that age, so it’s very very interesting, to be that young and passionate about all the things that she cares about.

What do you think the show says about our current political climate?
It’s important because it’s making everyone feel seen and heard. I think that is what the future of politics should be. It’s coming up with solutions that better everybody, it’s not just for one particular group. As we are evolving as a society, that’s the most important thing that we need to figure out, is how do we help everyone? How do we give everyone an opportunity? Ultimately, that’s the message of this show and it’s represented in the actors playing the roles and it’s representative of the characters. We’re trying to portray the future that we all want.

The show has so many queer characters, and they’re never defined by their queerness which is quite rare to see…
That’s my favourite thing. You don’t discuss it, and that to me represents the future I want to see, where we don’t have to label who we are, we can just be. We can exist, and I don’t have to say I’m into this or into that, it’s just meeting people and we all have an understanding that it can be whatever it is. That is a Utopian world that would be so wonderful to live in.

Do you think that other shows should follow suit and have their characters be more ambiguous with their sexuality and identity?
I hope so. It’s representative of the world we’re living in. We all understand – I hope – that sexuality is on a spectrum, so we can fall anywhere within that spectrum. I think young people especially are at point where they are fortunate enough because of the path that has been paved before them, that they are able to live in that. They are able to live in that spectrum and not feel the need to explain themselves. We obviously have a very long way to go, but we’re on that path. I would hope that shows reflect that as we move forward.

Ryan Murphy is the prime example of a cis white male who is using their privilege to make a change.
That’s the brilliant thing about Ryan Murphy. He really does give everyone a voice. He goes out of his way to do that and I would argue that’s been his life’s mission. It’s really amazing, even with Glee, which I was so lucky to be a part of, that really paved the way to give America an idea of… We didn’t really get to see anything like a father-son relationship where a child was coming out and it was portrayed in a way that was digestible and relatable. People were able to see themselves in Kurt and so that really paved the way for… you know, legalising gay marriage! I think that’s what’s so brilliant about who he is, Ryan Murphy, because he’s just able to see where we’re lacking as a society and then give those a voice, those who need to be heard.

You didn’t just reunite with Ryan Murphy on the series, but you reunited with Ben Platt after working with him on Dear Evan Hansen – what was it collaborating with him again?
It’s really special. We’ve had such a special friendship for about, oh my gosh, since 2014 or 2015. He’s the most wonderful human and he’s such a leader. It’s been brilliant to watch him grow up and also grow up together, and have that whole experience. Dear Evan Hansen was so special in so many ways, and to see him do this… On the first day, he brought the whole cast together, and that’s his most amazing skill, is to make everyone feel included. I would argue that that is why this cast is so close, because he was a leader in that way. I feel very safe around him as a human and as an artist, and we have so much respect for each other. So it’s really amazing to be able to be able to work in this medium with him and to work on this show, which is so fun and so different from Dear Evan Hansen. We were sobbing every night at Dear Evan Hansen and now we can have fun [laughs].

Theo said Ben was like a camp counsellor…
Oh yeah, that’s a good way to put it!

Is it true you all go out dancing together?
Yeah, every Friday night!

Who’s the worst dancer?
Me! I’m terrible. I don’t care what people think when I dance.

Are you a flailer?
So much flailing. People step out of the way. You’re not doing it right if you’re not hitting people.

We need this footage online.
I’m sure it’s online already.

I’ll find it. Okay, so this is a bit of a spoiler, but you got to work with the Judith Light and the Bette Midler…
Yeah!

How was that? Tell me.
That was one of those days on set where everyone, including the crew, we were all just looking at each other and we were like… Everyone, the camera men, the makeup artists, we were all losing it and we were trying really hard to keep it together. They’re forces of nature. That was the highlight of the whole year for me, probably the highlight of my life.

Did you learn anything watching them on set? Because they are legendary.
Oh yeah, just their confidence alone, that’s such a beautiful thing to witness. To see people who are masters at their craft and who are able to be so comfortable in what they’re doing, and do it with such confidence… It’s like when you walk into a room and you have the choice of how you’re going to make people feel. Watching people who are so brilliant at what they do and also choose to make everyone else around them feel comfortable is such an amazing thing to learn from. It’s the most simple thing too. It was a privilege to work with so many amazing people.

I mean, the whole cast…​
Legendary!

And the final episode… I thought I was watching a different show.
That’s the coolest thing, it flips everything on its head, and it also sets up season two. In a way, it’s almost a pilot for season two. I think it was a smart way to end the season because it makes people want to know more about what’s going to happen next.

What do you hope audiences will take away from the show?
I hope it gets people excited about politics. I hope it excites young people. That would be my biggest hope, because it’s so important and I think that we’re touching upon issues that are very important. We’re talking about gun violence, sexuality, suicide we’re talking about these things that we need to get people passionate about and it’s also done in a way that’s digestible. I’m excited for what it will do for young people and if it will inspire activism.

Final question: You served main pop girl with your single Better Drugs (listen here) – have you got plans to release an EP or an album?
Oh, thank you! [Laughs] Thank you. I have an EP coming out pretty soon. So… get ready.

The Politician will launch on Netflix on 27 September – watch the trailer below.