The Masked Singer UK reveals the identity of Unicorn, and it’s a gay icon 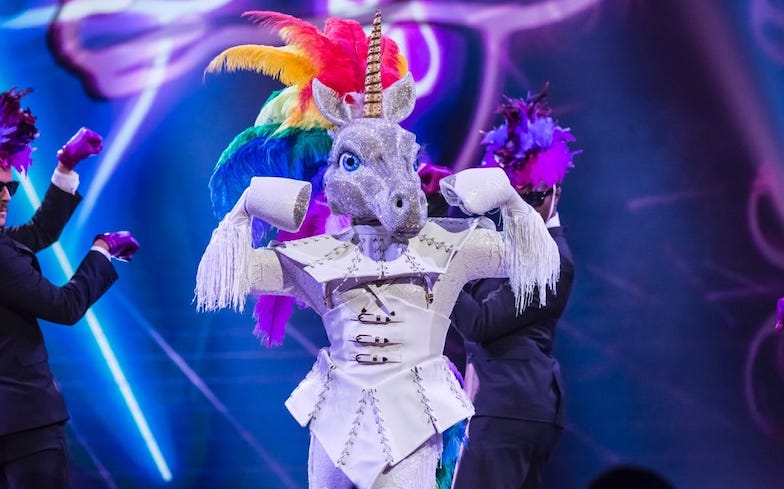 Who saw that comin’?

The latest episode of The Masked Singer UK just unveiled the identity of Unicorn and of course, it was a gay icon.

On Saturday’s episode (1 February), the seven remaining contestants competed for a place in the semi-final with more show-stopping numbers, especially Queen Bee who gave us life with the DJ Sammy version of Heaven.

Ultimately, Duck and Unicorn were booted out of the competition in the series’ first double elimination. Duck was revealed to be Skunk Anansie singer Skin, which nobody guessed correctly, while Unicorn was revealed to be… Jake Shears.

The Scissor Sisters star stunned fans week after week with theatrical and flamboyant performances of Baboosha by Kate Bush, Juice by Lizzo, Sharp Dressed Man by ZZ Top and Girls & Boys by Blur and was previously seen as a frontrunner.

“I’ve been having so much fun! it’s just right up my alley,” the star said after he was unmasked. “It was a no brainer for me!”

Jake added: “It was hard at first, because friends could tell I was excited about something but I couldn’t tell them which made them crazy, so I just had to learn to pretend like there was absolutely nothing going on!”

There are now five contestants remaining in the series: Queen Bee, Fox, Monster, Hedgehog and Octopus. Next week’s episode will feature another double elimination, with three celebrities moving forward to the final.

Watch Jake Shears perform Boys & Girls as Unicorn in his final performance below.