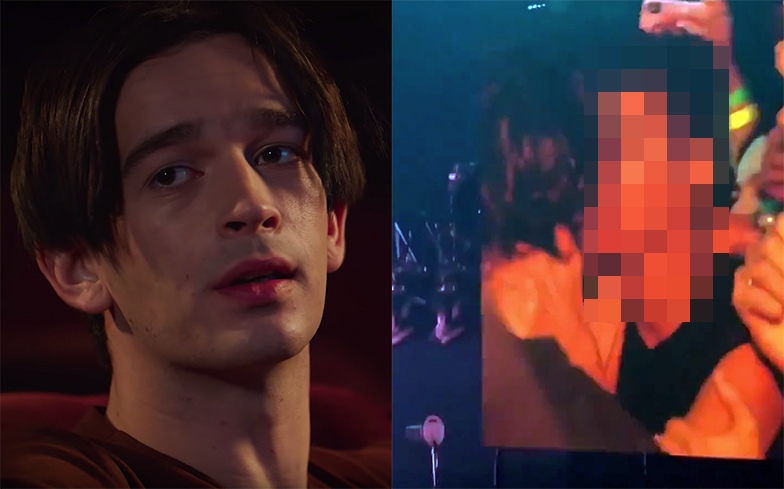 This image has been pixelated to protect the fan’s identity.

“I wouldn’t have done anything differently given the chance again.”

The 1975 star Matty Healy defied Dubai’s strict, archaic anti-LGBTQ laws when he kissed a male fan during a performance.

As the band performed Loving Someone, from their second studio album I Like It When You Sleep, for You Are So Beautiful yet So Unaware of It, Matty left the stage and kissed the fan after he proposed marriage.

Although fans praised Matty for recognising his queer fans, some were worried about the consequences. In Dubai, homosexuality is illegal and is punishable with up to ten years in prison.

“It’s all fun and games until he winds up dead,” wrote one Twitter user, while another said the fan could face imprisonment: “I’m scared for the fan though. A lot of people filmed that. He could go to jail for it.”

Shortly after the show, Matty tweeted: “Thank you Dubai you were so amazing. I don’t think we’ll be allowed back due to my ‘behaviour’ but know that I love you and I wouldn’t have done anything differently given the chance again.”

“But who knows maybe they will let me back in let’s just wait and see.”

Last year, Matty revealed that he’s kissed men in the past, but doesn’t have “carnal, sexual feelings” towards the same sex.

In an interview with Shortlist Magazine, he said: “The other sex is still attractive. It’s just that sex is weird, isn’t it? Do you know what I mean? It’s like, ‘Do I want to do blow jobs with a guy?’ No. Do I want to a kiss a guy? Yeah, kind of…”

Matty recalled seeing two male dancers kissing backstage at a show, and elaborated on how it shaped his own experiences.

“The first passionate kiss I saw was between two blokes,” the 29-year-old admitted. “I remember it vividly.”

After he witnessed it, he craved that kind of intimacy.

“As a kid, if you see two grown-ups kiss properly, you’re a bit like: ‘What’s that? What’s that feeling? I didn’t know we did that with each other.’ I think my perceived ideas of masculinity stem from my first idea of sexuality.

“Well, you can look at whether sexuality is a social construct – which, of course, it isn’t. But when I was a kid most of the people [around me] who were successful and doing what they wanted to do were gay.”

Related: Matty Healy says he was bullied as a teenager for “looking like a poofta”.