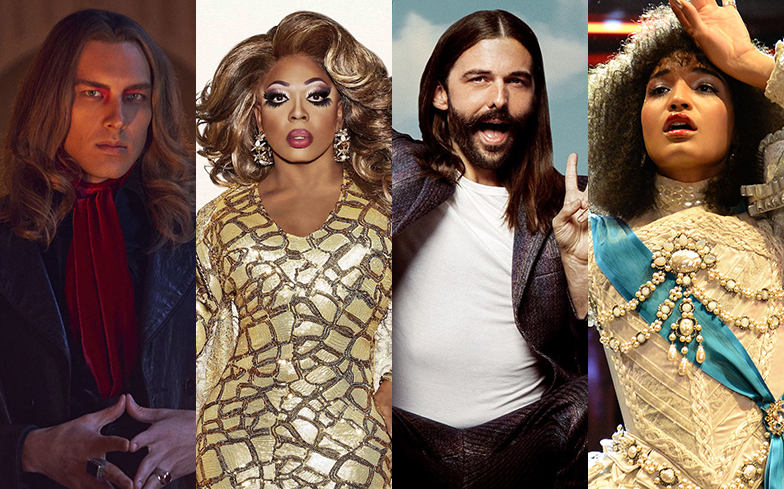 2018 has been a phenomenal year for queer television.

The year kicked off with Ryan Murphy’s acclaimed second run of American Crime Story, followed by the third instalment of Drag Race All Stars, which featured one of the most controversial crownings in the show’s HERstory.

Over the course of the year, several other shows returned (American Horror Story, Orange is the New Black, GLOW), and others debuted (Pose, Queer Eye, Chilling Adventures of Sabrina), and left us completely slain.

It’s been one of the most diverse years for LGBTQ representation, with a recent report from GLAAD revealing that the amount of queer characters on our screens has increased by over 100 to a new record.

In celebration, we’ve compiled a list of our 15 favourite queer shows of 2018. We haven’t ranked them in order, but we have named our number one favourite of the year – you’ll have to scroll to the end for that one…

The latest instalment of American Horror Story was, without a doubt, the most gag-worthy, fan-pleasing season of any show we’ve ever seen. The crossover between Murder House and Coven (and later Hotel), didn’t disappoint, bringing together some of the most iconic characters in the show’s history: Madison Montgomery, Cordelia Foxx, Myrtle Snow, Queenie and Marie Laveau. Jessica Lange made her American Horror Story comeback as her first, Emmy Award winning character Constance Langdon, while Sarah Paulson starred as her most sinister character to date: Ms Venable. Our only critique is that the season spent far too much time in the past – but how can we complain when it wrapped up so perfectly? Darren Criss won his first ever Emmy for his acclaimed portrayal of serial killer Andrew Cunanan in Ryan Murphy’s lauded limited series, American Crime Story: The Assassination of Gianni Versace. The American actor won for Outstanding Lead Actor in a Limited Series or Movie, beating out stars such as Antonio Banderas, Benedict Cumberbatch, Jeff Daniels, Jesse Plemons and John Legend. The series told the true story of the death of legendary fashion designer Gianni Versace, who was murdered by Cunanan on the steps of his home in 1997, and boasted an ensemble cast with the likes of Edgar Ramirez, Ricky Martin, Penelope Cruz and Judith Light. British actor Ben Whishaw received unanimous praise for his portrayal of Norman Scott earlier this year when he starred opposite Hugh Grant in Sony Pictures Television/BBC drama A Very English Scandal. The real-life story of Liberal Party leader Jeremy Thorpe, the three-part series saw the politician embroiled in a secret gay love affair during the height of his career in the late 1960s, only to then go to extreme lengths to make sure the truth didn’t come out. Several publications have labelled the series as one of the finest in British history, and we’re inclined to agree.

The CW series Black Lightning follows the title character – Jefferson Pierce (played by Cress Williams) – a retired superhero with the ability to harness electricity, who becomes the headmaster at a high school. He returns to fighting crime when a local gang – The One Hundred – threatens citizens in the community. American actress Nafessa Williams plays Pierce’s daughter Anissa, a lesbian medical student and part-time teacher who is able to manipulate her body’s density at will. With her portrayal, she became the first lesbian superhero of colour on mainstream television. Since its debut, the show has received acclaim for its maturity, and portrayal of race and sexuality, and has been renewed for a second season.

The Chilling Adventures of Sabrina Netflix’s gritty reboot of Sabrina the Teenage Witch received praise when it premiered back in October, with fans and critics lauding its dark tone and inclusion of LGBTQ characters. This time out, things were darker, bloodier, and a whole lot more spookier, with classic characters reimagined for a screen adaptation more closely loyal to the Archie Comics source material than ever before. The series has been renewed for a third and fourth season, with its second to premiere in April next year. Drag Race fan-favourite Alyssa Edwards received her own eight-part docu-series earlier this year, which followed her as she attempted to juggle her career as a dance coach and a world-famous drag performer, as well as finding time for her family and love life. We’re used to seeing Alyssa, the tongue-popping jump-splitting sickening queen, but on the series, we see Justin, the choreographer from Misquite, Texas, and it’s a wonderful insight into one of the show’s most extraordinary contestants. Season two please! Spanish teen drama Elite follows three working class friends Samuel (Escamilla), Nadia (Hammani) and Christian (Herrán), who are sent to an elite boarding school after their previous school was destroyed. Since its debut, fans have ‘shipped’ the couple #Omander. It has been renewed for a second season. Netflix’s original series GLOW debuted last year to highly positive reviews, but it wasn’t until its second season where it came into its own. The American dramedy revolves around a fictionalisation of characters from the syndicated women’s wrestling circuit from the 80s, the Gorgeous Ladies of Wrestling. Lead actress Alison Brie has been lauded for her portrayal of Ruth “Zoya the Destroya” Wilde, and the series has been commended for its queer themes and female empowerment.

Grey’s Anatomy legend Sandra Oh made her television comeback earlier this year when she starred alongside British actress Jodie Comer in BBC drama, Killing Eve. The series follows Oh as a desk-bound MI5 officer who becomes obsessed with tracking down notorious assassin Villanelle (Comer). Since the series debuted back in March, fans have noticed a hell of a lot of sexual chemistry between the two leads – will this be explored in the second season? We hope so… For Oh’s performance, she became the first actress of Asian descent to be nominated for the Primetime Emmy Award for Outstanding Lead Actress in a Drama Series.

Orange is the New Black After a lacklustre fifth season, Orange is the New Black returned this year and delivered one of its finest instalments to date. The season took place in a maximum security prison after the inmates incited a riot at Litchfield Penitentiary, and introduced us to several incredible new characters, particularly Carol and Barbara Denning. Next year, the series will return for its seventh and final season – let’s hope it hits as many highs as the sixth. The Queer Eye reboot became a massive success back in February, particularly due to its incredible, loveable cast of experts: Karamo, Tan, Jonathan, Antoni and Bobby. Its success led to a second season just three months after it debuted, with a third season confirmed to premiere early next year. At the Primetime Creative Arts Emmy Awards, the show won Outstanding Structured Reality Program, Outstanding Casting for a Reality Program and Outstanding Picture Editing for a Structured or Competition Reality Program. Drag Race’s tenth season  featured the most viral moment of the series so far when the iconic, groundbreaking and revolutionary contestant, Miss Vanjie, sashayed away (backwards) from the main stage and recited her own name over 12,000 times. Sharon Needles’ drag daughter Aquaria also proved to be one the most sickening fashion queens in HERstory, several fan-favourites were eliminated by lip-sync assassin Kameron Michaels, and The Vixen and Eureka provided fans with one of the most explosive feuds ever. The most recent season of All Stars may have not lived up to its predecessor, but it provided us with some legendary, gag-worthy scenes. Aja became the breakout star (that death drop tho!), season one winner Bebe Zahara Benet made an unprecedented comeback, and BenDeLaCreme broke the mother-tucking internet when she eliminated… HERSELF. We’re still not over it.

She-Ra and the Princesses of Power

She-Ra and the Princesses of Power, a reboot of the 1985 series of the same name, tells the tale of Adora and her attempts to defeat Hordak, ruler of The Horde, aka the evil army who raised her. Upon release, the series received acclaim for its diverse cast and its sensitive exploration of LGBTQ themes, which is practically unheard of in the world of animated TV. Ryan Murphy’s acclaimed drama Pose is, without-a-doubt, our TV series of the year. Set in 1987, Pose “examines the juxtaposition of several segments of life and society in New York City: the emergence of the luxury Trump-era universe, the downtown social and literary scene and the ball culture world”. The show made history by featuring the largest amount of trans actors in regular roles of any scripted TV series in history, and is set to air its sophomore season next year. We can’t wait to see what the future has in store for this groundbreaking drama.