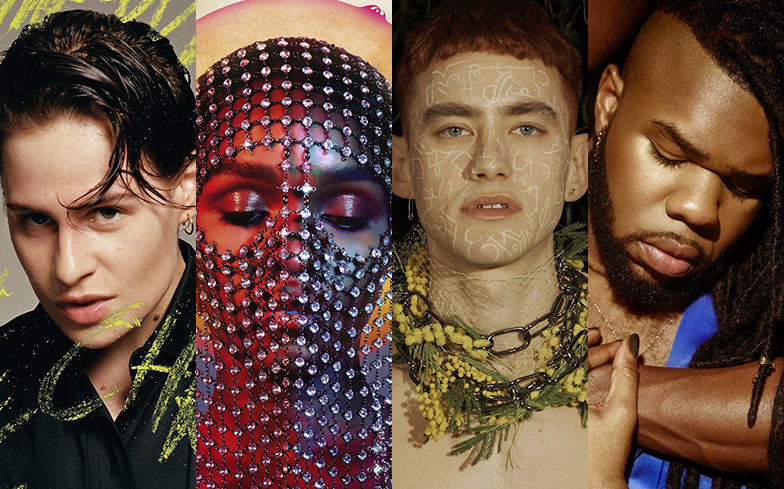 2018 has been an exceptional year for diversity in music.

It delivered us the criminally smooth debut record from rising British pop star MNEK, an album of delicious fetish rap from Tommy Genesis, and the ethereal arrival of Lesbian Jesus herself. It’s no surprise this year’s been dubbed #20gayteen.

To celebrate the sheer amount of LGBTQ excellence that’s blessed our headphones over the last 12 months, we’re revisiting our 10 favourite queer albums of the year.

We haven’t ranked them in order, but we have named our number one favourite of the year – you’ll have to scroll to the end for that one… Standout tracks: My My My!, Bloom, Lucky Strike

If there were a Grammy Award for most unapologetically gay album of the year, it would without a doubt go to Troye Sivan. Opening with a brutally honest account of his first sexual experience with an older man at the age of 17, the record erupts into a bursting celebration of queerness on lead single My My My! and continues to flit expertly between sombre melancholy (The Good Side, What A Heavenly Way To Die) and chill-pop bangers (Plum, Lucky Strike). But the album’s defining moment comes with title track Bloom, on which Troye invites a lover to “take a trip into [his] garden” and promises to “bloom just for [him]”. Only Troye could serve a bottoming anthem and make it sound so sweet. Standout tracks: Sanctify, If You’re Over Me, Hypnotised

After the immense success of debut album Communion, many fans wondered whether it was possible for Years & Years to best themselves, but those fears were laid to rest with the release of sophomore effort Palo Santo. Lead singer Olly Alexander has never shied away from discussing his sexuality and using male pronouns in the band’s music, but things got decidedly darker and queerer on Palo Santo, which mixed themes of sex, sin and spirituality in a glorious collection of electro-pop ear-worms. It was years in the making, but MNEK’s debut album Language was so worth the wait. After finding success behind the scenes as a songwriter and producer for A-listers like Madonna, Beyoncé and Kylie Minogue, MNEK finally stepped into the spotlight proper when he dropped his own full-length record in September 2018, applying his razor-sharp queer perspective to a tracklist of pop bangers and R&B mid-tempos. Whether he’s twisting Ultra Naté’s club classic Free into the melancholy bop Paradise or showing off his sensual side on Tongue, MNEK always feels real, cool and compelling; he’s the queer pop star of colour UK music needs.

The artwork alone was enough to get us on board with Tommy Genesis’ self-titled debut album, but . The self-described ‘fetish rapper’ lives up to her moniker on tracks like Play With It (which sees her invite a lover to “play with the pussy” and “get it wet all night”) and effortlessly cool Charli XCX collaboration 100 Bad. But make it through the slew of sexual bops – trust us, there’s plenty of them – and you’ll find Tommy getting surprisingly introspective on tracks like Drive and It’s OK, which also showcase her vocals, proving there’s more to her art than just shock value. “I’m definitely proud of who I am, and I’m proud of how I identify, but it shouldn’t matter, and everyone should be treated with the same amount of respect,” she told us earlier this year of her bisexuality. Talented, sexually-empowered and queer? We stan. Standout tracks: Girlfriend, Doesn’t Matter, Damn (What Must A Woman Do)

It takes an incredibly self-assured artist to create a new persona only two albums into their career, but that’s exactly what Christine & The Queens did on her sophomore record Chris. The pansexual French singer-songwriter took her androgynous identity to new levels with the adoption of Chris, a traditionally masculine character that was intended to “smash against macho culture and macho men” through the music, and also bled into the imagery that accompanied the album. “I felt I had to address female desire and it’s diversity. How sometimes it’s blacked out or ignored. It’s still something quite suspicious or slightly dirty. I felt like it was important to be more unapologetic about that,” she explained. Okay, so Brockhampton as a group aren’t strictly LGBTQ but at least one of their members, Kevin Abstract, is an openly gay singer and rapper. What sets this hip-hop collective and self-described ‘best boyband since One Direction’ apart, however, is that the rest of the members encourage Abstract to unapologetically be himself. On standout track Weight he raps about coming to terms with his sexuality while dating a girl. On Something About Him he is given space to declare his love for a guy he’s into (“his attitude, it’s like magic”). It’s refreshing to hear so many perspectives – both straight and gay – working verse by verse in unison to form some of the most inclusive and exciting hip-hop out there. As far as first albums go, Expectations was pretty damn good. American performer Hayley Kiyoko made her much anticipated debut with the album this year, and provided us with synthpop perfection in Sleepover, Feelings, What I Need and Curious. She was hailed as “the first unabashedly queer female” in pop, which led to her honorific title: Lesbian Jesus. 2018 also saw her embark on a headline tour of North America and Europe, perform with Taylor Swift (twice!), and grace the cover of Gay Times magazine. We can’t wait to see what she does next.

SOPHIE – Oil Of Every Pearl’s Un-Insides Scottish record producer SOPHIE received massive amounts of critical acclaim with Oil of Every Pearl’s Un-Insides, a masterpiece in progressive, avant-pop. Critics lauded the record for its innovative and experimental production (she produced it all by herself) and for dealing with issues such as gender and beauty. Following her universally-acclaimed fifth studio album Masseduction, a hyper-sexual electropop record, St Vincent made a drastic u-turn during the back end of 2018 with the release of MassEducation, an acoustic album featuring stripped-back edits of its predecessor’s tracklist. “Songs are living things. They grow, they evolve, they change their moods and personalities over time,” she explained of the album’s concept. For years, Janelle Monáe had offered subtle (and sometimes not-so-subtle) hints at her sexuality in her music, but 2018 was the year that she finally put speculation to rest: She’s queer, or more specifically, pansexual. Her coming out coincided with the release of her third studio album Dirty Computer, which was the multi-talented singer-cum-actor’s first full-length release since 2013’s Electric Lady, and saw the musical enigma once again mix politics and an effortless sense of social justice with some of the funkiest tracks we heard all year.“I want young girls, young boys, nonbinary, gay, straight, queer people who are having a hard time dealing with their sexuality, dealing with feeling ostracised or bullied for just being their unique selves, to know that I see you,” she said of the record. “This album is for you. Be proud.”