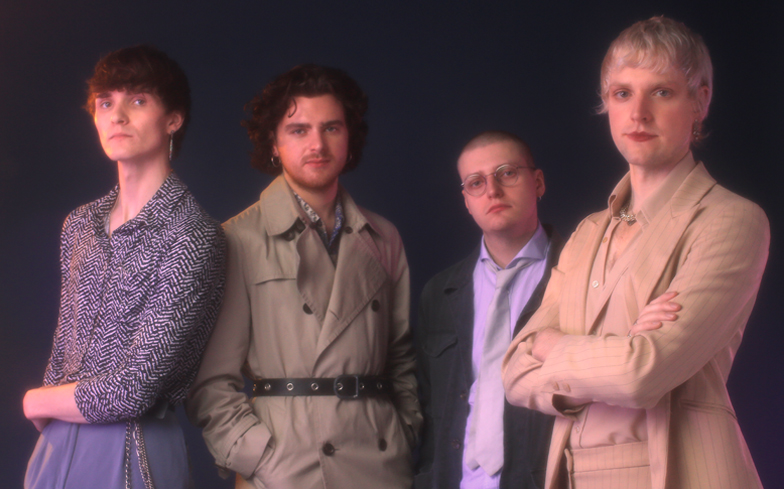 When an album contains songs about an extraterrestrial being discovering love on their final night on this planet (One Last Night On This Earth), and modern enlightenment in the world we currently live in (Illusions), you’d be forgiven for thinking things might start to get too lofty.

But on Sundara Karma’s second studio collection Ulfilas’ Alphabet – out now – they have married big philosophical ideas with classic songwriting, tying it neatly together with a sprinkling of pop.

Led by their gender-fluid frontman Oscar Pollock, the band worked with Everything Everything’s Alex Robertshaw and legendary producer Stuart Price (Pet Shop Boys, Madonna), so that should give you a sense of how exciting it all sounds.

We met up with Oscar in a South London cafe to speak about the band’s new record, the power of gender fluidity, comparisons to David Bowie, and how music and religion have quite a bit in common.

How did the creation of Ulfilas’ Alphabet record differ from your debut?
I was more fearless in writing, and was willing to not judge myself as much as things are coming through. Just being more open with the creative process. In general, it was a very different process. I felt different.

I love the concept behind One Last Night On This Earth – was it inspired by a particular reference?
I personally adore films about romance. There’s that element in there. To do it from the point of view of something that is not human, it almost makes it more accurate as to how you fall in love. When you portray talking about falling in love, you can fall into cliches quite quickly. For me at least, I just found it more authentic. When you fall in love, you start to question how normal you are – at least I do! So I think it was just nice to approach it from that perspective.

In some ways, love when portrayed in mainstream media is a very man-made concept, so when you take that element out of it it becomes more about that innate feeling.
I think when you take the preconceptions out of it, it become a lot more close to home. You’re not having to mould anything to fit a box. That’s what I found really exciting.

And the music video with the foil robot is great. What kind of reaction did that get?
People really liked it! They embraced the playfulness. It’s the perfect visual representation for that song.

There’s a line of merch in there too. That little robot needs to be on a cap.
That’s a good idea. Or even a full robot costume.

When it comes to achieving that guitar band presence but with a pop sensibility, you can’t get a better producer than Stuart Price. How was it working with him?
Just incredible. I couldn’t be any more grateful to Stuart. Not even as just a producer of the album, but as a person to talk to. The conversations we had when I was with him in LA and we were working together and discussing the songs, he is such an open person. That comes out in all the work he does. I am firm believer that the type of person you are has an effect on your creative output, and it always will. My view of Stuart is exactly what he sounds like in that production of the album. I still can’t quite believe it happened.

The reaction you get in the YouTube comments to your gender-fluid appearance is always so positive. My favourite comment was ‘Oscar Pollock is my favourite Disney Princess’. It feels like a real generational shift in acceptance – how have you found the general reaction?
I think that is the case. Obviously there was that whole catalyst in the 60s and 70s for gender fluidity, but for some reason or other maybe that was forgotten about. Not entirely, and it’s always been there, but definitely in terms of the mainstream. But now it’s really being embraced, almost to the point where it’s a bit of a trend, which you have to be careful with. But it’s given people the confidence to be the people they want to be, and feel they need to be.

There was that era where gender-fluidity informed guitar music, but then into the 90s and 00s it became very masculine and it swung the other way. Do you think we’re at a point now where it’s becoming more neutralised?
From my limited knowledge of the way the world works, it seems like things are cyclical. It does seem like – because it’s the nature of people and how we get bored of things and want things that as soon as the world goes too far one way, we want to go the other way – I do think it will go like that. I do hope though, as it’s going from one side to the other, those swings become less and less extreme and we’ll reach a nice middle ground. I think that’s happening. It does feel like that in a generational sense.
Big time. For example, my dad is gay and he only came out when he was 40 years old. He sent me a text the other day of this clipping from an article he was reading about the 80s and homosexuality, and he said, ‘Read this – and now you’ll understand why it was so hard for me to come out.’ There was violence, prejudice, and it’s mental to think about that in the context of the way it’s talked about now.

Even within the language that was used in those news reports.
Yeah of course – it would have been terrifying. So from that perspective, there’s been a huge shift.

For you, what’s the power in gender fluidity?
I can only speak from a personal point of view and how it’s impacted my life, but I think it’s having the power of confidence in your own identity and how you portray yourself to the world. You have that control. For me, not having much control over certain things in my upbringing, to know that it is in my control now and no-one can take that away from me. Obviously I’m fortunate I live in the West because there are people who don’t have that choice.

There has been a lot written about Sundara Karma and comparison to the likes of David Bowie and Arcade Fire, which is huge. How do you find that?
It’s incredibly flattering. You have to take stuff like that with a pinch of salt, because we’re nowhere near those levels of artistic mastery. So to be associated with it is insane. They are definitely people that we admire.

When you use big philosophical ideas to inform your songwriting, what’s the challenge in making it accessible for a wider audience within a pop song?
I’ve found that my filtration system is pretty strong. If I find that there’s a line I’ve written that’s slightly esoteric, I am quick to cut it back. So that helps with the overall scope of the song, and the impact it has with people. The hurdle would be how you portray those ideas lyrically. I’ve always found that pretty fun. You don’t need to be too lofty about it, which I think I’m learning more and more. A lot of the time it’s best to just be simple. Simplicity really is key when it comes to lyrics. Especially if you’re talking about death!

You draw on religious references too, so I wanted to get your thoughts on the similarities between religion and music. Both have the power to tell stories, persuade, and create idols with massive followings…
They are highly connected. Maybe more music and spirituality. It’s that ability to disengage from the world for a bit. Religion offers that moment of stepping outside of yourself. That’s what music does for millions of people. It brings you into the moment unlike anything else that I’ve experienced. At least that’s how I’ve felt with meditation and those really special points when you’re watching your favourite artist perform, or discovering an album that you immediately fall in love with. They are very similar feelings. It’s bringing you into the moment and you’re not thinking about anything else, and that is what some religions would describe as ‘God’.