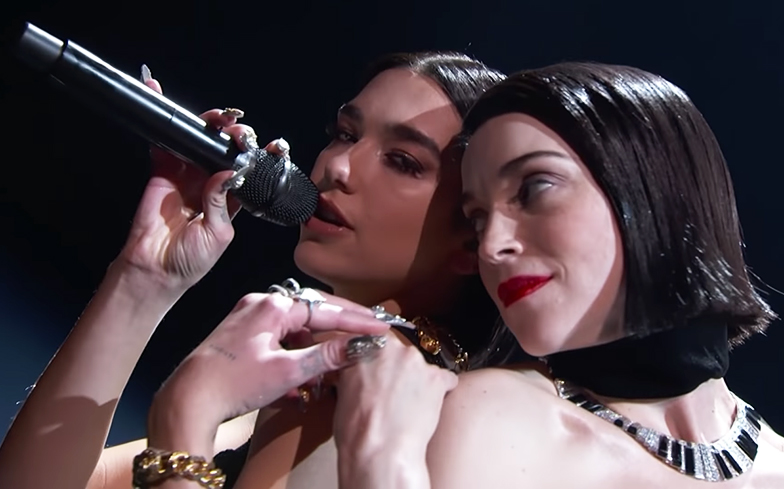 St. Vincent and Dua Lipa gave the gays everything they wanted at the Grammys.

But there was one moment in particular that really got viewers talking: A sexually-charged collaboration between queer singer-songwriter St. Vincent and UK pop’s reigning sweetheart (and huge LGBTQ ally) Dua Lipa.

The set began with St. Vincent alone with her signature guitar performing Masseduction, before Dua Lipa emerged from the smoke for a little R-E-S-P-E-C-T and a seductive duet of her Calvin Harris smash hit One Kiss.

What resulted was a glorious three minutes and six seconds of inviting glances, flirtatious touches and several near kisses – oh, and don’t get us started on those matching dark bob haircuts. Fab-u-lous!

Needless to say, we were entranced by the performance, and so was most of Twitter, it seems.

Me at the St Vincent and Dua Lipa collab pic.twitter.com/4eAKa0BSv7

im the camera man who got gay panic during dua lipa and st. vincent’s performance pic.twitter.com/xVPGZ4ySnE

between janelle monae, dua lipa & st. vincent’s grammy performances, and ari’s “breakup with your girlfriend” video… was this the most lesbian weekend in pop music history?!

St. Vincent and Dua Lipa’s duet wasn’t the only queer moment of this year’s Grammys, as pansexual R&B icon Janelle Monae brought her bisexual anthem Make Me Feel to the stage in an epic pink-hued performance.

Backing dancers sported the eye-catching vulva pants that first debuted in Janelle’s music video for Pynk, while others wore black and white leotards – a fashion statement that you don’t need to have a vagina to be a woman.

Earlier in the week, Janelle dedicated her Grammy nominations to the trans community.