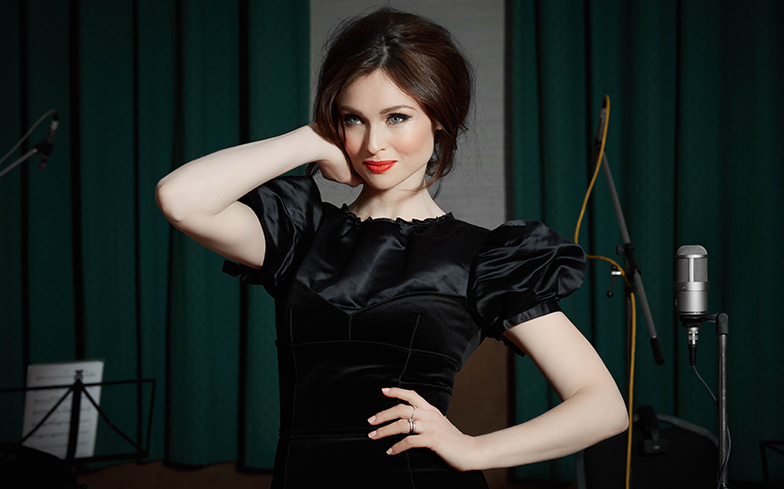 Sophie Ellis-Bextor loves the gays, and the gays love her.

From her breakthrough with disco classics Groovejet and Murder On The Dancefloor through to club bangers like Heartbreak (Make Me A Dancer) and Bittersweet, the iconic British singer’s voice has soared across LGBTQ venues and club nights for two incredible decades.

So it’s not surprising that a collaboration with queer creatives Sink The Pink is on the way, as she joins a host of drag performers (camp!) at Milton Keynes and Hampstead Heath (camp!!) to recreate her biggest songs and music videos live on stage.

“When I was at school, I wasn’t particularly popular and through music I started to find my family,” she says, “and I think that’s a lot of what Sink The Pink is about – it’s about being around people where you feel completely comfortable to be yourself.”

We spoke to Sophie about her love for “bold and beautiful” non-binary artist Sam Smith, why the world should stop putting gender stereotypes on kids, and how the LGBTQ community helped her find confidence on stage.

First of all, Sophie Ellis-Bextor and Sink The Pink together sounds like gay heaven. What can fans expect from the show?
I can’t wait! It’s gonna be so fun. We’re recreating different videos from over the years and doing a sort-of greatest hits, so it’s quite a fun show, it’s me and five queens, plenty of costume changes – I think the word ‘camp’ might come into contact with the show a couple of times.

You’ve performed at a lot of Pride events and now this collaboration with Sink The Pink. How important is it for you to show your support for the LGBTQ community?
It’s kind of vital to me really, I mean the gigs I’ve done at places like G-A-Y and Sink The Pink are among my fondest and happiest shows I’ve ever done. In fact, when I had my first baby, I had quite a lot of time out and I brought out the first single from my third album [Trip The Light Fantastic], I hadn’t done a show for years and I was feeling a little bit… vulnerable, I guess? But I came out and performed at G-A-Y and honestly, it was life-changing really. The warmth from the crowd gave me this confidence to push myself more and since then I’ve really been a lot more uninhibited about the way I perform. So it actually informed everything, really. It’s got a very special place in my heart. Also, when I was at school, I wasn’t particularly popular and through music I started to find my family, and I think that’s a lot of what Sink The Pink is about – it’s about being around people where you feel completely comfortable to be yourself, it’s a really warm and happy crowd, and I love the fact that with Sink The Pink you get people who are way more dressed up than I’ll ever be on stage. I love people watching and the fact that it clearly means so much to people. It’s wonderful to have something like that on the club scene.

When you perform, what songs do you find get the best reaction from the crowd?
Well, I obviously get a reaction from songs like Take Me Home and Murder On The Dancefloor, but sometimes it’s songs like Heartbreak – which is such a banger – and Bittersweet. On this tour with Sink The Pink, we’re gonna be doing all those songs as well as Catch You, Not Giving Up, it’s got a nice range I think.

Disco is having a comeback at the moment, we’ve seen artists like Lady Gaga and Dua Lipa jump on board, can we expect a return to that sound from you in the future?
Well I kind of did it a bit on the orchestral tour last year, so for the last half of the show the band came out and we did loads of songs with the full orchestra on top, which for me is like pure disco because it’s going back to the 70s when everything was bells and whistles and harps, so when I performed Heartbreak with the full orchestra I felt like some kind of disco superhero. The style of disco and the melancholy and the way it can be so empowering, that’s something I try to weave into everything I do really, but pure disco… yeah, maybe. The album I’m making right now is a bit more electro-dance at the moment, but disco weaves it’s way into it because it’s something I’m so into anyway. I don’t know, we’ll see. It’d be fun to do a pure disco album one day, but knowing me I’ll probably wait until it’s really out of fashion [Laughs].

So you’re working on new music(!), can we hear more about that?
I’m doing my third album with Ed Harcourt, we’ve done two before – one called Wanderlust and one called Familia – and we always planned to do three, the first was quite folky, the second had a more dance-y pop sound, and now we’re doing one that’s a bit more electro. We definitely want something that will make people wanna dance, so I’m exploring that at the moment. We’re about a third of the way through, and I’m definitely happy with what we’ve been doing so far.

We loved watching you on Strictly Come Dancing, if there were ever an All Stars season, would you return?
You know what, I probably would, because doing the dancing every day was so completely delightful, and it was also really challenging. It was quite nice learning a new skill. So yeah, if my family would let me spend however many hours a week dancing then sure, I’m up for it, but it was pretty all-consuming, I’m not gonna lie. It’s probably the most intense thing I’ve ever done in my life to be honest.

Last year saw the debut of RuPaul’s Drag Race UK, and so many fans were asking for one of your songs to be used in a lip sync for your life. Which one do you think would be best for that?
It’s gotta be one that’s got some proper drama in it. I think Murder On The Dancefloor doesn’t really have enough colours in it. So you should probably go for something like Heartbreak, because then they can do that thing where they slam on the floor [Laughs] Plus, whenever I perform that I feel like I have to find my inner drag queen. It’s very melodramatic.

Would you ever appear as a guest judge on the show?
Yeah, absolutely! That’d be so fun. I’m a massive fan of Drag Race, so that’d be really cool.

If a drag queen wanted to be Sophie Ellis-Bextor, what advice would you give them?
Well, I actually follow a few drag queens on Instagram who have done my look, and they do an amazing job of it. I’d say go bold with the makeup really, the blue or the green eyeshadow with a good red or orange lip. And it’s not too challenging in terms of the dance routines so it’s probably quit a safe bet really!

You released The Song Diaries last year, which saw you put an orchestral spin on all your classic songs. What inspired that sound?
A couple of things really. One thing is that it’s nice as a singer to approach songs differently and think about what I can bring out of them. I feel like doing a traditional greatest hits is a bit uninspiring really, so I thought it would be nice to reinvigorate things. Also, I found it a little bit scary actually, because singing with an orchestra is quite exposing, and being able to really work with that was completely delightful. Ordinarily, a singer like me would only sing with an orchestra a handful of times for special occasions, so being able to tour with an orchestra and really get over that feeling and start to really have the opportunity to push it was really lovely. Apart from that, I don’t know… I just have expensive taste, really [Laughs].

Who are your LGBTQ icons and why?
I suppose when I was young, someone like Boy George definitely had an impact. I was born in 1979, so I think when Culture Club were first on the scene I was probably only three or four, and seeing this completely beautiful looking young man with beautiful makeup and a beautiful voice appearing on TV and talking so casually and intelligently when being interviewed, not even trying to make a big deal about it, just saying, ‘Well, this is who I am’, he seemed like this extraordinary creature and I found him really captivating. And then in recent times, I know they’ve got fans everywhere, but I think what Sam Smith has done is really incredible, and I’ve had lots of quite interesting conversations with people who I ordinarily think of as being quite open-minded, but they struggle with the idea of being non-binary – and I know that with the terminology, in the English language, not saying he or she is quite tricky – so to go on a public stage with so many millions of eyes on you and to say, ‘Actually, I don’t feel comfortable defining myself as he, I’m they‘, that’s actually incredibly powerful, and for all the kids growing up feeling that way, what an amazing thing to have done. So I’ve had a lot of conversations where I’ll say to people, ‘Imagine how you’d feel if the clothes you’ve been told to put on don’t feel like you?’ You’ve got to have the opportunity to redefine it. It can take a while, but I think things like that make massive changes. It’s very bold and beautiful, and I think it’s really inspiring.

It’s interesting what you said about people struggling to accept or understand non-binary people, because maybe 20 or 30 years ago people were probably having similar conversations about gay people. I think it will take time but the world will get round to it eventually.
Yeah, and the thing is if you think about it, the boxes we’re put in from when we’re small are actually quite reductive, really. I was having a conversation in another interview with Reader’s Digest – which is quite a contrast to this! – and they were saying, ‘If you could change the world, what would you change?’ And I said there should be a regulating body for gender stereotyping in kid’s clothing and toys, because it starts from when you’re really young, and I think it’s getting worse, and I think it’s some sort of weird reaction or fear. We’re now getting much better at letting people redefine their gender and how they articulate themselves as grown-ups, but there’s this weird knee-jerk thing of being like, ‘Okay but little boys are little boys and little girls are little girls’. That’s what it feels like. Why would you keep insisting that boys can’t wear pink or girls can’t play with trucks? I find it a bit frustrating.

As someone who grew up wanting to play with Barbie dolls, I can understand why it’s so frustrating. But I guess people can be sensitive when they’re criticised about how they raise their children.
I don’t think it’s even about telling them how to raise their kids, if boys want to do things that are very traditional ‘boys’ things, that’s totally fine, it’s just about letting kids have choice. It’s more about that for me. One of my kids loves wearing pink, and as soon as they went to primary school, it was all a bit, ‘Maybe I shouldn’t do that’, but it’s just a colour, you know? It means bugger all. I don’t know, I just find it a bit perplexing, really.