Slayyyter is the sexually liberated bisexual popstar you need to stan 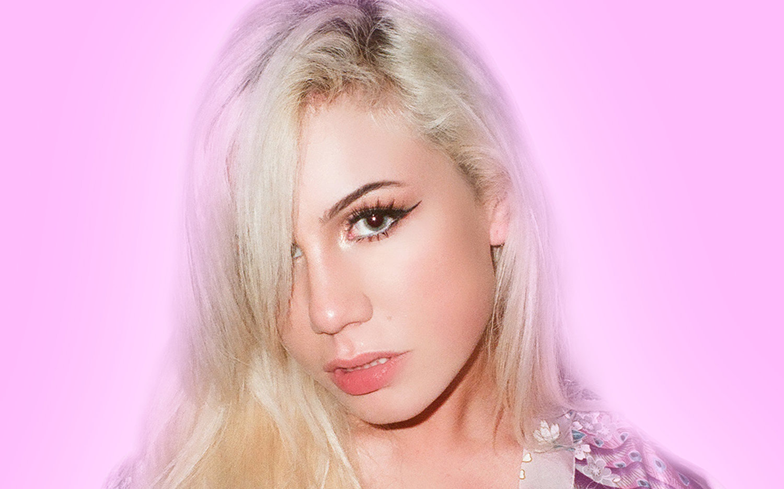 “I finally feel like I’m at a point where I don’t need to hide my bisexuality. I’m ready to fully embrace it and be myself.”

Are you a pop music stan? Do you love a sexually-liberated bisexual pop kween who doesn’t give a F? Well then, you’ve clicked on the right article! Today, we bring you Slayyyter, aka the *future* of pop music. Ya, we said it.

Over the past year, the American singer-songwriter has left gays slain with the release of dance-pop anthems such as BFF, Platform Shoes, Hello Kitty and her most recent bop, Mine, which has become her most successful single to date.

She’s also made waves on social media with her quirky, ‘stan Twitter’-esque sense of humour, where she often finds herself riling up trolls with her “jackass jokes”.

“I feel like pop culture has just become so boring,” she tells us. “Why not be a little catty and funny? Courtney Love used to start so much shit and it was so entertaining and it’s like, why not? Why not be a bit of a bitch sometimes?”

Cattiness? We are here for it! We spoke to Slayyyter about the origins of her stage name and backlash towards women for releasing ‘explicit’ music. Oh, and we launch an official investigation into whether Ava Max truly called her an “ugly rat”.

First of all: how did you come up with the name Slayyyter?
My favourite movie in the entire world is Dazed and Confused, and there’s a character in it called Slater. I always loved that name and I loved him and I just wanted that to be my nickname! It kind of became my original artist name and then I added the y’s for my social media handles. I also love the band Slayer so it’s kind of a double thing there.

And how did you get into music?
I got into music at a really young age, I’ve always been singing and dancing, and I always loved performing. It wasn’t until, I guess, around middle school that I got into choir. Then when I was in high school, I auditioned for an a cappella choir and got in. From there, I just really got deeply into music and started taking it more seriously and I started trying songwriting and all things like that, practicing guitar, piano… I also come from quite a musical family so it’s been my favourite thing.

Who were your inspirations growing up?
Britney Spears for sure, I feel like she’s everyone’s inspiration. Definitely Madonna. I loved Lady Gaga. Heidi Montag’s music had a really big influence on me. I just love strong female pop figures, Janet Jackson, Whitney Houston.

Your new single Mine has blown up recently – did you expect such a positive reaction?
When I first heard the demo for it, I knew immediately that it was the one, like, ‘I gotta have this’. I knew it had a grabbing sound to it. I didn’t expect the snippet to blow up like it did! You never really know what’s going to blow up and what’s not, but today, it hit 500,000 streams – it’s so crazy! It’s my first song to ever do that.

Do you think there’s still a massive stigma towards women who embrace their sexuality in music?
Definitely. I haven’t faced any criticism for real yet, because I’m still pretty underground. Everything’s been pretty positive so far, but I’m sure at some point someone will say my lyrics are vapid, stupid and meaningless, even though to me it’s just sexual liberation. Everyone has a right to sing about the subject matter that they like. To me, I’m very inspired by sex, so I don’t think twice about it. My next song describes that whole mood too, I Feel Daddy AF. I feel like I’m the man, I’m the shit, I feel hot right now, know what I mean? That’s always my mood, so being explicit is just who I am as a person.

Your sense of humour on Twitter is very ‘stan Twitter’, which I love.
That’s always been my sense of humour. I love to make people laugh, so I’m glad that a lot of times my Twitter has become a conversation point in interviews, which I love. Twitter’s my favourite thing. It’s cool people respond so positively to it. Sometimes I do make jackass jokes and I am kind of an asshole, so hopefully people understand that’s just my sense of humour. But yeah, I definitely grew up on stan Twitter and that culture, so I understand the memes and I understand it all! Any time I need to laugh, I go on Twitter.

Fans can take it a bit too literal sometimes, for example your tweet about Ava Max.
I said that she called me a rat and called my ugly which obviously, was just me trolling. It was a joke, but it’s not a very funny one apparently! A lot of people came for me for that, but it’s just my sense of humour. I’m an idiot. I hope people understand that sooner rather than later.

It almost feels like some people want to be offended…
Exactly! At the same time, I feel like pop culture has just become so boring. People jump online like, ‘Hey guys! Love you!’ all this stuff. It’s all good, but why not be a little catty and funny? Courtney Love used to start so much shit and it was so entertaining and it’s like, why not? Why not be a bit of a bitch sometimes? It’s all for entertainment. As long as you’re not being offensive, then I think it’s fun. I’m never offensive. As long as the humour is coming from a place that isn’t harmful to people, then it shouldn’t be taken too seriously. I think I tweeted before that Miranda Cosgrove punched me or something like that… Don’t take it seriously! Most of the time I’m high off my ass when I tweet anyway, so…

You’ve got a massive LGBTQ following – have you noticed?
Yeah definitely! I love that and it’s great to have people embrace me, especially the community I’m part of. As a bisexual woman, I’ve always felt at home with LGBTQ people, so it’s nice that they have picked up my music and taken a liking to me. It feels like a genuine, mutual love.

When did you come to the realisation that you were bisexual?
Honestly, I kind of always knew I liked girls as a kid, but didn’t think it was okay for me too. So I always pushed that down, and I went to Catholic school where I really didn’t want people to think I was a lesbian. I was embarrassed by those feelings, so I pushed past it. It wasn’t until high school or maybe a little bit after, that I realised, ‘Alright, I definitely like boys and girls, I’m not ashamed of that anymore.’ Now that I’m 22-years-old, I finally feel like I’m at a point where I don’t need to hide my bisexuality. I’m ready to fully embrace it  and be myself. It feels good.

Bisexual people are often told that it’s a “stepping stone”, and it still feels like it’s not taken as seriously – have you found that?
Definitely. There’s a lot of bisexual erasure. People want to put you in a category or being straight or gay, and if you’re dating a guy at the time, then you must be straight, even if you’re attracted to females. In the LGBTQ community, being bisexual is not the most oppressed. I definitely don’t feel oppressed because I’m bisexual, but at the same time, I do notice how my sexuality can be erased in some spaces. I never care too much, I just do my thing. People are always gonna be assholes about anything.

Growing up, did you feel like you had much bisexual representation in the media?
I feel like I’m over-represented on TV! I feel like there are way too many people representing me in pop culture and it’s time to shift into a more diverse space where we can have popstars who will represent everyone, and not just blonde white girls. It seems like it’s started to shift into that, and we’re seeing more diverse popstars and it’s great.

What can we expect from Slayyyter over the next year?
I definitely wanna drop a mixtape. I want it to have 12 songs, and I want it to blow people away. I want every song to be fucking amazing. I have some live shows coming up and I’m so excited to perform for people for the first time! I’m more of a performer than anything. I want to keep growing and to pursue world domination. That’s been my goal from day one. My new single, I Feel Daddy AF is wild. It’s like nothing I’ve ever done before. It’s gritty, grimy, trap-influenced, but also a fun, bubblegum pink party song. It’s very horny and very sexy, everyone’s gonna be feeling their oats! I wanna take over the pop sphere and get crazy. I plan on sexually liberating the world!

Slayyyter’s ah-mah-zeng new single Mine is now available on iTunes and streaming services. Listen below.