Showstopper! The Improvised Musical is back in town to delight audiences once again – review 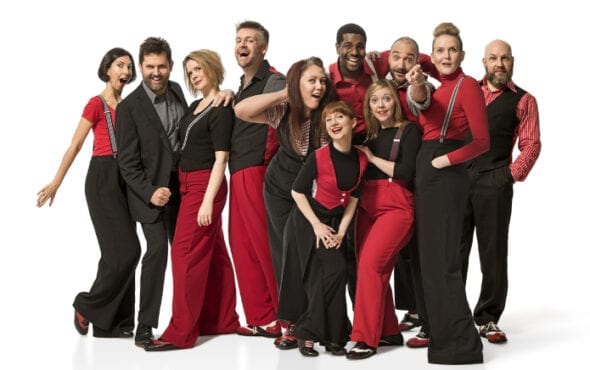 The Olivier Award-winning improv troupe are back on the West End, with a monthly show at the Garrick Theatre.

This is the third time we’ve had the pleasure of spending an evening with The Showstoppers and as such we can verify that each show is completely unique. For those unfamiliar with the group, the premise is that they improvise a musical on the spot, taking suggestions from the audience for plot, setting and musical styles – we’re also allowed to suggest ideas for plot twists mid-show. Our first encounter, A Lotta Dancing, was set on an allotment in Cornwall, with a blossoming relationship unfolding in the local Cornish pasty factory; our second experience, A Change of Direction, saw a group of out-of-work actors returning to a deserted West End to stage the last show in town.

This time we experienced Doggone, which centred around a murder at a dog show, with music inspired by The Lion King, Hamilton, Cabaret and The Phantom of the Opera. The victim is prize-winning asthmatic chihuahua Pegasus – but who did the deed, and why? Was it another dog owner, jealous of Pegasus’ unblemished five-year winning streak? Was it the dog’s owners, hoping to cash in on their lucrative insurance policy? It’s an amazingly creative plot and a real credit to the talented performers on the stage that they’re able to invent something so inspired off the cuff.

We’ve said it before and we’ll say it again – this group can knock a show together in 75 minutes which is more enjoyable than many other shows we’ve seen, some of which may have taken months and months to prepare. It is, of course, not polished – some songs are stronger than others, some dance routines work well while others are a bit all over the place, some punchlines land while others fall flat. But the end product is still a solid musical which would hold its own against most other shows in town – that they’re putting it together on the spot is amazing to watch.

Normally we’d avoid plot spoilers, but given that readers won’t see the same show that we saw, we can highlight a handful of moments. There’s a wonderfully surreal scene where our performers suddenly adopt a Shakespearian delivery style, complete with a messenger who delivers a ridiculously alliterative message; a perfect deadpan throwaway line where one character interrupts another mid-song to remind them they must wear full PPE at all times; and a Cabaret-inspired number, Bye Bye Cynthia, which unlike the other songs in the show goes more for musical excellence as opposed to comedy, and still lands perfectly.

The show features strong performances from all involved, and we should caveat this by saying that Adam Meggido, Justin Brett and Lucy Trodd all bring quick-thinking and wit to the stage – each has a moment to shine – but we ought highlight that Pippa Evans is a genuinely incredible performer. In a show where everyone was funny, her punchlines stood out as the most hilarious, and she’s an incredibly proficient vocalist, too.

It really is a pleasure spending an evening with The Showstoppers and it’s great that they’re back in town to delight audiences once again. It may not be the smartest or slickest show in town, but it’s lots of fun and watching the performers riff off each other to make the scenes up on the spot is a joy to watch. We really enjoyed the show and we think you will too.