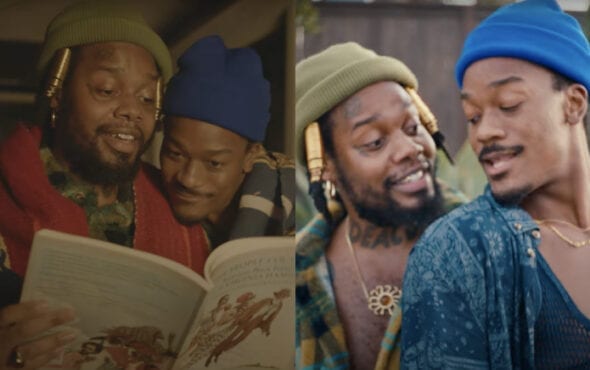 From the beautiful portrayal of black gay love to the incredible vocals and music production, the video is magic.

Rising artist serpentwithfeet dropped his incredible video for Same Size Shoe and it’s everything we could have wanted and more.

The visual is full of feel-good moments, a sickening dance break and romance that will leave you feeling all warm and fuzzy inside.

At the start of the video, we are treated to the singer-songwriter having brunch with his boyfriend.

As the visual continues, the singer-songwriter showcases heartfelt moments and gives viewers a beautiful example of black gay love.

But what makes this video even more amazing is his nod to the iconic Logo series, Noah’s Arc.

In the video serpentwithfeet and his partner are cuddling up on the couch while watching the second episode of the acclaimed series.

At the end of the video, the rising artist gives thanks to the creator and cast of the show stating: “Thank you to all the icons who remind me to be infinite.”

Noah’s Arc, which aired on Logo from 2005-2007, followed a group of friends as they navigated the gay dating scene in Los Angeles. It made history as the first American drama with a cast of all-Black and gay characters.

The beloved series was also notable for tackling social issues that weren’t discussed on television at the time, such as same-sex dating, same-sex marriage, same-sex parenthood, HIV/AIDS awareness, homophobia and gay-bashing.

Although the first season ranked as Logo’s most popular program, the series was cancelled after the season two finale. Fans received closure with a film in 2008, titled Jumping the Broom, which received acclaim from queer critics.

Back in 2020, the series was brought back for a special revival episode to raise money for several Black LGBTQ+ non-profit organisations such as Birmingham AIDS Outreach, CASA Ruby, G.L.I.T.S (Gays & Lesbians Living In a Transgender Society), In The Meantime Men’s Group, LGBT Detroit, Mobilizing Our Brothers Initiative (MOBI) and The Oakland LGBTQ Community Center.

Watch serpentwithfeet’s video for Same Size Shoe below and make sure to look out for his album DEACON on 26 March 2021.