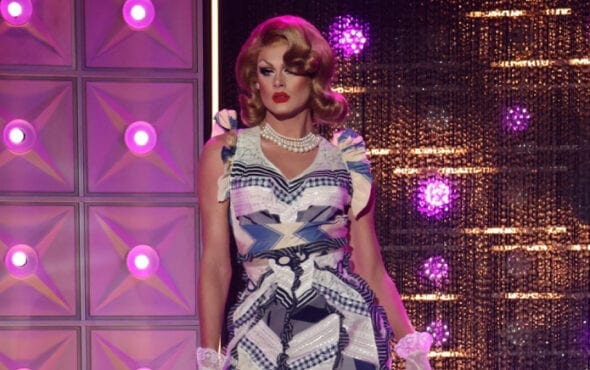 Scarlet Envy was ‘crushed’ over RuPaul’s comments on the latest episode of Drag Race All Stars 6.

For their fifth maxi-challenge, the top nine returning fan-favourites were tasked with hosting a panel talk show called Pink Table Talk, inspired by Red Table Talk, where they shared insight on an assigned topic in three separate teams.

Kylie Sonique Love, Ra’Jah O’Hara and Scarlet chose the topic of motherhood, where the latter opened up about the relationship between her two mothers, who tied the knot last year.

To the surprise of viewers, Scarlet – who has been fervently championed by fans on social media over the past five weeks – landed in the bottom, with RuPaul admitting her performance in the challenge made her “uncomfortable”.

RuPaul’s unnecessarily harsh comments were met with controversy online. One viewer wrote: “RuPaul saying Scarlet made her feel uncomfortable. You know what makes me feel uncomfortable? Constantly forcing your contestants to open up about their traumas that they clearly don’t want to talk about on international TV.”

Others hit out at RuPaul for criticising Scarlet’s “wholesome” conversation, while giving a free pass to other contestants whose actions were actually abominable, such as Scarlet Adams on Drag Race Down Under for her use of blackface.

RuPaul saying Scarlet made her feel uncomfortable. You know what makes me feel uncomfortable? Constantly forcing your contestants to open up about their traumas that they clearly don’t want to talk about on international TV 😑 #DragRace

Scarlet: I have two mothers 🙂

RuPaul: This has made me uncomfortable.

Ginger: I couldn’t take a shit for six months lol

RuPaul: WOW. What an authentic moving performance you betta wark you’re a winner baby have 30,000 doolas and all of my organs♥️

rupaul saying he felt uncomfortable watching scarlet envy in the talk show but he literally let a australian drag queen who did black face on the show?? make it make sense

“This is the way it goes. I’m not here to blame anyone other than myself for shortcomings that might’ve put me here. But, I’m a Pisces!” she said. “I already said I’m emotional and sensitive and messy, so I’m also going to be true to myself here. It’s hard. I can respect someone’s choice and still have my emotions about it!”

The queen called RuPaul’s comments “pretty crushing”, adding: “You never want to make a panel uncomfortable. Even with that critique, I still feel that, especially with my runway, people have different queer experiences.

“We live in a world where we’re coming out of the closet earlier and earlier. That’s not everyone’s journey, and sometimes people get overlooked from other generations and experiences in queerness. Especially lesbians.

“Gay women are fabulous and deserve recognition as well. I think it’s important to use the platform to do that. I feel like my conversations were more meaningful in the Pink Table Talk, and my runway was stronger.”

Scarlet also addressed the critique on her social media as she shared her runway from the episode, alongside the caption: “Feeling a little… I don’t know… uncomfortable.” She ended her post by tagging RuPaul and the series.

The queens still in the running for a place in the Hall of Fame are as follows: A’Keria C. Davenport, Eureka O’Hara, Ginger Minj, Jan, Kylie Sonique Love, Pandora Boxx, Ra’Jah O’Hara and Trinity K. Bonet.

The first five episodes of RuPaul’s Drag Race All Stars 6 are now available to stream in the UK on WOW Presents Plus and Netflix.