Sara Bareilles and Gavin Creel on Waitress, empowerment and the 2020s 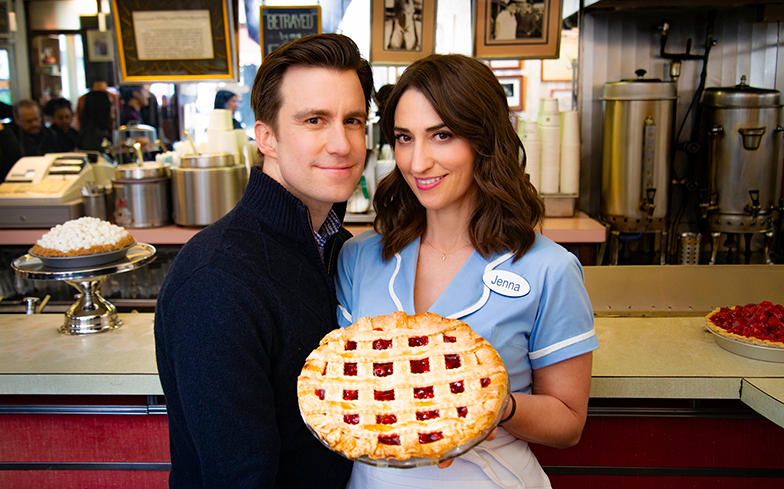 Hot off the heels of her eighth Grammy nomination, Sara Bareilles – best known for her hits Brave and Love Song – will be making her West End debut next week in the role of Jenna in the hit Musical Waitress, the show for which she wrote the music and lyrics. Starring opposite her will be Olivier- and Tony-award winner Gavin Creel, last seen on the London stage when he originated the role of Elder Price in The Book of Mormon.

Waitress first opened on Broadway in 2016, with a London transfer following last year – the show will soon be celebrating its first birthday here. It tells the story of Jenna, a waitress and expert pie-maker trapped in a loveless marriage, whose life is complicated when an attractive new doctor arrives in town. With the support of her friends she attempts to overcome the challenges life has thrown at her. Ahead of Sara and Gavin joining the cast next week, GAY TIMES caught up with them down at the diner for a chat about the show.

Gavin has taken a long break from the West End and for Sara it’s a brand-new experience – joining the cast is something they’re both super excited about. “It’s unbelievable, it’s like a fantasy coming to life, this is so crazy,” says Sara. “We went through the closing of our Broadway show, so to come here and have this new life all involving Waitress, which is by far my favourite thing I’ve ever worked on in my entire life… to be here with Gavin, who’s one of my best friends it’s just a gift, it’s a blessing.”

“Was it that long ago?” asks Gavin. “The weird thing is I was only 7 when I did The Book of Mormon, so I’m only 14 now… it’s great to be back. I didn’t expect this to happen. I was just watching Waitress from the sidelines and fell in love with the show. Sara called last year to see if I would do a month with her on Broadway and then this fall she was like, would you want to come back to do it again in London? And at the end of Broadway I was like, I’m just starting to figure this out, I hate that I had to stop. Now we’re going to get to continue for six weeks.”

Sara will be playing the role of Jenna while Gavin will be starring as Dr Pomatter – we asked them about their roles. “I like that she’s a new discovery every time I step on stage with her,” says Sara. “This will be the fourth time that I’ve been in the show and every time I come back to her, I take something new away from my time with her. She’s scrappy, she’s funny, she’s all the things she says in the songs. She’s messy, she’s kind, she’s lonely… those are all things that I think I deal with myself. I love getting a chance to have dedicated time to relate and study her from the inside out.”

“When I was younger I wanted to be a doctor,” says Gavin. “Then I watched this programme with a lot of blood in it, I was like nope! No thanks! But I love the idea of what a doctor does is helping people, it’s my favourite thing to do as me, Gavin. And the fact that he intersects with this woman when what she really needs is help. She needs an escape route, she needs someone to see her, she needs someone to essentially love her in a way and I think he wants all those same things.

“He’s in a marriage that may not be working and in a new town… he’s moved from Connecticut to Indiana, if you’re from the States you’ll know that’s a very big cultural difference in a lot of ways. They’re both so off-balance and by grabbing onto each other they right each other. That’s a fun thing to get to play and explore.”

Waitress has a big LGBTQ following – they explain why they think the show resonates so strongly with the community. “I think the themes of this show are so universal,” explains Sara. “It’s about self-love, I think everybody, wherever you live on the spectrum of anything, you can relate to the idea that you encounter yourself in a certain place in your life, and you are not who you thought you would become. We all have to figure out how to reconcile that. I think that encouraging people to feel empowered, to reclaim their self-love, is 100% what I would throw my energy behind until the end of time.”

“I mean Sara has such a strong LGBTQ following, Brave is an anthem for our time,” says Gavin. “Personally, most of my closest friends are women. I’m a gay man, I don’t know if that’s the case for all gay men, but most of my friends are women, and the feminine energy can be one that’s so much more welcoming than masculine energy. I don’t mean effeminacy at all, I just mean the yin and the yang, the balance of the two.

“I think because this show has been built with a feminist and feminine ideal, and it’s about celebrating women and allowing women to make choices and control their bodies and own their lives, and discovering who they are and standing up in it, mistakes and all. I think all those things are what speaks to the gay community. Standing up, owning your body, doing what you want, living the life you dream of, I like to think maybe that’s why.”

The show has lots of great songs – what are their favourites, and why? “It’s She Used to be Mine,” says Sara. “It was the first song that I wrote for the show, it has a very special place in my heart but I just think it’s a special song. I was doing a lot of talking to Adrienne Shelly who wrote and directed the film, who sadly is no longer with us. I was encouraging her to come in and be a part of this process with us and I think that song feels special to me because I really feel like she’s very present in that song.

“It’s had a big life outside of the show, and as a writer the greatest thing you can ever hope for is that a song sort of takes flight and has a life in the world without you. And I’ve been so moved by people’s experience of the song and their relationship to it.”

“You Matter to Me. I mean you do, you so do, thank you Gay Times!” Gavin tells us with a grin. “It’s my favourite song Sara’s ever written. I think it encapsulates, in the simplest way, what we want as human beings. To have someone see us and to say, you matter. It’s my favourite song, I play it all the time. Lyrically you might think you’ve heard it before, musically you might have heard it before, but you combine these two things together, in that moment it’s just… so beautiful and simple. It’s my absolute favourite thing.”

We’re going into the 2020s – what does this new decade hold for the two stars?  “Love thyself is my theme for this year,” says Gavin. “I’m 44 years old in April, by which I mean I’m 14… oh no, that would be inappropriate for a gynaecologist to be 14! My theme is love thyself, I can’t turn 44 and still be telling this negative story about myself and my appearance or how I’m bad or I fail. It’s time to accept the positives and just let the negatives go by the wayside.

“Being in a new city with a great friend in a beautiful production will help. Just lean back into life and see what it can show. That’s me. And this is your time too! 2020 is a big deal, you need to start telling yourself, to love thyself truly is to say this is where I belong, this is what I’m supposed to be doing, and not try to prove it anymore.”

“Oh my gosh, well, I need a tiny bit of a break,” says Sara. “I’ve been going pretty hard for the last handful of years. I hope that I find me and my loved ones safe, happy and healthy. That’s all I could ever hope for. And with my apartment’s renovations finished! Can I be really brass tacks about it? My apartment to be finished is what I want!”

Sara Bareilles and Gavin Creel will be joining the cast of Waitress at the Adelphi Theatre in London for six weeks from Monday 27th January. More information can be found here.