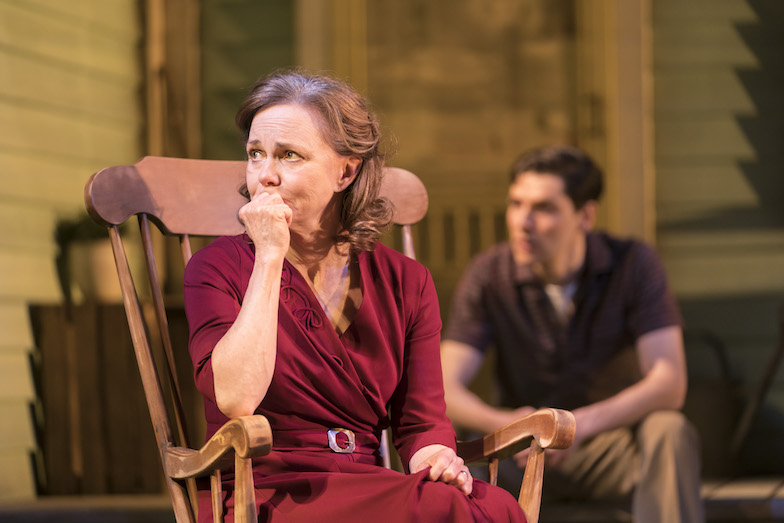 Theatreland is used to have some big names at the front of its work, but this Old Vic production of Arthur Miller’s first great play is perhaps littered with more names that you could ever wish for. And none come greater in name (or talent) than Mrs. Doubtfire star, Sally Field. Hollywood actress, loud and vocal LGBTQ rights activist, and all-round icon!

It comes as no surprise to any of us lucky enough to see All My Sons that Sally Field is the standout actor here. The vision of a perfect housewife and a woman devoted to her husband and family, she travels through the first act pushing away closing forces and returning faces as they seem to disrupt her seemingly perfect life. But behind closed doors, it soon becomes clear that the stable woman exterior is hiding a wealth of troubles in herself and her family, too! And, in true Sally Field style, they slowly creep out and pop their heads up – many to rather hard consequences towards a thrilling final 30 minutes of the play.

Small in voice and heartbreaking in performance, witnessing Sally’s performance feels like a privilege. A cliché it might be, but it’s true. Layered and complex, it’s a masterclass in character and storytelling, cementing why London is home to the very finest in talent currently – becoming the go-to place for people to flock to.

Sally joins fellow A-lister Bill Pullman as her husband – a man with a vault full of secrets and lies, as their child – played by Colin Morgan – begins to ask questions that present problems for his parents. Clearly a man of great acting experience, he runs around the stage trying to keep together his family and their secrets just that – a secret. Joined by Colin Morgan and Jenna Colman, the pair present pockets of greatness on a stage that belongs to their older colleagues.

Jeremy Herrin’s production does feel brave. It’s bursting with talent but does remain on one level until the final moments. It’s quiet – perhaps a little too quiet during some of the tender moments – but it’ll have you hooked until the sun finally goes down on the once ideal family life we were first presented with.

And with two powerhouse titans like Field and Pullman at the helm, this production of All My Sons will be the best thing in your calendar this season.