Raymond Braun on the importance of LGBTQ people knowing their history 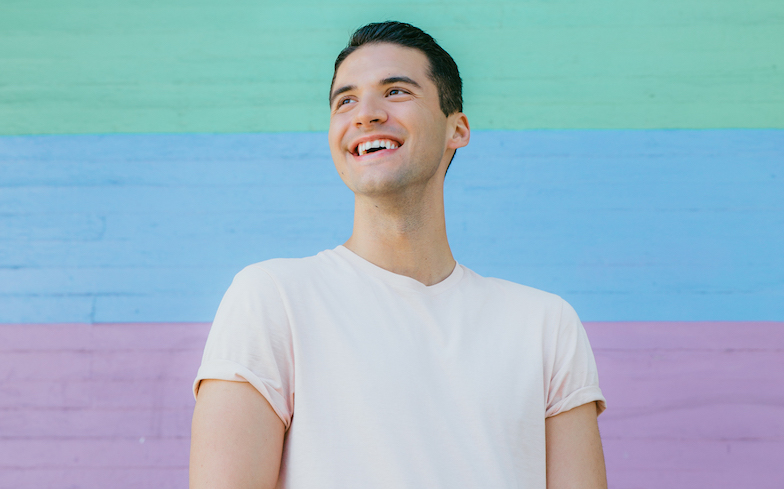 The LGBTQ activist on his incredible new documentary, State of Pride.

Earlier this year, LGBTQ activist and social media influencer Raymond Braun commemorated the 50th anniversary of the Stonewall Uprising with an educational and eye-opening documentary about the importance of Pride Month.

Teaming up with Oscar-winning director Rob Epstein (The Times of Harvey Milk) and Jeffrey Friedman (End Game), the one-hour long documentary follows Raymond as he travels to three diverse communities – Salt Lake City, San Francisco, and Tuscaloosa, Alabama – and speaks to various members of the queer community about the month-long celebration.

We recently caught up with Raymond and discussed the lack of education surrounding our history, his personal queeroes and the importance of making sure Pride is a protest, as well as a celebration.

Why was it so important for you to make this documentary?
I think that there are so many different opinions and perspectives about Pride. In light of the 50th anniversary of Stonewall, which we know is such an important moment in LGBTQ history and what birthed Pride, I thought it would be an amazing opportunity for all of us to be in conversation with each other and put forward some conversations of what Pride means. One of my favourite lines in the documentary is “Pride is both a party and a protest”, and it feels like in recent years people have really dialled up the party aspect without necessarily understanding the protest and history aspect. And so I was struck with this idea that, just because you identify with one letter in the LGBTQ acronym, doesn’t mean that you are inherently an expert or understand what people have been through and what it’s like to be another letter in the acronym. We say the word ‘community’ a lot, but I think we could do a better job at actually being in community with each other, and talking to people who have different backgrounds and lived experiences and perspectives and identities than us. I wanted to try to create something where people really got a wide range of perspectives on Pride, even people within our community may learn something about the challenges that others are facing, and to encourage them to advocate for each other. Why do you think so many people in the LGBTQ community don’t know their history?
First and foremost, there’s a lack of education about queer history and the contributions of the LGBTQ people in American history. I got one sentence about Stonewall in my high school American history textbook, one sentence about our entire community and movement, and that’s more than a lot of people get. It starts with actual education and curriculum in our high schools and universities, where there’s a base level of LGBTQ history situated within broader conversations around civil rights and social injustice in our country. I think it also comes down to having more diverse friends groups and encouraging more intergenerational conversations. Being able to learn about history through personal stories and narratives, people who were there, we still have that opportunity, and it’s such an exciting opportunity for us. The generation who were there at Stonewall, a lot of them are still with us – and so we need to encourage more intergenerational dialogue. We are part of a really incredible community, I am in awe everyday of the brilliance, the creativity, the passion, the humour, the intelligence and the resilience of queer people. Let’s get to know each other better and chat with everyone more. That’s one thing about Pride, it’s truly an opportunity where everyone in the community comes together.

There are a group of right-wing bigots trying to hold ‘Straight Pride’ in Boston – what are your thoughts on this?
Whenever people ask me, ‘Why don’t we have Straight Pride?’ I say, ‘First of all, watch the documentary and you’ll see that Pride, for us, was born out of rebellion and protest and activism.’ It is a historical connection to our community and to our LGBTQ trailblazers. There’s a lot of rebuttals that people share on social media about not having Straight Pride because you can get fired from your job, kicked out of your home, ostracised from your family, lose medical care and access, be unfairly targeted, discriminated, harassed and experience violence simply for your identity. Talk to me about Straight Pride when you’ve had to spend years with society telling you to not be who you are. To me, when people ask that question, it demonstrates a lack of education and empathy around what Pride means, and what LGBTQ people have gone through. I would encourage people who are asking that question sincerely to seek out education and to also seek out a more diverse group of friends. Anyone who knows someone who is LGBTQ isn’t asking that question. You recently uploaded a photo of your mum ironing your Pride flag – what would a moment like that have meant to your closeted teen self?
I’ve done a lot of work to try and understand why I was so self-loathing as a kid, because I always did have a very supportive and loving family. I internalised the messages from my community because I was bullied relentlessly and the word ‘gay’ was weaponised against me. I didn’t wanna disappoint people and I felt so much shame that I didn’t wanna come out, and I thought if I was successful in other areas that I’d be able to mask this thing that I thought was so bad. I was the stereotypical type A perfectionist, like, ‘Let me channel all this into achievement so I can cover this.’ I feel guilt that I didn’t come out to my family sooner and give them the opportunity to show their unconditional love. I truly don’t think I would’ve believed it, believe that I would be going to a film festival presenting a film alongside two of my idols as a kid, with my mom proudly ironing the flag. It just felt like one of those dream come true moments. When I was in high school and I was in the closet, I did a research project on LGBTQ history and the very first documentary was The Times of Harvey Milk by Rob Epstein, and as I was researching Rob, I found out that he was the first openly gay man to win an Oscar. And when he gave his speech in the 1980s, he thanked his partner, which was revolutionary at the time to see a young, successful gay man be honoured for his work. Those men were role models for me, and so to flashforward and be able to work alongside Rob and Jeffrey Friedman, and have my mom there…

Throughout your career, you’ve met some incredible LGBTQ stars and activists – who would you say has had the biggest impact on you?
My friend Blossom Brown has made a huge impact on me. She’s a trans activist who lives here in LA. I’ve always thought that creating genuine friendships with people, that’s how you can be the best ally and advocate for each other. With that day-to-day relationship and friendship, you start to organically see the challenges people face, whether it’s discrimination in employment, trying to get a job, walking down the street and seeing your friends get taunted. My friendship with her and seeing her resilience, seeing how she’s navigated different challenges has really impacted me. We can talk about these specific issues in our community, but when you have a personal face on it, when it’s your close friend, it completely changes the emotional stakes for you. I would also say Asia O’Hara. I really looked up to her before we met on Drag Race because I was aware of her in the pageant scene, I loved her drag, and she’s always combined her drag artistry with giving back and helping people – and that’s exactly what I’m trying to do. Tyler Oakley has also been one of my closest friends for years and he’s given me so much advice, he’s been such a champion of the documentary. He’s one of the OG queer people on YouTube who have shared their story and used their platform to open up conversations. during the filming of LGBTQ documentary State of Pride during the Druid City Pride Festival in Tuscaloosa, Alabama, October 14, 2018.

How important do you think it is for people to use their platforms to raise awareness for LGBTQ rights?
What I always say is that it’s a missed opportunity if you have a platform and don’t use it in some ways to try and empower or educate your followers. My parents always raised me to give back. If you have an opportunity and a privilege and an access, it’s always important to think about how you can share it or utilise it. How do you want people to feel? How do you want them to be impacted when they’re looking at the content you produce? There can be so much negativity and hate on the internet, so why not think about leaving people with a message that’s going to give them some sense of empowerment or hope? I always like to focus on uplifting the positivity that I see online or the stories that are important to tell. And if you have a social media profile, you have a platform, period.

What advice would you have for young queer people who are struggling to come out?
I would say there is no rush, I think people put so much pressure on themselves to figure everything out, especially when you’re younger. I’m still figuring it out, most people I know are still trying to figure it out, so there’s really no rush and the most important thing is your safety and well-being. The second piece of advice I would give is to seek out someone who you know is 100% going to be an ally to you. When you’re at your most vulnerable, I want you to be able to get a big hug and for someone to tell you how proud they are of you. That will create a sense of momentum to help you with the more difficult conversations. And while you’re in the closet, immerse yourself in our history and the different perspectives and backgrounds of LGBTQ people. I think it helps undo a lot of the shame that we have whilst in the closet and creates a sense of excitement about what could be ahead for you.