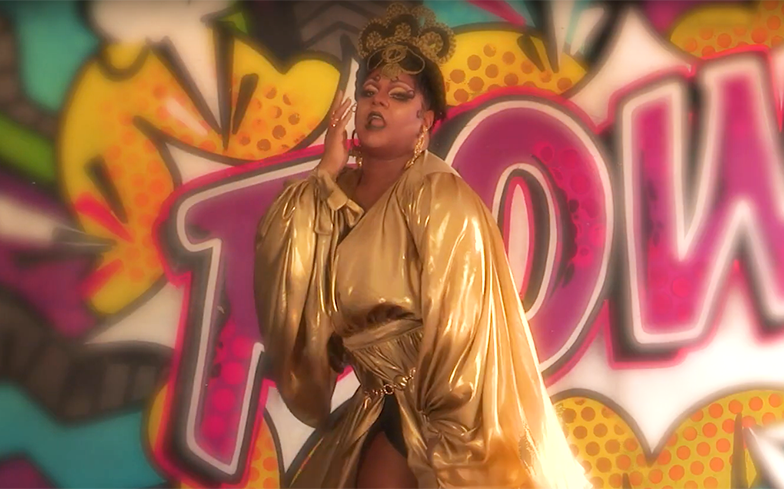 “Shake that ass all night!”

Vinegar Strokes has released the music video for her debut single CAMP and whew honey, it does exactly what it states on the tin; serving pure and unadulterated camp as well as hodgepodge fabulousness.

Shot at the Prince of Wales bar in Brixton, the visual showcases the Drag Race UK star and a host of queer talent such as Poppicock, Veronica Green and Vera as they perform dance routines in sickening 80s-inspired lewks.

“Ello darling! I bet you never thought you’d see a show starring a working-class black bitch with thick legs and fake tits,” she hilariously sings on the disco banger. “I know you find it surprising, I’ve even got your mum dutty-wining.”

Vinegar told us that CAMP! was created in an attempt to be “the next big dance craze anthem with an LGBTQ twist”.

“I’m really into retro funk, disco music and I think lots of people love a good old 80’s bop so CAMP! was born!” she explained.

“In my head a camp queen can literally be anyone, so whether you’re a drag queen, a bear, a lipstick lesbian, a hard nosed aunt who loves a gin and tonic and a fag, who cares? You can be camp and more than likely you are CAMP!”

Vinegar joked that her straight 40-year-old brother who “works on a building industry site” loves the song so he’s officially a camp queen. “The song is for everyone, it’s inclusive and just reminds us to not take it all too seriously,” she added.

“Just have a great fucking time and get camp. Get down!”